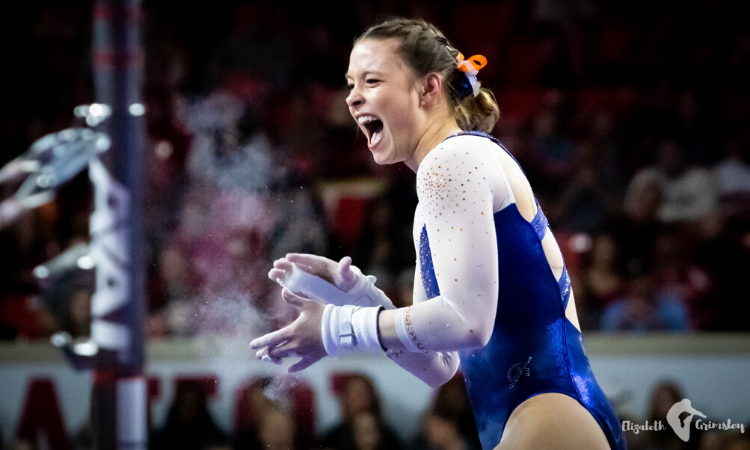 The first official Friday Night Heights of the 2020 season is here, and we’re kicking off our coverage of it with a  matchup that will provide a first look at two of the most intriguing teams in the SEC: Arkansas at Florida. I don’t know about you all, but I’m excited—and also seem to have a strong craving for fajitas.

Florida had the most disappointing (some might say soul crushing) finish of 2019 when it fell short of qualifying to nationals in the upset heard ‘round the gymternet—landing it in 10th place, its lowest finish in 17 years. The Gators are undoubtedly fired up and ready to remind everyone that they are not only a team that expects to make nationals, but one that expects to contend for the title as well. Florida has remained relatively mysterious about predicted lineups, with our best preview coming just a few weeks ago as videos of the intrasquad were posted. The task at hand for the Gators will be replacing the routines of a key all arounder (Alicia Boren) with a signing class of just one gymnast (Payton Richards)—meaning the team will have to look to returning gymnasts to step into those lineups. That being said, we can absolutely expect to see Richards in the mix, likely on vault, with other events as possibilities as well down the road.

The big story for Arkansas is of course the debut of first year head coach Jordyn Wieber, who takes over for Mark Cook after 17 seasons at the helm for the Razorbacks. This will be the first opportunity to see what, if any, changes she has made to potential line ups or overall competition readiness. Ultimately Arkansas lost four key routines across all events, but it should be able to fill those gaps with returning gymnasts getting into new lineups and utilizing freshman. The key to improvement will be consistency; while individually capable of putting up great routines, the Razorbacks struggled to put together a solid lineup multiple times last season—on bars and beam especially.

In an interview released on Thursday morning, Wieber said that a few familiar faces would not be competing tonight: senior Hailey Garner will be sitting out due to a concussion sustained at the Meet the Gymbacks preview a few weeks ago, senior Sarah Shaffer will be limited to vault and sophomore Amanda Elswick is still coming back from injury. The good news is this means we may get to see more from the newcomers.

All in all it should be a fun way to kick off Friday Night Heights. Let’s get this party sizzling (sorry, the fajita metaphors will stop soon. I think).

You can follow along on SEC+ and catch live scores here.

Looks like Florida freshman Payton Richards will be competing three events tonight! Alyssa Baumann returns on vault. Arkansas has almost all of its freshmen in the lineup tonight as well.

They lowered Yamzon’s core to 9.675. Interesting.

Gillings (ARK): Blind change to piked jaeger, hands slipped and she fell. Bail to handstand was a little short. Slight step back on dismount. 8.950

Schoenherr (UF): Y1.5, hop forward but good vault. Slight knee bend in the air but I don’t know how much the judges can see that. 9.800

Richards (UF): Y1.5, hop forward. She went out of my screen as well but I think that might be the camera angle’s fault. Form looked nice in the air. 9.850

Hundley (UF – EXH): FTY. Some knees in the air, slight hop back.

The Gators lead after the first rotation, and both teams showed some first-meet adrenaline and nerves, with one fall for each team. Luckily neither team will need to count the falls, and while both teams scored lower than they would like to, it is January and all of those deductions are things that can and will be smoothed out over time.

Freshman Payton Richards has the top score on vault, not bad for her first routine as a Gator.

Hundley (UF): Gorgeous routine from Hundley, stream paused and I missed the first half but that dismount was gorgeous and stuck cold. 9.875

Rogers (ARK): FTY. Good height, big step to the side.

Thomas (UF): pak salto, some leg sep but beautiful otherwise.  I think she held that bail to handstand for a solid minute there. DLO dismount stuck. 9.925

Alright these camera angles are going to make me dizzy, here.

The Gators had a great bar rotation – I think almost everyone stuck or mostly stuck their dismount, which we know would make Tim Daggett happy (Gymnastics 101 people!)

Arkansas had some form and landing issues on vault, but overall it was a solid rotation without any major mistakes. Like I mentioned before, the mistakes are things that can and will be cleaned up as the season progresses.

Hundley (UF): front aerial to sissone, solid. BHS LOSO. beat jump to switch side, solid. Full turn was good. RO 1.5, stuck and she is very happy about that. Great start for Florida. 9.825

Richards (UF): Full turn was solid. BHS LOSO LOSO, well done. Smiling about that. Pretty leap series. Side aerial to full dismount. Some legs on the aerial and a little hop on the landing. 9.825

Hickey (ARK): Double pike, a little off to the side and almost went out of bounds but saved it. Second pass 1.5 (some legs) to front layout. Solid double back for her third pass. 9.750

Hambrick (ARK): Big double back to start, wow. Second pass front handspring to layout to stag jump (I think, the name is escaping me). Leap series shows off her flexibility but a little bouncy. Roundoff double pike to finish, also big. Nice routine. 9.825

Lovett (ARK): DLO to start, damn! Early in the season to see those. Front layout front full, hopped out of the landing with a little too much power. Huge double back to finish, almost stuck it. What a great freshman debut! 9.825

Thomas (UF): Gorgeous leap series, she has beautiful extension. Everything she does is graceful. One armed BHS LOSO, very fun. Front aerial to beat jump . side aerial to 1.5 dismount, stuck. 9.975 (one judge gave it a 10!)

Carter (ARK): Big double back to start, nice. Second pass front 1.5 to 1.5 to layout. Big double pike to finish. All in all beautiful and clean routine. 9.875

Well, Jordyn has proved she is a floor coach extraordinaire with that rotation from Arkansas. It will be fun to watch them continue to improve throughout the season. Freshman Bailey Lovett came in hot with a double layout, which is something I feel like we don’t usually see until a little later in the season. I’d check your fantasy gym conferences to see if she might be available if I were you.

That was also a gorgeous beam rotation for Florida, lead by Trinity Thomas with a 9.975. One judge did give her a 10 – so I think #Trinity10Watch is officially off to a good start.

I am real excited to see Florida’s floor routines. The previews made them look very fun.

Johnson-Scharpf (UF): Ok, I love her sass on floor. Double pike, controlled step back. Second pass 1.5 to front layout, nice. Okay, that’s a fun leap series. Loving the dance on floor, as are her teammates. Double back to finish. Great routine. Might be the best I can remember seeing her do. 9.775

Gianfagna (ARK): BHS LOSO, some bent knees but solid. front toss, looks like she was maybe going to connect into something else. missed the back half of that routine because my dog decided to step on the remote temporarily turning off my stream. 9.800

Gowey (UF): Front layout, front rudi to start. Gowey’s music is always so dramatic, I love it. Her extension is so pretty. Leap series was beautiful. Huge double back to finish. 9.800

Lovett (ARK): Good switch leap split jump. Front aerial to LOSO, that’s unique. Switch side and she comes off. Gainer pike dismount, small step. Jordyn had very intense stare-down at the end of the beam that reminded me of Miss Val. 9.150

Hundley (UF): I am obsessed with this classic rock mix. So perfect for her. RO whip to double back, nice. YES TO THIS DANCE. Fun. I think my age is showing. RO BHS double pike. Great leap series. 1.5 to front layout to finish. Her energy on floor is contagious. 9.850

Hambrick (ARK): BHS LOSO, takes a step out of it but saves it. Foot comes up on her leap series. Just seems to have some jitters. Straddle 3/4, that’s unique. Gainer full off the side for a dismount, slight step. 9.625

Baumann (UF): Did I read somewhere that they call her the Ice Queen? Because I dig it. Powerful double back to start, you can tell she is also training a DLO. Second pass was clean as well. Nice leap series. Stuck double pike to finish. I always really enjoyed her on floor. 9.850

Sydney Laird (ARK -EXH): side aerial side aerial. Pretty split on the beam. Little short on the split 3/4. Side somi. Gainer full dismount. Probably one of the best routines to be honest, I wouldn’t be surprised to see her in future lineups.

Halley Taylor (UF – EXH): Full-in for a first pass, nice. 1.5 to front layout to stag jump. Stuck double pike to finish. I believe this was her first college routine?

Well, that went about as everyone predicted, I think. Some big scores for the Gators, on beam especially. Of all the routines that I think could have gone for the 10, I’d say Trinity on beam was the one. That has to happen at some point this year. Florida as a whole looked really solid and ready for the season.

It was a decent first meet for the Razorbacks as well, despite some mistakes and little issues they will no doubt be working on fixing in the weeks to come. Starting their season on the road against Florida isn’t the easiest opening meet. We also can’t forget that Arkansas was missing some key routines tonight – Hailey Garner and Amanda Elswick will certainly be called upon as soon as they are healthy.