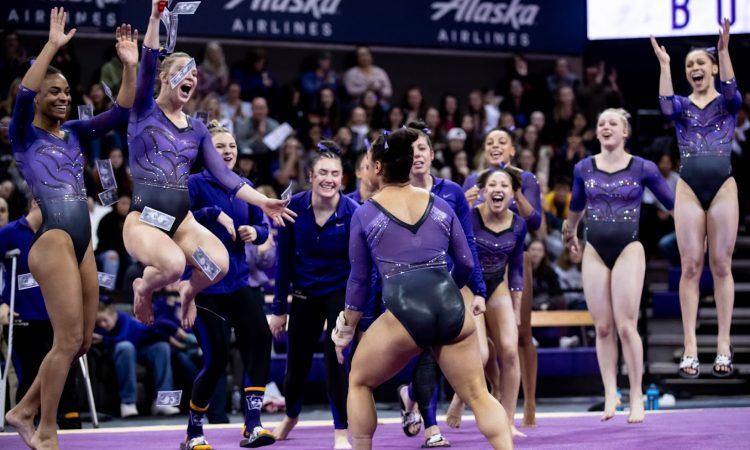 Wow, Elise Ray Statz is coming home! She has such a close relationship with Bev Plocki. In fact, Bev is part of the reason that Elise ever considered coaching as a career! Ann Arbor means so much to her, and she still holds program records there! She’ll get to join Natalie Wojcik in Crisler as the only two Wolverines ever to win a national championship on beam! Also, she’s not actually coming because she’s three seconds away from giving birth. Sorry about the misunderstanding!

Apart from that, this is one of those funky tri meets where the final result is almost guaranteed. Oh well. There’s still plenty of fun to be had.

Michigan’s monster sophomore class is only beginning to show us what it can do, but most eyes will be on the freshmen. Almost everyone who watches NCAA gymnastics, from the most casual to the most focused, will tell you that the best freshman of the 2020 season is going to be either LSU’s Kiya Johnson or Michigan’s Sierra Brooks, but will have a lively argument with you over which one. Johnson has made her opening gambit, registering a 39.000 last week (and in just a few hours she’ll get another chance). Sierra Brooks, your move.

Washington doesn’t have much in the way of newcomers, with the combination of haphazard recruiting and autumn injuries that we’re so used to from the Huskies. But the upperclassmen have likely got this under control, between seniors Evanni Roberson and Madison Copiak and fifth-year Kristyn Hoffa, who after years of fighting injury seems to have had the strongest preseason of her college career.

From Texas Woman’s, I honestly don’t know what to expect. A 193 would land the Pioneers solidly at the top of the conference and USAG national rankings, but they’re a team that habitually builds slowly through the season, so I won’t panic over less. Their 2019 season was marred by a series of miserable and illogical falls, mishaps and injuries, so while I have high hopes for the senior season of superstar Bria Northrop and an intriguing freshman class, for today I’ll settle for “minimal danger.”

We’ve heard that Anne Maxim may have hurt herself in the meet warm up, sounds like an elbow. It’s not Michigan without a depth crisis. On the bright side, per a recent interview with Bev Plocki O’Hara is back and ready to go!

Heiskell (Michigan): Yurchenko full, not the most open and overrotated a touch with a big step back. 9.775

Johnson (TWU): Tkachev, soft legs under the bar, bail with a bit of a break. Blind full double back strong with a hop. Secure hit is what the Pioneers need. 9.45

Brenner (Michigan): One and a half, pikey but big with a small hop forward. 9.85

Brooks (Michigan): One and a half, huge, medium step forward and then shifts her back foot too. Pure nerves but still a really strong college debut. 9.875

Bonzagni (TWU): Blind to Jaeger, too far and splats. Cut in and out a bit and caught a solid landing on a double back dismount. 8.85

Wilson (Michigan): Strong one and a half, twisting onto the table a bit, just one foot step in place. The best of the six. 9.9.

It looks like Washington has dropped Brenna Brooks, who has had some injury questions, and will be going five up on floor. There ought to be backup routines on floor.

Roberson (UW): People keep being in the way of her leaps. Her Rudi to LOSO flieees. End of routine. 9.85

Hoffa (UW): Full in, slightly big lunge but lovely in the air, front lay front lay for some reason with a hop out. Double back a little underrotated, lunge forward, not bad but definitely an ankle sting. 9.7

A bit painful for TWU but great experience for an extremely, extremely young lineup. Washington didn’t do anything special but it could be a lot worse, and Michigan’s baseline with landings still to find being a 49.3 is very good news.

Copiak (Washington): Twisting on hard but good vault with a small hop.

O’Hara (Michigan): Blind to Jaeger, high, a touch clumsy but nothing bad. Great bail, double lay piked in the second salto with a step back.

Smith (Washington): Tuck one and a half, big hop to one side, debut routine for the Huskies after transferring from Eastern Michigan.

Roberson (Washington): Best full of the lineup, piked down a touch but gets her chest up and sticks.

Brooks (Michigan): Pike Jaeger and falls awkwardly to one knee. That sucks. Toe to bail, great, FTDLO with a hop.

Woodring (TWU): Switch switch, almost comes off the side but holds on.

Wojcik (Michigan): Clean through, small step on the double layout.

Heiskell  (Michigan): Great Jaeger, BEAUTY of a Pak to switch kip. Blind full double back stuck. Lowkey the best routine of the lineup. Good riddance to your bad Tkachev. 9.9 SHE JUST WON THE MEET FROM THE EXHIBITION SPOT I- Please at least announce her as an honorary winner during awards.

Vincent (TWU): BHS LOSO, ugly leaps. Check on a full turn, off on her leap series. Third miss for the Pioneers, gainer full piked down with a hop. 8.55

Not Texas Western’s day. (Sorry, the commentator is obsessed with calling them that. Washington is in a pinch between Brooks and Thompson being out for no obvious reason, but it’s fighting even with five up per event. Michigan looking strong but with room to improve on bars, namely by putting Heiskell in over Farley.

Mariani (Michigan): Missed the first few skills SORRY MADDIE. Beat jump switch side, one and a half twist dismount with a hop. 9.725

Heiskell (Michigan): Off to one side and off on a side aerial. Split straddle quarter, one and a half dismount strong landing (though her feet were out of frame).

Farley (Michigan): Bend check on the triple series and arrests it QUICKLY. Things went downhill and back up for her very quickly there. Split split 1/2, one and a half turn! I love that. Side aerial to split, gainer pike low with leg split and I think a small step. 9.5

Kunzman (TWU): Double back underrotated with a big step forward but hangs onto it. Ambiguously rotated leaps, one and a half front lay. 9.475

Brooks (Michigan): BHS LOSO strong, switch switch really good. Usually that’s a series with split issues but hers is good. Turn, double back with a small hop. Nice one! 9.875

Funk (Michigan): BHS LOSO a little overrotated, hangs on without too much drama. Switch side quarter, full turn, beat jump straddle 3/4. Side aerial back full stuck. 9.725

Wojcik (Michigan): National champion back at home! Switch split, BHS BHS LOSO off to one side and drops off. Side aerial, one and a half well landed (again, we can’t see feet in these shots). 9.275

Washington is gritting out a really impressive week one meet despite only putting up five competitors on two events, with a lot of important routines missing. Beam still to go, but pulling off the upset here on pure competitive mindset would be a big deal.

This is pretty much my take on the meet thus far. Michigan making silly mistakes and Washington is just not making any.

Sorry, my stream died for a second and I mostly missed Funk but I think it was solid. Funk doesn’t really make mistakes on floor.

Brooks (Michigan): Full in, perfect college lunge. I forgot to write about the rest because I was having too much fun but she rocked it.

Washington (Washington): Side aerial to straight jump?? Switch side to straddle, beauty. Full turn lovely, side aerial tuck back full.

Ruttan (Washington): Side aerial LOSO, off to one side in the way that made me sure she was coming off and she just presented and moved on with her life. Switch split, one and a half twist with a step forward.

Wilson (Michigan): Full in is a BEAUTY, strong second pass, switch side straddle 3/2 her straddle positions are unreal. Double pike hop to lunge. Good one.

Copiak (Washington): BHS LOSO with a check, switch side small adjustment. Cat leap, bails out of the series and retries it. Cat leap side aerial tuck back full with a hop back.

Heiskell (Michigan): Landing errors on both of the passes we saw. Odd choice for a floor anchor but good that she’s someone the coaches feel they can rely on.

Michigan has won the meet, but Roberson can win the AA.

TWU squeaks just ahead of Bridgeport’s meltdown in USAG standings, but won’t be thrilled with that day. Great to see so many freshmen in lineups, though!

Michigan and Washington will both feel that they missed opportunities in that meet. In a shaky (and I suspect underscored – both of the routines that we saw in full went two tenths lower than I’d have given them) beam rotation, Washington gave away a chance to win the meet, while Michigan wasn’t far away from a first meet 197 before two beam falls. Nonetheless, a lot of potential across the board.