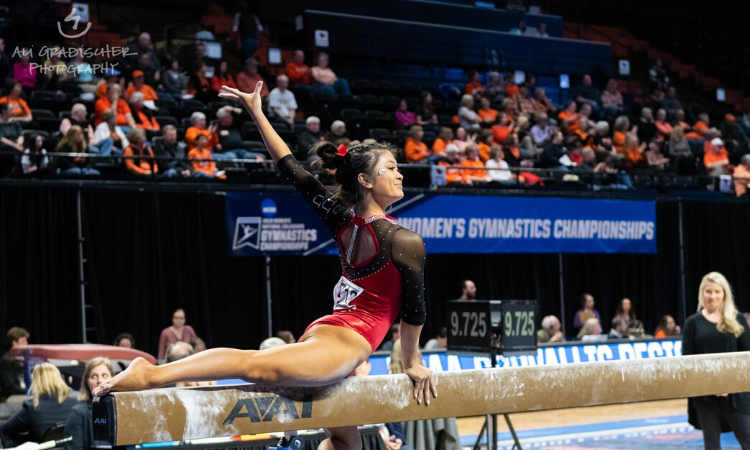 I hope you recovered from week one quickly, because here we are already with the first meet of week two on this fine Thursday afternoon.

Technically, Nebraska enters this meet unranked, since Road to Nationals “weeks” end on Sunday and its Monday loss to BYU isn’t factored into week one rankings. The Huskers put up a 195.600 in a close and exciting meet, showing a number of routines from freshmen and contributors on new events.

The most promising piece for the Huskers coming out of Provo was its ability to recover from mistakes. Last year, the team tended to have chain-reaction disaster routines after a fall. Also notable is that Nebraska vaulted four Yurchenko one and a halfs (Houchin, Curtis, Dujakovich, Verceles Carr) and all four were solid landings. The Huskers competed six a few times last year but could never put all of them to their feet.

We didn’t see Adnerys de Jesus compete; she was a regular contributor on vault, bars and floor in 2019. Kynsee Roby, who is returning from a foot injury, warmed up beam but didn’t compete. It’s possible that Heather Brink was strategically resting gymnasts since Monday/Thursday is such a tight turnaround, but we can’t know for sure. Neither de Jesus nor Roby was dressed out during the meet. I’ll also have my eye on Kaylee Quinn, who had a fall on each event in her all around debut. I don’t expect we’ll see her on all four again.

This is our first look at Southern Utah in 2020. The Thunderbirds finished 2019 ranked No. 26 and lost only two seniors. The team has reported that the McBride sisters are both healthy this year after injury-plagued 2019 seasons. We expect Shylen Murakami, Hannah Nipp and Karley McClain to continue to be standouts. Beam and floor were largely inconsistent last year, so it will be interesting to see if the 2020 squads on those pieces can start the year with hits. Since so many routines return, we’re not likely to see too many freshmen sets, but we expect Kaylee Kho, Ruby Hernandez and Kayla Horton to possibly break in.

Injury updates: Alyssa Ladieu (SUU) had hip surgery in the offseason but was released to practice in December. Adnerys de Jesus (unknown, UNL) and Kynsee Roby (foot, UNL) are both questionable. Abby Johnston (labrum, UNL) is likely out, and Sarah Hargrove (labrum/shoulder fracture, UNL) is out for the season.

Alright friends we’re about 20 minutes out, and so far it looks like Nebraska will be in a new leo! (Per its Instagram Story, new warmups.) Also, for those of you using Pluto TV on a Roku, I needed to click the “Activate” link on left of the channel guide and create a (free) login before I could change the channel. Once you do that, scroll…keep scrolling…scroll some more, and navigate to channel 455, which is where we’ll be. Hooray!

Warmups are LIVE! The camera is quite far away and blurry, but I’m fairly certain I saw de Jesus warming up beam.

Ah yep! De Jesus is back! At least on bars.

First up for our meet this afternoon:

We are currently getting a great shot of a man vacuuming the floor. I would want nothing else for my first 2020 blog.

Hey we’re going to start late! Naturally. Everyone is lined up to march in but it hasn’t happened yet.

We were literally waiting for the man to finish vacuuming. Here we go. Camera angles look like they’ll be trash so bear with me.

This arena has the biggest flag I’ve ever seen indoors. Which makes sense, I guess, at the America First Event Center. Anyway, anthem is now a 11 after the hour, so we’ve still got one touch to go.

Lineups brought to you by US Bank. I wish I were kidding.

Thaler (UNL): She appears to be going during a replay. Hop on the landing, seemed like a hit. 9.8, so indeed!

Smith (SUU): Yurchenko full on tuck off, wasn’t fully around with her hands on the rotation, hopped back. 9.85, career high!

Kho (SUU): Yfull, pike throughout, hop back. Not bad but the weakest vault so far. 9.75

Verceles Carr (UNL): Hit feet on ground after bail, we’re going out of order on events so we missed most of that. Calm down judges. 9.5

Houchin (UNL): Woof following two 9.5’s in a row. This is an important routine, and she sometimes falters under that pressure. Big early season test. Giant 1/1 to Tkatchev, gorgeous. Bail hand best one we’ve seen yet. Clean handstands. DLO, low chest and a small hop. Good recovery for the Huskers. 9.875, it was really just the dismount.

Piringer (UNL): Some pressure for the freshman to drop on of the 9.5s. Toe hand to Maloney, some loose knees, bail hand. Giant 1/1, late to double tuck, very low chest and a few steps forward. Some shy handstands in there. Rough but she held it together. 8.725, I think she put her hand down on the dismount.

That’s not quite the start the Huskers wanted, but it wasn’t catastrophic. Bars is the eternal question mark for this team, so getting through relatively unscathed will do. The Thunderbirds should be thrilled to score above 49 on their first rotation of the year. A good start.

Verceles Carr (UNL): Y1.5, great landing, she covered a small step with a salute. Not the biggest distance, but. 9.85, hit on amplitude I’d guess.

So far scores have felt reasonable. Bars was scored tighter than vault across the board, but nothing egregious. I’d say Murakami’s bar score could’ve gone a fair bit higher, but otherwise we’re pretty on track. Houchin’s vault was legitimately wonderful; I’m guessing the judge who went 9.95 took 0.05 for amplitude; it wasn’t the biggest distance, but it was a true, chest up, stick.

Cheerleaders are handing out free Pizza Hut pizzas. This meet has more sponsors than I can count.

Alright well while we wait. SUU has freshman Hernandez in the anchor spot, so watch that one closely. Jorgensen will need to get her head right after the bars fall to lead off well here.

Curtis (UNL): Double pike, bounces back and uncontrolled lunge. Front 1/1 + arched front lay but stuck. Low front leg in both of her leaps. This routine is weirdly lethargic, it’s the choreo not her performance though. Double tuck, better landing, slightly low chest. 9.875, feels a touch high to me.

de Jesus (UNL): HUGE double tuck, textbook landing. No deductions there. Her music has a lot of “uh” sounds and I’m not a fan. 3/2 + front lay step out, some knees in the lay. Switch side Popa with good rotation, maybe a touch below 180 on the popa. Double pike, lunges forward but it was controlled. What a first floor set of the year for her! 9.875, that one is more real.

Houchin (UNL): She had endurance issues on Monday. 5/2 gorgeous, drops the landing right in. Great rotation on it. Pretty splits. 3/2 + 1/1, foot slides a bit on the landing. This choreo really suits her. Double pike, overcooked it this time, two steps back and an OOB. 9.75

Hernandez (SUU): Freshman anchor you love to see it! Check on full turn, maybe .05. Bhs loso, soft knee in the loso and small check. Beat + double stag good in the air another small check. Front aerial drops her chest. Split. Losing those connections is iffier in this new code! Hopefully she has enough bonus. Side aerial 1/1, low chest hop forward, she went for the stick too hard. 9.525

Piringer (UNL): Double tuck, some foot slide on the landing, but great height. She has a double lay we’ll hopefully see this year. 3/2 + front lay, didn’t quite get her feet under her but covered it well. Switch side + popa with some cheated rotation. Double pike, good, lunged forward but controlled. Overall just small things. 9.9, I would’ve gone a touch lower, but it’s not outrageous.

That was a great outing for the Huskers. Some scores were a touch high, but nothing felt truly ridiculous, and let’s face it its NCAA floor. Houchin will need to figure out her last pass at some point, but she’s moving in the right direction.

SUU will also be happy. Some little wobbles and cleanliness things, but overall a strong rotation. Again I don’t like Murakami’s score, I’m not sure what these judges are seeing in her that I’m not.

Ah, once again no Roby.

Kho (SUU): Full-in, stepped forward but it was nice and open. Switch side + Popa was solid. Front lay front 1/1, knees on the full, leg sep on the lay. Double pike, slides back a touch on the landing, but good. 9.825, compared to UNL a bit low.

Thaler (UNL): Front aerial bhs bhs, knees in the aerial but the two bhs’s were lovely.  Switch + back tuck solid, some back knee bend. RO 3/2, land and covers a step with the salute. 9.825

Ma. McBride (SUU): Double pike, sky high good landing. Front lay + front 1/1, some leg sep in the lay and a little wild on the landing. Tour jete 1/2 + split 1/1, really pretty. Double tuck, deep knees but good amplitude. Well. That has to at least go 9.9 after the McClain score. And it is indeed a 9.9!

The Huskers will be thrilled with that total. There was some generous scoring, but nothing was extremely out of line. Southern Utah will also take that debut; this floor squad is very strong. Overall, a great early season meet both teams will want to use for momentum moving through January. Nebraska will especially like this 196-plus away score as insurance against its eventual NQS.