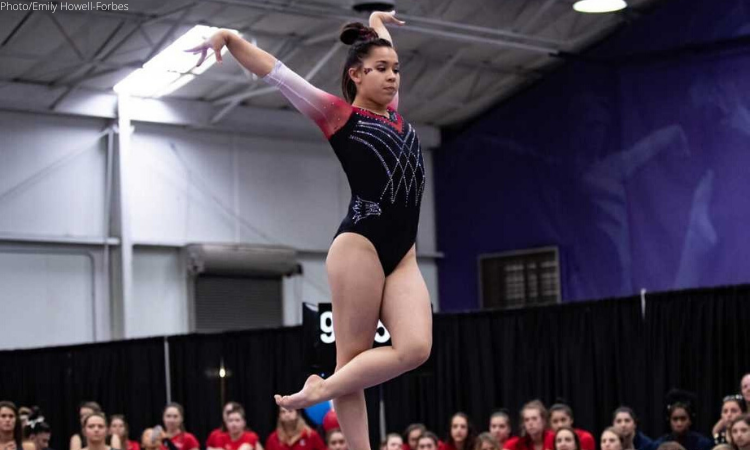 Only two USAG teams competed this weekend, but that doesn’t mean there wasn’t drama. SEMO had a breakthrough meet while Bridgeport joined the three Division I teams at the Critique Classic in more or less having a breakdown. At this point, we know very little about the outlook for the rest of the USAG season, but it was great to see some strong freshman debuts and injury returns this weekend.

What competition rust?!? @LindseyBatess nailed a career-best bars routine of 9.775 for fourth on the event in her first meet back from injury in exactly a year!!!#weBAC | #LetsSoar pic.twitter.com/nwNOw3wsz5

SEMO went through a grand scale injury crisis in 2019, and while its freshmen stole the show this weekend, it was great to see several SEMO athletes return from injury and shine. Junior Bates scored a career high on bars after missing last season and helped her team to its best bars score in almost two years.

The Big Storyline: Suffice to say this was not the meet Bridgeport wanted—the Purple Knights had not scored below 190 since 2014. Even worse, sophomore powerhouse Crystal Gwinn may have suffered an injury warming up floor. On the bright side, freshman Hannah Barry hit her first college beam routine under pressure, showing a lot of promise, and junior Gabrielle Kistner added bars and made her NCAA all around debut.

Implications: Don’t freak out over this performance—Bridgeport is capable of a great deal this year, and thus far all evidence points toward this score being a fluke.

Controversies: This meet was a mess on all sides, with numerous injuries and disaster routines from usually reliable competitors. There was also no stream and minimal live scoring, and while several teams (including UB) broadcast their own routines on social media, the venue’s WiFi was poor and the resulting video coverage was difficult to follow.

The Big Storyline: This meet was a big, big deal for SEMO. The Redhawks beat their 2019 season high by over a point and debuted 14 freshman routines. Newcomer Dahlia Solorzano-Caruso shows every sign of being a phenom to match Anna Kaziska. Even more excitingly, they had a great day on bars, the event that caused them the greatest torment in 2019. Besides beating last year’s bars season high by close to two points, they beat Missouri on that event. There were several notable absences for SEMO, like Mackenzie Slee and transfer Ashley Albrecht.

Implications: SEMO passing Bridgeport’s score this week means it debuts at a provisional No. 1 in the USAG rankings. While there’s little chance that will hold next week, this does look like a team that will be fighting for a team spot at USAG nationals in the spring.

Records: SEMO beat its 2019 season highs on bars, floor and the team total.

READ THIS NEXT: Technique Point: Breaking Down the Yurchenko 1.5