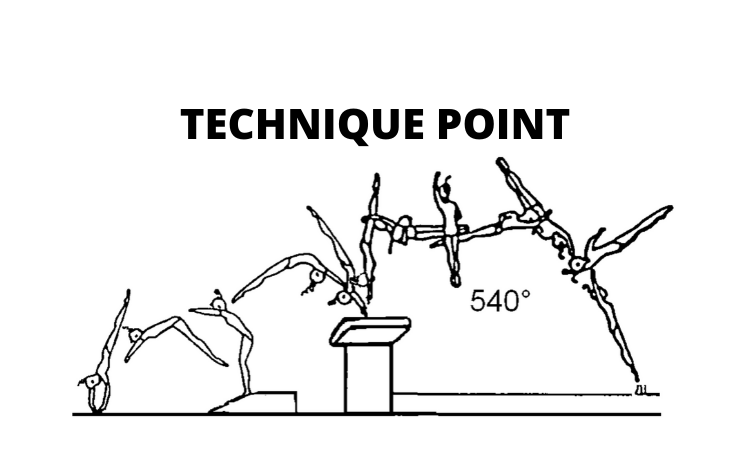 The 2020 NCAA season is now underway, which means it’s time to look at a skill fans will see many times throughout the year: the Yurchenko 1.5.

This difficult vault starts at a 10.0, which means many gymnasts will be incentivized to compete it. However, it takes a strong combination of power and technique to perform this vault with mastery, and only some will be successful.

Kyla Ross had an incredible 2019 season on vault, notching four perfect 10s on her clean and dynamic Yurchenko 1.5. Here’s a clip of her performing the impressive vault at last year’s national championship semifinal for a 9.950.

What makes it so good? Let’s break it down.

Entry: After a powerful run, Ross leaps into a quick hurdle, which propels the energy she’s built up into useable energy for the vault. She keeps her head tucked between her arms, so it’s not sticking out and breaking her body line in any way. 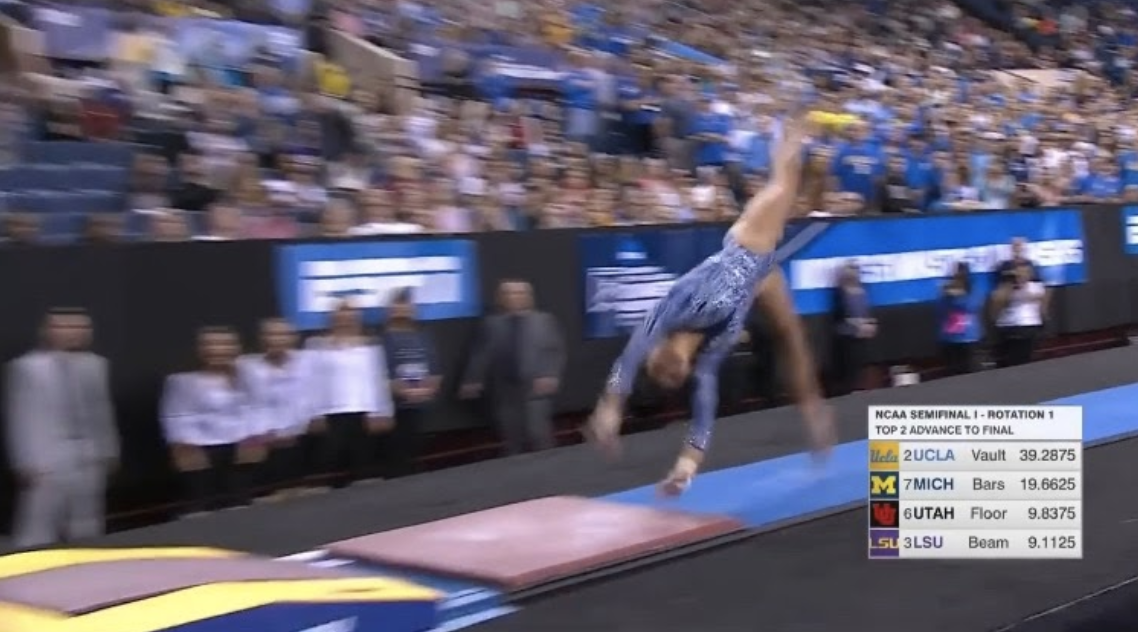 Ross does a great job of keeping her arms tight on the roundoff, blocking out of her shoulders into the snap down. She lands on the sweet spot of the board, which allows her to maximize its spring. 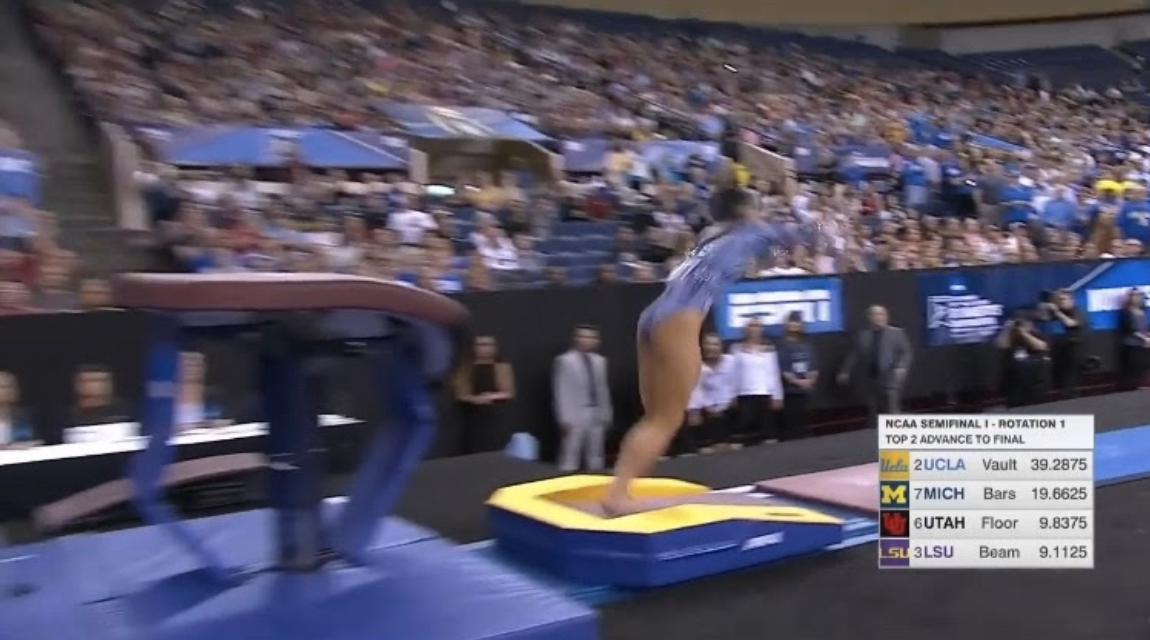 Table: In reaching back for the table, Ross does throw her head back a little, causing her shoulder angle to break ever so slightly (shoulder angle: the angle your shoulders make with the rest of your body). However, it’s not enough to reduce her block in any real way, as she is still able to propel herself several feet in the air after hitting the table. Ross does have some slight leg separation, which may be caused by this small break, but she fixes it before it becomes a problem (breaks like separated legs or bent hips can reduce a block). 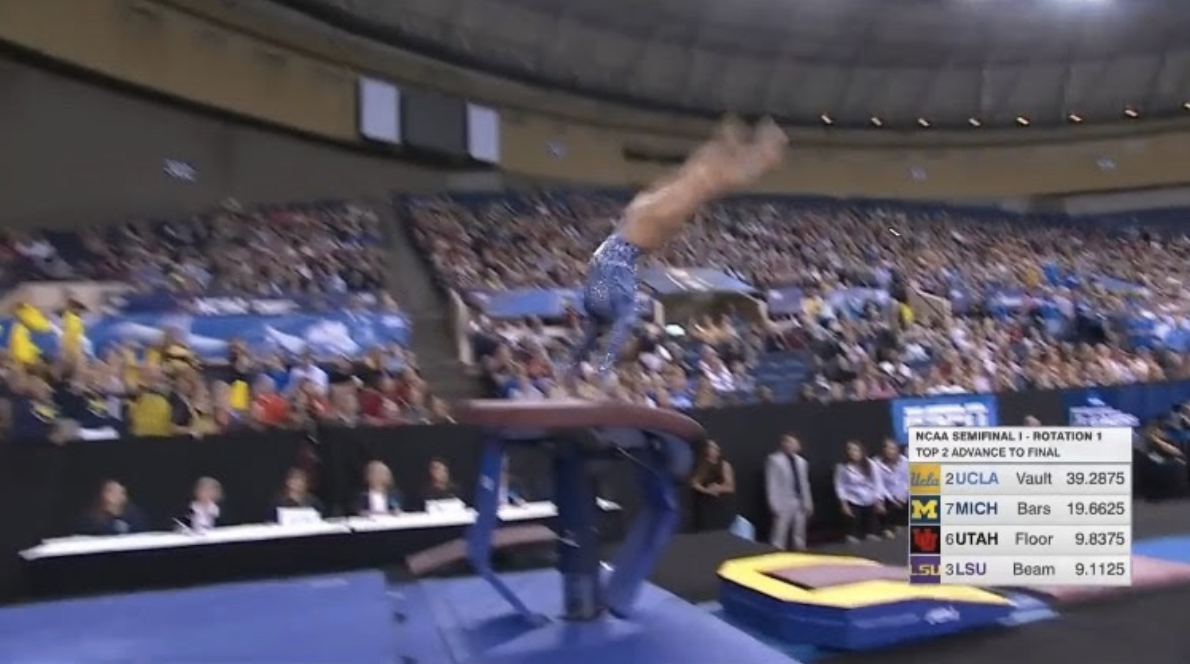 Airtime: At her maximum height, Ross’s entire body is close to two feet above the table. She is tight, her legs are glued together and her arms stay close to her body in her twist—all of which help her increase the vault’s airtime. 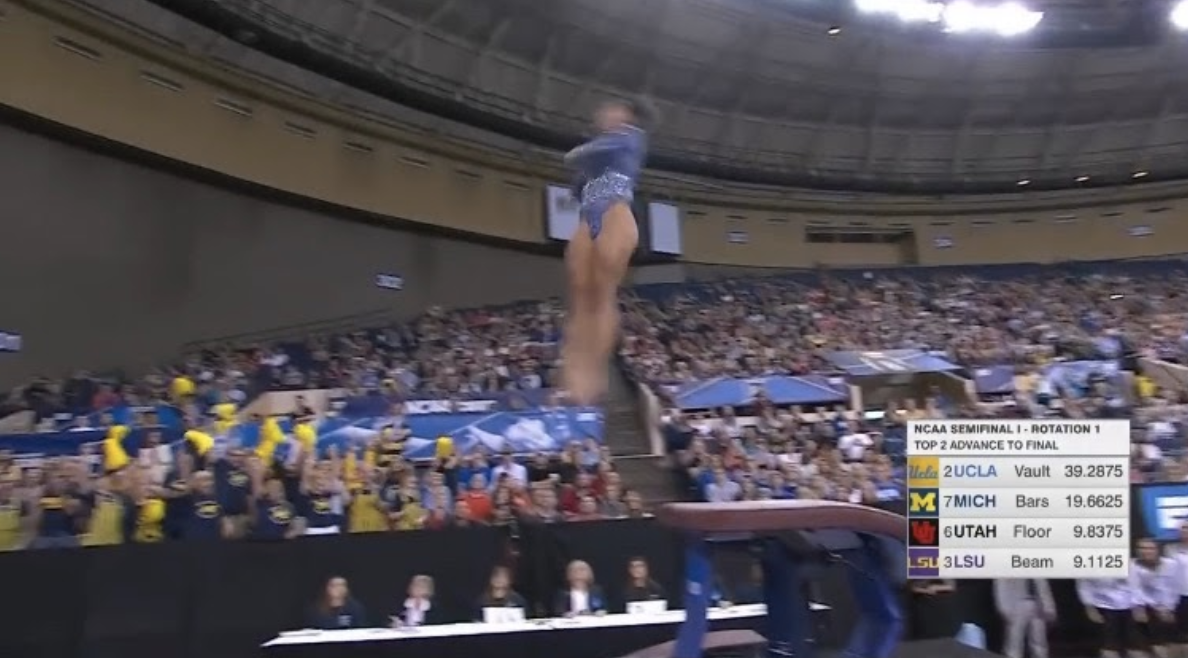 Landing: It’s obvious that Ross has perfect air awareness by the way she lands. After 1.25 twists, she starts to unwind her arms from her body, which stops her twist just in time for the 1.5’s blind landing. 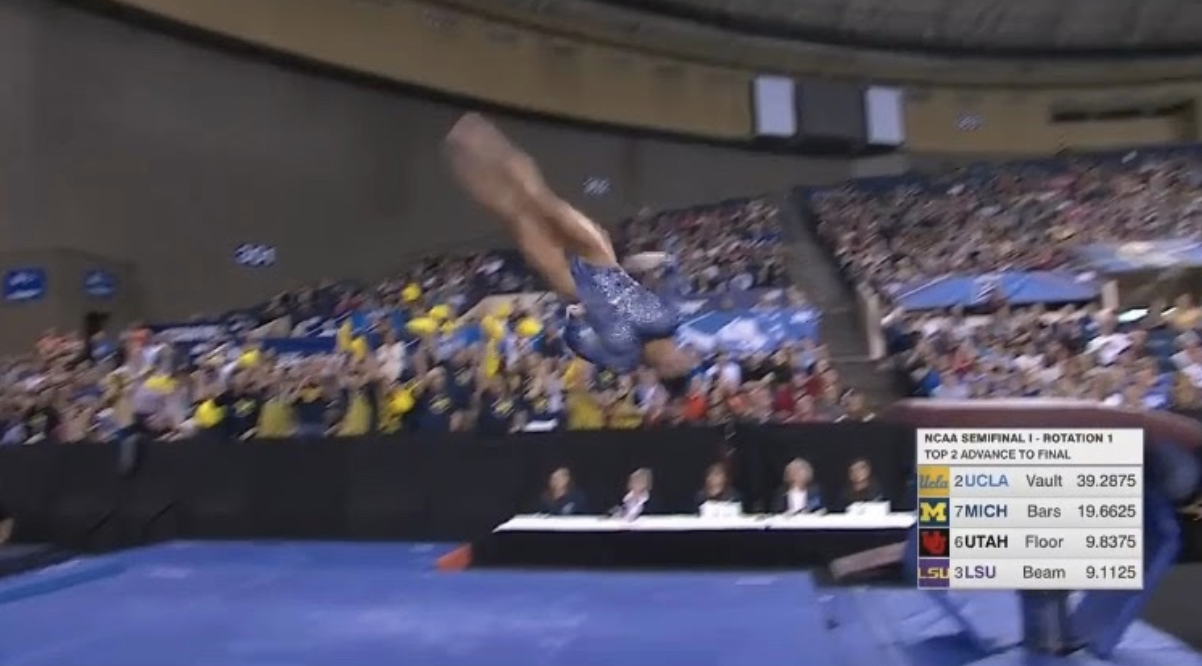 She lands with her chest up and her legs slightly bent while spotting the ground at a 45-degree angle. 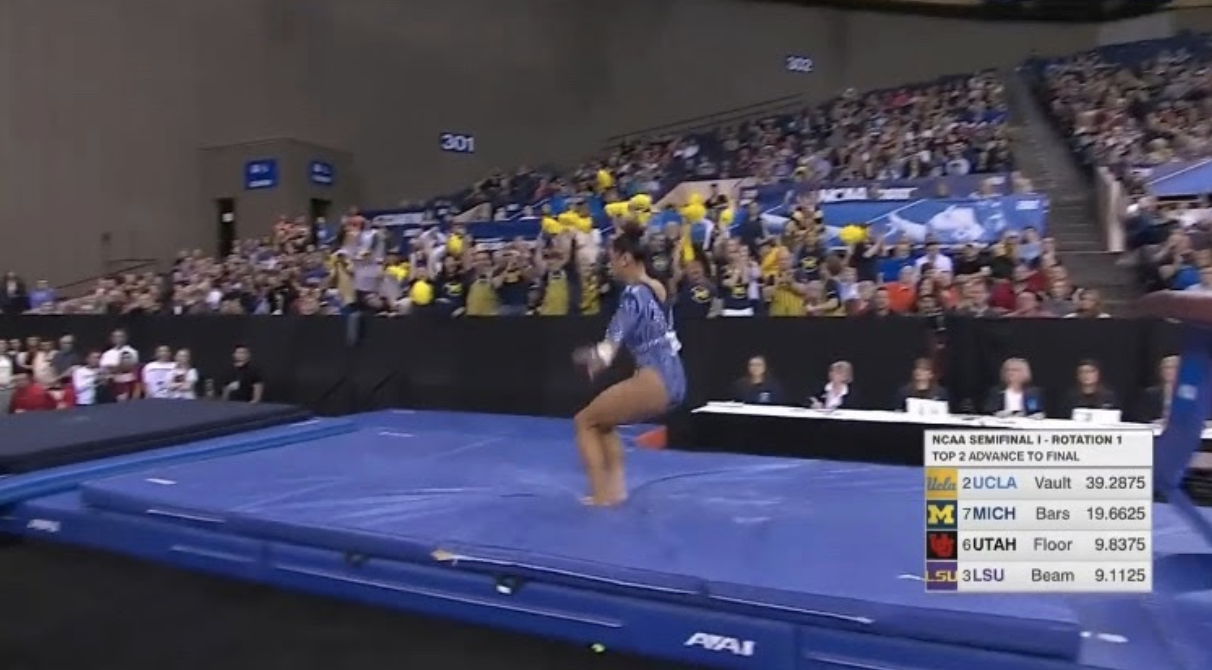 Stick: The stick is a product of a successful vault. If everything is done right on the table and in the air, it comes naturally. Ross has set herself up for a perfect finish. 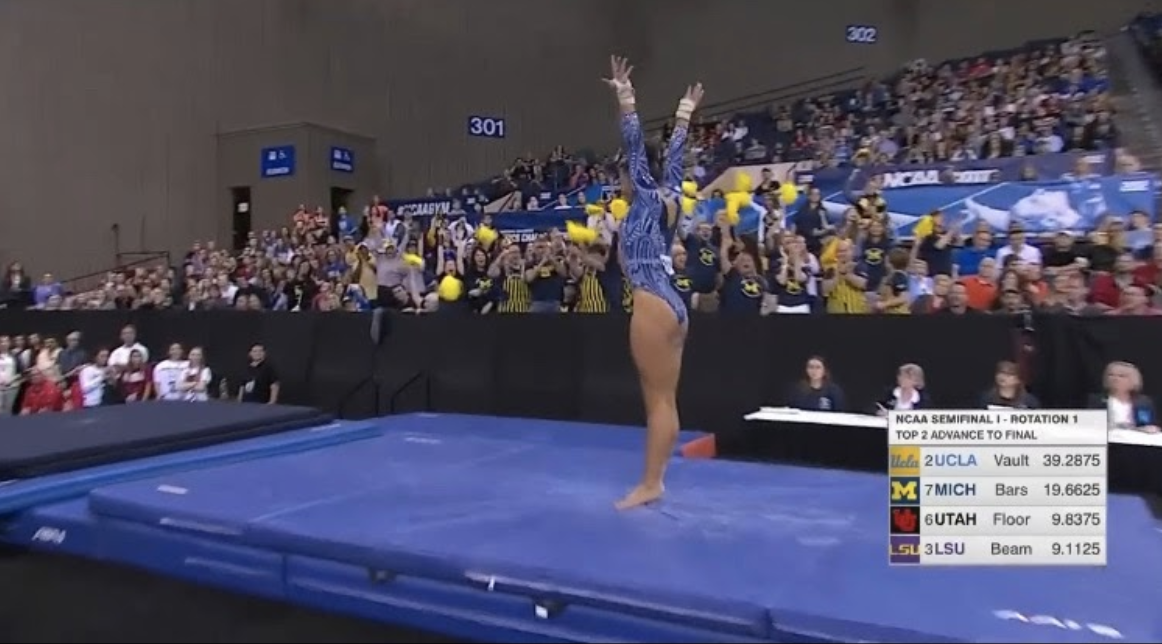 Now let’s take a look at one of the few times Ross was unsuccessful with this vault last season.

What caused Ross to fall backward at the end? Let’s break it down.

Entry: Ross’s entry here is very similar to her entry on the more successful vault. She has a powerful run and a quick hurdle and maintains a tight body throughout her roundoff. The only small difference is that Ross doesn’t stretch out quite as far on the mat for her roundoff, which results in her having a less neutral head placement on the skill and being a tad short on the board. However, this is within a very normal degree of variance and shouldn’t really have much effect on her vault. 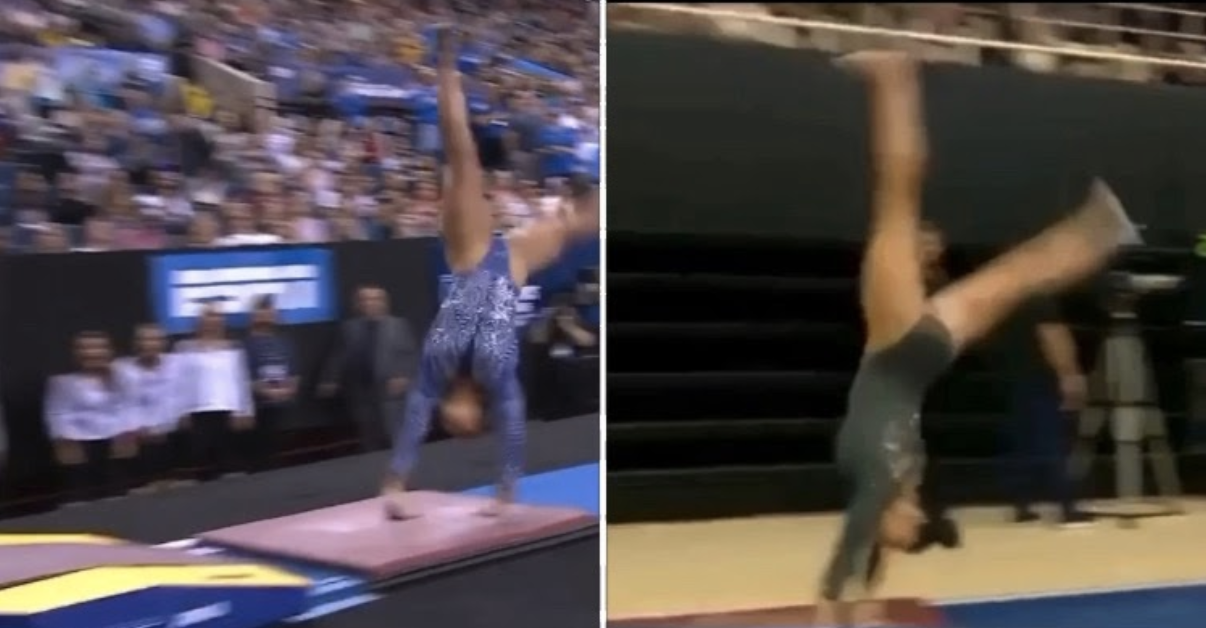 Table: Her table positioning is also very similar. Ross once again throws her head back on this part of the vault and separates her legs, but otherwise maintains a tight body shape and gets ample block to land the vault. It’s still looking good! 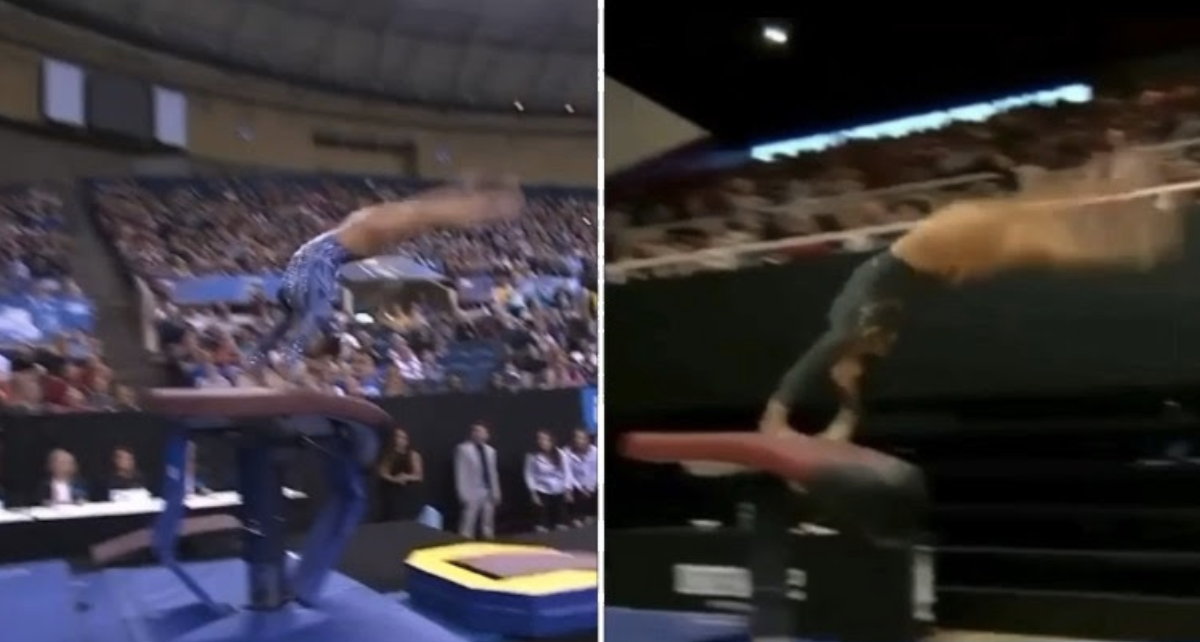 Airtime: Ross does a great job of blocking first and twisting later, which allows her to maximize her lift. 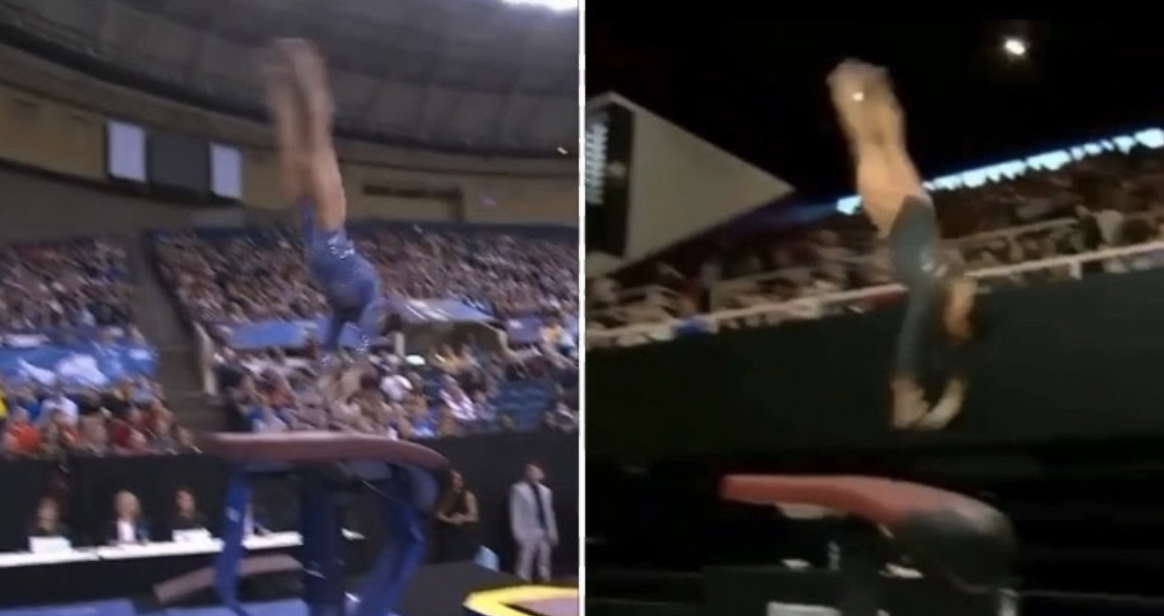 Both vaults reach a similar maximum height. Ross is well over a foot above the table on both attempts.

Landing: This is where things go wrong. In an effort to stick the vault, Ross anticipates the landing and tries to exert more control over it than she should. She begins to open at the 1.25 again, but this time Ross lifts her arms above her head instead of to a more neutral position, stopping her rotation more forcefully than needed. 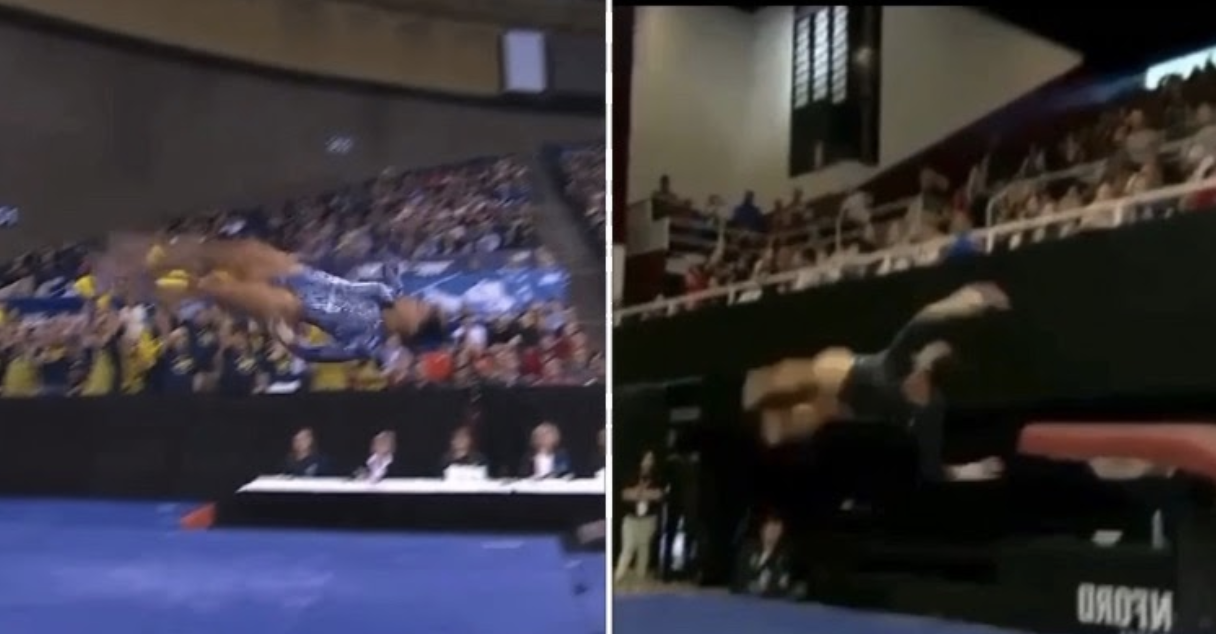 Think of a skydiver falling out of a plane. At first, the diver speeds toward Earth, but then the parachute opens, creating more surface area to slow things down. The concept is similar with this vault, where Ross creates more surface area by lifting her arms above her head. However, it proves to be more than enough, and her arm placement stops her rotation too much too quickly. By contrast, the more successful vault is the one where she keeps her arms by her body, allowing for a much more natural landing—one that works with the vault, not against it.

Stick: Ross’s arm placement pulls her shoulders and body back on the landing, and she is forced to take several steps backward. (By contrast, If her arms were in front, they would help pull the vault forward and upward). 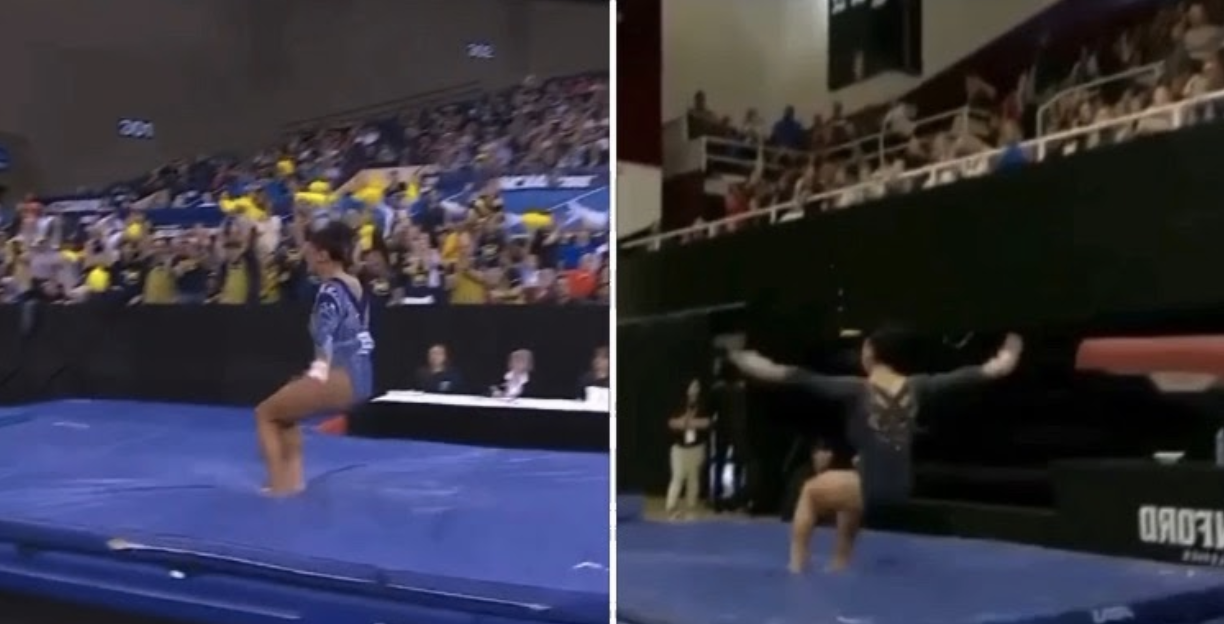 If Ross didn’t overestimate the landing, I guarantee the vault would have been beautiful. “Going for the stick” can be very dangerous for blind landings—just ask countless other gymnasts.

Tar Heels senior Khazia Hislop has a gorgeous Yurchenko full that is begging to be upgraded. Her technique is absolutely superb, and she could easily add another half twist to it.

At her maximum height, Hislop (left) is around two feet above the table—reaching the same height as Ross (if not a smidge more!). She also has near-perfect form in the air and a gorgeous toe point.

Hislop and Ross are in the exact same position when they complete the full twist, meaning Hislop could easily add another half like Ross does. She’s a bit more piked than her Bruin counterpart, which is just a slight body shape issue that can be fixed.

Let’s hope Hislop and her coach make the decision to go for the Yurchenko 1.5 this season. It would be lovely!

READ THIS NEXT: Introducing Technique Point