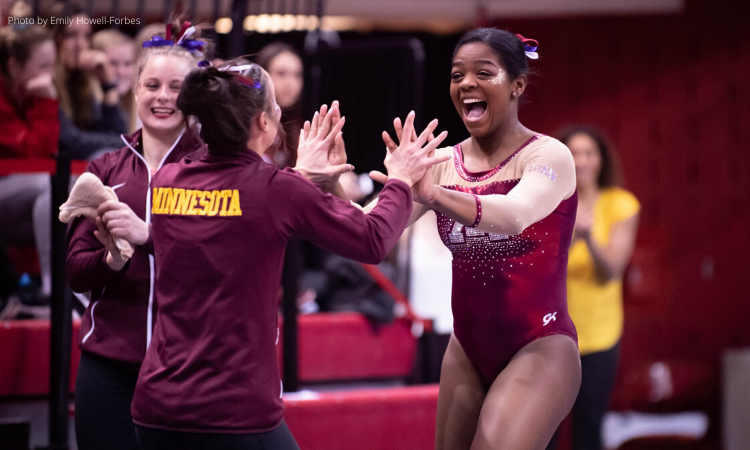 Hello and welcome to the final Minnesota Intrasquad before its season officially kicks off next week! I am here reporting LIVE from Maturi Pavilion, and I am just as anxious to see the Gophers in action as you all are. The team is coming off a fantastic 2019 season, where they finished 13th overall and junior Lexy Ramler finished as the runner-up in both the all-around and on the uneven bars at the NCAA championships. Fun fact: those finishes were the best individual finishes of any Gopher gymnast since 1990.

Minnesota is returning all but one routine from last year and will be adding some potentially stellar routines from Denver-transfer Maddie Quarles and incoming freshmen Halle Remlinger, Maya Albertin and more.

In addition to seeing how competition ready the Gophers are and who might be making lineups, tonight I’m hoping to learn a little more about the following:

The meet is slated to begin at 6:30 p.m. CST and will be streamed on BTN+. I don’t think there’s going to be live scores for this thing, but if that changes, I’ll link that too.

The very first thing I saw when I got here was Paige Williams warming up vault, so I think it should be safe to say we can let go of any injury concerns.

Tiarre Sales will be making her all around debut tonight, as will freshman Halle Remlinger.

Looks like the Gophers will be competing one event at a time tonight. I’ll update scores as I am able to!

Introductions are underway. Sophomore Andrea Stancik is in a boot. Good crowd in the Pav tonight!

Unrelated to anything gym related, but Mary Korlin-Downs has some fantastic multicolored light-up gloves on.

I don’t have a great view of the scores so I’ll update those as I can. They should update on the jumbo screens eventually.

Remlinger (Maroon): FTY, little hop. Looked to be back from my angle but replay made it look more in place. 9.650

Williams (Maroon): HUGE FTY, but takes multiple steps out of it. 9.675

The only scores I was able to see were Sales and Sonier. If I get clarification on the others I will update. NOTE: looks like they are counting four scores from each lineup, not five, so don’t let the lower totals concern you!

UPDATE: I’ll be given a score sheet shortly.

Remlinger (Maroon): toe on tkatchev, some flexed feet but otherwise nice, bail to handstand, double tuck dismount. I’ve seen her do a FTDT in training so we’ll see if that is upgraded eventually. 9.375.

Betts (Gold): toe on tkatchev, bail to handstand, blind change to double tuck dismount. Looks like she may not have started out of a 10.0. 9.450

Willmarth (Maroon): toe on tkachev, nice. bail to handstand. big double tuck dismount, she landed about five feet away from the bars. 9.675

Sales (Maroon): GORGEOUS handstand, bail to handstand nice, goes over the high bar and comes off. blind change to markelov, very nice. DLO dismount stuck.  Minus the hiccup that was a beautiful routine. 9.225

Ramler (Gold): perfect handstand to start, maloney to pak beautiful as always. Van leeuwen, ALMOST loses the handstand back up on the high bar but manages to hold it, full twisting double back dismount. Not her best but still a gorgeous routine. Because Ramler. 9.825

Looks like Loper might be sitting out the rest of the meet. I hope this is just precautionary.

Ramler (Gold): BHS LOSO, not so much as a wobble. front aerial to wolf jump, nice. Even Ramler’s arm choreogrpahy is pretty. Yang bo, beautiful and solid. Aerial back full dismount STUCK. That was absolutely beautiful. 9.875

We have 9 gymnasts going up on floor, not including Loper. Tiarre Sales is making her official floor debut tonight! I’m excited.

LeNeave (Gold): Front 1.5 to start. A little shy of 180 on her leap series. Front 1.5 + front layout for the second pass.  Spotted double tuck to end, chest looked a little low on the landing but it was hard to tell from this angle. 9.450.

Cronin (Maroon): ooh, I love this music. RO double pike to start, big step back but looks like she stayed in bounds. Front layout + front layout for the second pass… thinking she might have been going for something else there. Final pass double tuck, spotted, very controlled landing. 9.300.

Sales (Gold): So much fun energy in this routine. TO BHS double pike to start, slight bounce forward. You can tell how much fun she is having with this choreo, which makes it very fun to watch. Second pass front 1.5, slightly uncontrolled landing but still nice. Came up short on her last pass and sat it down. Obviously some things to work on there but that has the makings of a line-up worthy routine for sure. 8.650

Remlinger (Maroon): this music feels very Oklahoma. Oh hey there, a piked FULL IN to start. Looks like she’s having fun. RO + 1.5 front layout, huge. Double back to finish, slight bounce forward but you can tell how much power she has. That is definitely a routine the Gophers will be using this season! 9.575

Williams (Maroon): huge double full to start, it’s great to see her on the floor after all the speculation that she may be injured. Sky high leaps. second pass was beautiful as well. finishes with a front 1.5. All in all looks good. 9.825