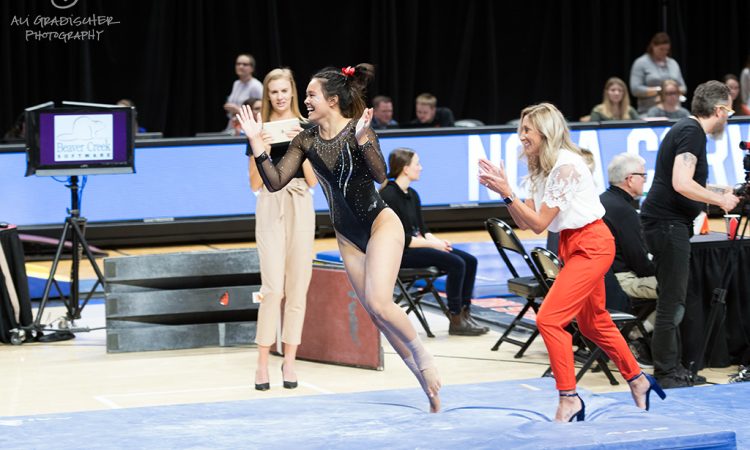 Both teams boast big freshman classes, but it’s unclear how much we’ll see of them tonight. For LSU, only Kiya Johnson played a big role at the Gymnastics 101 event; she competed the all around while just two of her other classmates made appearances on one event each. We’ll see if they make bigger contributions with a month more preparation under their belts.

There’s been even less noise from Arizona, though the potential for its freshman class is huge. I’m particularly looking forward to the debuts of 10.0 start value vaults from Malia Hargrove and Danielle Nosek. Also, I’m holding out for a big bars score for senior Christina Berg. She’s gone 9.975 on the event before, and if there’s any arena for that kind of magic to be replicated, it’s here.

Speaking of scores, you can follow along with those here, along with the video stream on SECN+. Don’t know how to get SECN+? We have you covered.

Was there every any doubt?

Rivers will lead off. Saw her warming up her 1.5 with mixed landing results, so I’ll be interested to see what she does here.

Rivers (LSU): Went for the full. Flaired it out and a nice landing with just a small step. Why go for the harder vault this early, I suppose. 9.775.

Hendrickson (Arizona): Blind half into the Jaeger, hesitation on the handstand. Almost came apart but made the connection. Not so for the bail, though…missed it and fell. Gets back on for a strong DLO and a stepp back. 8.700.

Leydin (Arizona): Beautiful Maloney to Pak with some legs. Short on the handstand into the Markelov, nice unique skill. Double front a little short. I’ve never seen that routine in full…underrated! 9.650.

Brovedani (Arizona): Piked Jaeger. Arizona bringing it with the Paks tonight. Love her lines. DLO with a hop forward and chest pretty low, everything else was nice though. 9.750.

Berg (Arizona): Handstands, all the handstands. Jaeger to bail, not much to deduct. Stuck full-in with her chest just a little bit forward. 9.900. Back in Tuscon, it’d be higher.

Arizona recovered well from the first error. If we’re prognosticating based on thoughts from Gym 101, LSU looked better on vault than we expected, and will continue to be once Rivers gets her 1.5 or double. Nibbs’s full isn’t the most ideal, but it could do earlier in the lineup if other options don’t arise.

Waiting on the LSU lineup. DD is giving Kai the “KJ beam shoulders pep talk,” so assuming she’ll lead off?

Schennikova (LSU): First of all…Schennikova! Needs to cast again, looks like she’ll make it into the Maloney but then goes for the Pak and slips her hand. Oops. 8.875.

Rivers (LSU): Wow…landed her bail with super bent legs but wasn’t fazed at all. No hesitation. Maloney was good, Tkatchev could have been bigger. DLO stuck but pretty close to the bar. There’s the crown. 9.500.

Durante (LSU): No longer leading off after two seasons, but I can see her going further back. Floaty Jaeger into a short handstand. Big full-in with a hop.

Hargrove (Arizona): Best vault by far from the Cats, lots of power on her full.

Harrold (LSU): Zuchold, nice as usual. Some odd legs on the Jaeger but hits it. Stuck double back. She’s here to play. 9.875.

Schennikova showed a fight on bars, but it wasn’t enough just yet. But it’s nice she’s even here after the Gym 101 absence. LSU won’t like to have to count the 9.500. But, people…it’s week 1. Consider this your reminder.

Plus, a group of good fulls from Arizona. They’re looking very collected this evening.

We’re being told how to book “The Landing” event space in the PMAC for prime viewing of gymnastics. This school’s marketing teams are something special.

Desiderio (LSU): Tiny, tiny hesitation on BHS LOSO. Switch to switch half to beat, another slight hesitation but good. Much bigger hesitation on the aerial, has to check. Sticks the back full to dismount, some nerves but a decent start. 9.775.

Dean (LSU): Side aerial to BHS, bent legs on the BHS but stuck. Missed the connection with her jumps so she repeats the split jump, good. Wobbles on the sissone. Another stuck back full. 9.600.

Durante (LSU): Oof, looked really good on her BHS LOSO but she comes off. Nice position on the straddle jump, stuck dismount. 9.350.

Going have to look up whatever Dan + Shay song this is if one of my dutiful commenters doesn’t know. 🙂

Edney (LSU): Nervier than usual for her, hits the BHS LOSO. Big height on the front toss and sticks the 1.5 dismount. 9.900.

Johnson (LSU): “I don’t think there’s any question that this is an impact freshman for LSU” immediately before she falls on a punch front tuck. Super strong up to that point, though. Beautiful aerial. Stuck back 1.5. Well, at least there’s no struggles on the stuck landing front. 9.350.

Berg (Arizona): Front double full, some legs in the air but a good landing. Back 1.5 to front pike, much better form. Rudi to split jump to end. I’m very partial to routines of all twisting passes. 9.800.

Campbell (LSU): Missed the first half. Switch leap to switch half. Yet another stick on the landing. 9.925.

Leydin (Arizona): More fun music. Double tuck, very nice. Switch full to straddle full, perfect positions. Music turned into something I’ve heard before so I like it less. Not the best position on the double pike but a nice landing. Good. 9.875.

Horton (Arizona): Exhibition routine. Accidentally repeated a Rudi, which would’ve created a start value crisis if the score had counted.

So…yeah, this thing is close. On paper, Arizona could take it, but the beam minefield lays ahead. Lays? Lies? Whatever happens, at least they have a fun floor rotation to their name.

Poised to be junior Gunter’s first competitive routine for the Tigers.

Harrold (LSU): Front double full with a step forward. Double pike is huge. This is a quietly confident routine, I like the slower pace from previous seasons. Nice leaps. Back 1.5 to front lay, big smile at the end. 9.850.

Davis (Arizona): Super cool front roll mount. BHS LOSO LOSO to lead off is a flex. No pauses here, love. Back 1.5 with the tiniest of shuffles. Nice way to set the tone for a key rotation. Waiting on her score for some reason. 9.850 at last.

Gunter (LSU): Double arabian, steps out of bounds but what a power move to open your LSU career with an E tumbling pass. 9.625.

Stauffacher (Arizona): BHS LOSO, slight hesitation. Missed the mount but the commentators seemed to love it. Straddle half, perfect. Aerial to split jump, good connection there. Cartwheel to back full dismount, good split. 9.800.

Leung (Arizona): Already hired to work at Nike next year? Secure the bag, sis… Good control on the landing, almost a stick. 9.850…making up for that 9.500…

Campbell (LSU): Front double full, some hesitation. Biggest 1.5 to front lay. I like this choreo in the middle, the drums must be deafening in the PMAC. Really good position on the switch full to straddle. Nice last pass.

Hargrove (Arizona): BHS LOSO, confident and no issues. Cat leap to side aerial and can’t stay on despite windmill arms. Woof. Lovely back 1.5 stuck to end. 9.225.

Edney (LSU): Double arabian, again not her best, lands pretty deep. Back 1.5 to front lay. Good dance. Big double tuck but again lands it deep. Not the best night by her standards, but she has plenty of time.

Hendrickson (Arizona): BHS LOSO, legs in the air and she hesitates, very close but she stays on. Fab save. Cat leap to side aerial, another tiny check, but good. Back swingdown, first of the night. 9.725.

LSU definitely got some gifts tonight, even if it wasn’t the night they’d have wanted otherwise. Arizona should be really proud of itself even with the falls; take that performance minus those elements and you’re on your way.