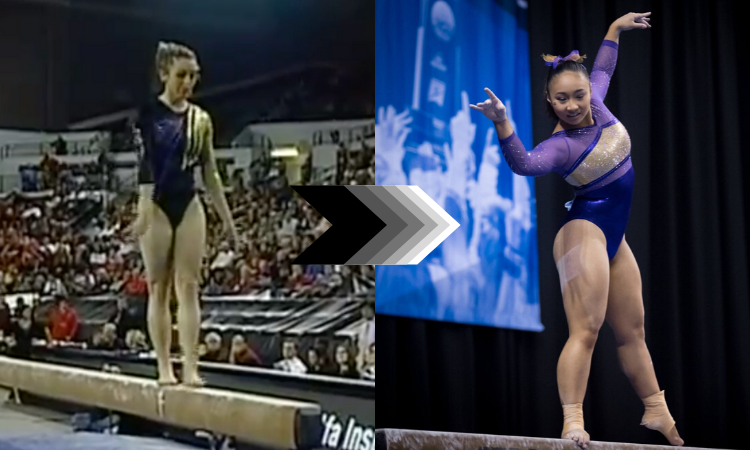 In college gymnastics, especially in the latter part of the decade, a perfect 10 might not necessarily mean the routine was perfect. However, we wanted to highlight our favorite perfect routines from the last 10 years, routines that were the best of the best, routines that have sentimental value to the individual or program or routines that are iconic in their own right.

Don’t agree with the 10s we chose? Think we left some pivotal performances off the list? Let us know your favorite perfect 10s from the decade in the comments or on social media!

McMurtry was known throughout her career for her impeccable form on her vaults, which even stood up to the slo mo test. This double-twisting Yurchenko is one of the most perfect she did in her four years as a Gator, and, even more impressively, she scored it on the road at LSU.

McGee absolutely stole the show at the 2016 national championships when she won the floor title in the last routine up and with all eyes on her. And while she didn’t score a 10 for that routine, she did reach perfection a number of other times in her career on the event. This routine in particular illustrates how thrilling she was to watch.

Hall’s routines were always absolutely iconic, resulting in her having arguably the first viral college floor routine which this performance spread like wildfire in 2014. But our favorite part is not only the crowd reaction to her skills but the way her team mobs her at the end as well. Also of note: This viral routine is one of the only ones we can think of that got a 10, with other gymnasts’ routines becoming “famous” for performances that weren’t their best.

Lee might have had more pristine routines in her storied career, but this perfect mark means the most in terms of implications and emotions tied to the score. It was the last routine of the last rotation of the 2018 Super Six when the sixth-year went up and annihilated this performance to win UCLA the national championship. We get a little teary just thinking about it.

Baker was known for her stellar Dos Santos to open her routine, but Florida’s floor anchor also earned a number of perfect marks for her crowd-favorite performances over her four years. This routine, her last full number of her career, illustrates her prowess on the event.

Zamarripa was an impeccable queen in all aspects of gymnastics, but her vaults were a step above. The flare, the form, the landing—it’s the definition of perfection. There’s not much more to say.

We love when judges reward a performance for the performance itself and don’t take into account external, unwritten factors like not liking that it ends with a giant full to double back or not including a single bar release. We especially appreciate Bridgens’ perfect routine because she gave the judges no room for ambiguity, with every handstand nailed and every skill on point.

Watching perfection Stacie Webb of @suugymnastics with a perfect 10.000 on the beam. #SUU #BYU pic.twitter.com/p3I8Sup9sf

Webb’s beam 10 was extra special, marking the Thunderbirds’ first of its kind in program history. Plus, fun fact, head coach Scotty Bauman actually missed seeing this routine because he was waiting in line for the bathroom.

We all know Ross is a perfect human being to begin with, which made choosing her most perfect perfect 10 a near-impossible task. With 10s on each of the four events, we had a lot of options to sort through but finally decided on this beam performance that we think is essentially flawless.

It became almost a theme of Price’s career that she was “robbed” of perfect 10s more often than she received them, but here, in the last competition of her career, scoring a 10 made up for all the previous missed chances. Plus, not only did Price perform this perfectly, it was difficult and unique to boot, making her one of our favorite gymnasts to have competed in the NCAA this decade.

Taylor experienced some of the biggest highs and lowest lows in her career at Georgia. And while 2010 was a rough year for the Gymdogs to close, Taylor was a bright spot with this perfect 10 on beam, which is just so fluid and solid and confident you can’t help but appreciate it.

You hear talk of gymnasts drilling landings, but we don’t think that’s ever been more true than with this vault from Milliner. It’s absolutely spot on with the landing, and she doesn’t have to fight at all to stick. Absolute perfection.

Sloan was often critiqued during the end of her career for some of her perfect 10 routines not necessarily being technically perfect. However, we think this routine leaves little doubt, as she nails every landing and skill from mount to dismount.

Did you think we’d feature Dabritz on an event other than bars for this with her nickname? While maybe not the most 10-iest 10 on this list, Dabritz was a consistency queen, scoring near perfect marks time and time again. This one in particular came at a clutch moment during the national championships.

Like many others on this list, Nichols has had a lot of perfect 10s, some questionable, some not. But this routine from nationals in 2018 is one of her best and most perfect 10s—she even lands her dismount with her feet completely together!

Like Milliner’s vault, Dowell absolutely nails this landing, and with flawless form in the air, the judges had to give her the 10. Sometimes Oklahoma gets the benefit of the doubt with its scores, but there’s no question for this vault.

The most impressive part about this 10 is probably the fact that it was scored away at Georgia. In fact, when the score flashed, the crowd didn’t even react, making it take a couple moments to sink in that Hopfner-Hibbs actually did reach perfection to rival Taylor’s earlier in the meet (see above).

We’re giving that last handstand the benefit of the doubt and choosing to believe the camera was at a bad angle, but since Finnegan deserved many more 10s in her career than she actually earned, we knew we had to include her on this list somehow. Her form is true perfection, and all her skills are so precise.

What makes this vault special is the fact that is was one of only two, just two, perfect 10s on any event in 2011, with each coming from Big Ten gymnasts. We’re just as shocked as you are. Back in the day when Yurchenko fulls could reach perfection, Botterman was an expert in sticking the landing.