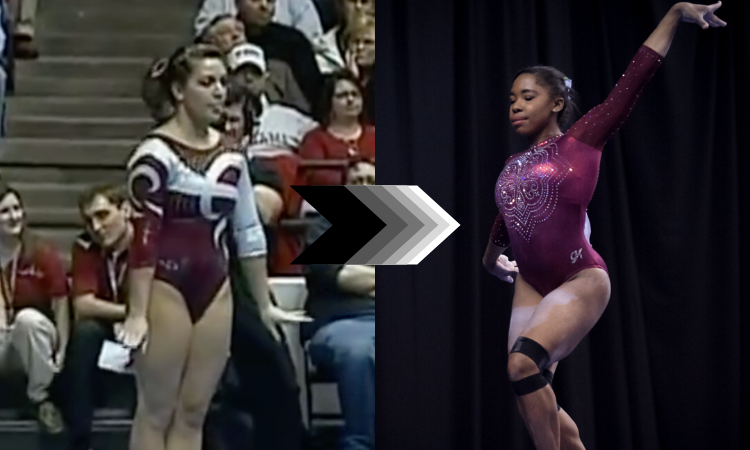 This decade saw a lot of shocking moments, from dominant teams taking a downward turn to up and comers surprising fans with success. And while the most recent years are still top of mind, we took a look at the biggest surprises over the whole decade.

Don’t agree with our ranking? Think we left some shocking moments off the list? Let us know your top surprises of the decade in the comments or on social media!

10. UIC having its best season ever in its final year: UIC announcing it would be cutting its men’s and women’s gymnastics programs a shock to the system, and it would have been reasonable to expect a mediocre last season. But the Flames went off with a bang, tying for the conference championship and finishing in second at USAG nationals.

9. Stanford’s slow downward turn: Early on in the decade fans of Stanford knew not to be too concerned by a slow start from the Cardinal because it always seemed to turn things around when it counted come postseason. But starting in 2017, Stanford started slow and ended that way and hasn’t been the same team since.

7. Lindenwood qualifies to regionals: Doing something only two other DII programs had done before it, Lindenwood, only a team since 2013, qualified to compete at regionals for the first time in 2019. And although it didn’t advance past the first round, it showed it has the potential to ensure its inclusion in the top 36 wasn’t a one-time thing.

6. Alabama missing nationals for first time since 1983: With the switch in format in 2019 that meant only eight teams would make nationals, we knew at least one perennial qualifier would miss out. That team just happened to be Alabama. And while it didn’t come as a complete shock due to Alabama’s recent struggles to remain nationals prominent, a team missing the big show for the first time in over 30 years is always a surprise.

5. Denver makes first four-team final: When journalists and fans predicted the first set of four teams to make the final, we don’t think Denver made anyone’s list. But the Pioneers’ rise to the top tier of college gymnastics was impressive albeit unexpected, as they finished with their highest ranking in program history and an individual national champion in Lynnzee Brown on floor.

4. The death of event finals: No matter the reason (the claim was a two-day competition is more TV friendly), we don’t think anyone expected to lose event finals at the division one level. Plus, a number of the fixes to make handing out individual awards on semifinal day just don’t quite work—can you say too. many. ties?

3. Four on the Floor: We’re not so much surprised at the four team final but rather the fact that it finally happened after people like Greg Marsden pushing for it to be so for at least 20 years if not longer. With the first Four on the Floor (can we please change that name?) in 2019, gymnastics entered a new era, one with no byes in postseason competition. Rejoice!

2. Georgia missing nationals in 2010: If you only started following NCAA gym in the latter half of the decade, you don’t know just how dominant the Gymdogs were in the 2000s and how big of a shock it was for the team to finish third at regionals in 2010 and only send two individuals to nationals. The team was the five-time defending national champion, and while a sixth title was not super likely, missing nationals completely was a huge shock to everyone’s system.

1. Florida and Oklahoma tying in 2014: Individual gymnasts tying for titles is common, teams tying during the regular season is rare, teams tying for the national title is nearly unheard of, but that’s exactly what happened in 2014 with both the Gators and Sooners being crowned national champion, illustrating perfectly both teams’ dominance and success this decade.