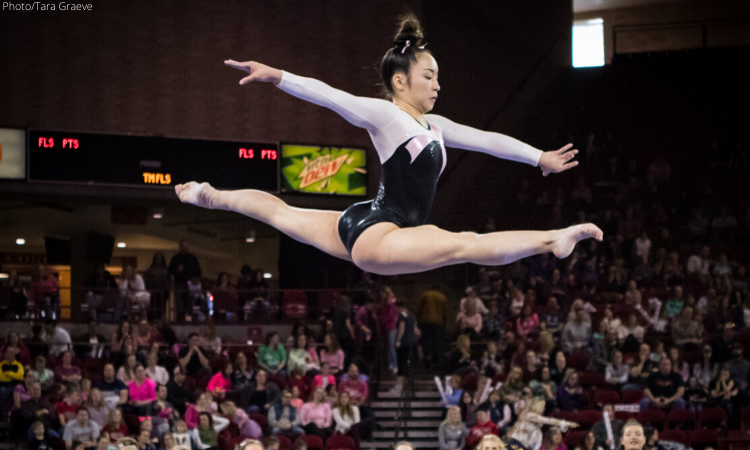 The obligations that come with being a Division I collegiate athlete involves balancing school work with practice, traveling, and all of the physical fatigue that’s felt on a daily basis. The process of maintaining or improving your physique as well as consistently turning out sufficient grades is comparable to a full time job. This job exerts an immense amount of stress on student-athletes. However, nobody would ever know of their true struggle by the looks of their Instagram pictures and Twitter posts.

To the public, it seems like an extraordinarily exciting life to say the least. Having experience with this job as a DI gymnast, I am here to share the truth about my personal conflicts hidden behind every well-earned title, award, and trophy.

During my freshman year of college, I was guilty of portraying my life as incredibly perfect in every Instagram post, hoping to mask what my actual full time job entailed. This job allowed no vacation time, no lunch breaks, and even followed me to sleep. The trick here is, I couldn’t just up and quit this job. Everything I had ever trained for and everything my family had sacrificed led me to this incredible opportunity. This job also came with the heavy pressure of living up to every unspoken expectation that was never said-but felt all too real.

Well, what if I failed at this job? That’s not an option-because if I failed at this once-in-a-lifetime opportunity, I was sure that I was a failure at life. This is what it feels like when you’re dealing with an illness that can make you deny its own existence. I’m personally referring to OCD, anxiety, and depression.

I was able to hide it from everyone. It felt like all of my emotions were hidden in a delicate glass bubble that needed constant protection. I took pride in hiding my secret from the world around me. I’ve dealt with numerous injuries and knew I wasn’t physically injured, therefore this inconvenient feeling must have been pure weakness. Deep down I knew I wasn’t weak, or at least I didn’t want to be. However, this “weakness” grew bigger until it was all consuming.

That’s when I slipped up. I put on my “everything’s fine” face like most athletes do, and walked to my mother’s car. One look from her, and my fragile bubble shattered. Before she could even say anything, I was in tears. I couldn’t tell her why I was uncontrollably crying and could barely breathe. Nothing was wrong, in my mind. I had a full scholarship to a private university, friends, free meals, free traveling, and much more.

I had everything I could ever ask for, so why was I feeling like this? It felt like the world was going to end at any second; I didn’t know when, and I couldn’t stop it.

Previously, I was always able to run to the bathroom just before I melted down, whether that be during lectures or practice. I couldn’t hide anymore and I began seeing a therapist and utilizing other resources presented to me by my DU family. I talked about every worry, expectation, and self-appointed failure. However, my mindset stayed resistant because I didn’t want to give myself an excuse for what I presumed was my own incompetence.

Deep down, I knew the reality of my situation. Despite this, I had convinced myself that this would be considered depression for anyone else, but for me, it was pure weakness. My mind was torn between my logical thoughts and my personal ones. I told myself that my situation was an
imperfection that needed immediate fixing, because of course, perfection meant everything to
me.

At this point I was ready to give up everything. I didn’t just want to be a student-athlete, I
wanted to be one of the best because I firmly believed that if you’re not one of the best, then
you’re average. I believed that nobody remembered or cared about average, so you might as well
stop wasting your time being “average.”

In my chase for perfection, I continued to hear the same thing from everyone around me.
They urged me to genuinely utilize my resources and lower my walls. There was no distinct
switch that flipped in my mind. My only thought was, “Fine, I guess I’ll try. I’ve failed at this
life anyways.”

Soon after I decided to be open and honest with myself and others, I made a promise to my head coach. I promised that I would use every resource available to me and face every step with an open mind. To this day, that has been the most valuable promise I’ve ever made.

I already felt like I was lacking in doing my job as a DU gymnast, and the last thing I wanted was to disappoint the people that believed in me and gave me this opportunity.

Around a month after initially getting help, I started to open up to my team. It sounds silly, but it started with me making a conscious effort to listen. Beforehand, the girls and even the coaches would speak to me, and I would wonder what they were saying afterwards. My mind was busy either mentally reviewing for a test, or making a list of all the things I needed to do before bed.

Then, in what seemed like an instant, competition season began. I found myself studying on the plane, bus, in the hotel, and even before warmups. Getting closer to my teammates and creating memories was definitely not my priority.

I remember one night after dinner before an away meet, all of the girls wanted to stay downstairs in the hotel to play a game, but I planned on returning to my room to do school work. I don’t know what made me stay, but I’m glad I did. Before I knew it, I was smiling and even laughing. These emotions weren’t forced, but instead came to me with ease.

I felt this spark inside of me, one that I hadn’t felt for months. It didn’t feel like I was merely surviving and existing in the space I found myself in. I felt alive again, and I didn’t want it to go away.

As the season progressed, I developed legitimate connections with each of my teammates. They were able to see the pain in my eyes even when I had a smile on my face, and they’d try to find some way to get me out of that zone, even if it was just for a brief moment. To this day, I cannot thank them enough.

Looking back, I wouldn’t have wanted my first NCAA National Championships to be with anyone else. It didn’t matter if we won because I was with the team that held my hand during the tough times and danced with me during the greatest. They taught me how to live in the moment and put everything I had into what was right in front of me.

My journey was long and tiring, but I honestly feel like I would still be at my worst if I didn’t have my DU family pushing me in the right direction. Even when I lost all hope, they refused to give up on me because they saw something in me that I never knew was there.

I can now see my “job” from a new perspective. I genuinely do not see it as a job anymore, but instead an opportunity. Because of this, I get to feel that spark inside of me everyday without worrying about protecting my fragile bubble from the world.

Even though I’ve started to overcome my mental illness, I know it’s not gone forever. There’s no way in knowing when it will pop up again. However, I certainly know that once you’ve traveled through the darkest part of your mind, all the way to the brightest, anything is possible. That’s when you truly know that you hold total control over your most powerful weapon.

See the video that accompanies the original post here.