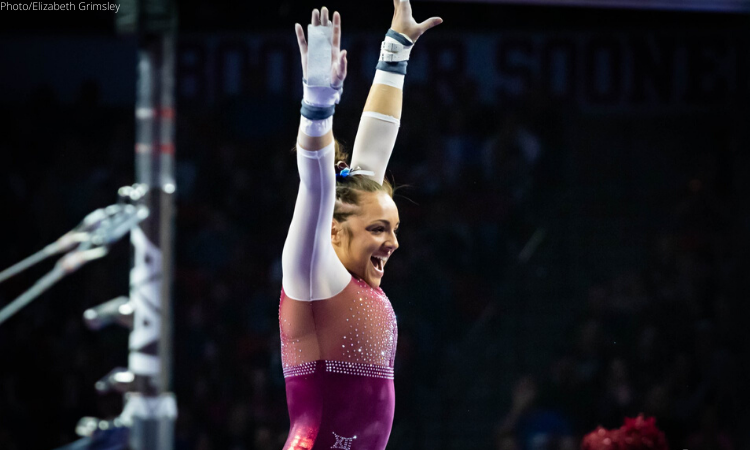 This week, four editors sat down to discuss their draft strategies, because Maggie Nichols, arguably the most sought-after gymnast, can only go to one fantasy team in each conference.

Do you include incredibly sought-after gymnasts like Maggie Nichols or Kyla Ross?

Elizabeth: I always draft Maggie Nichols first because if I get her, I’m golden, and if not, it doesn’t cost me anything. In fact, I use my top five or so spots on my draft for those uber-popular gymnasts that I may or may not get, but if I do, I’m going to be sitting pretty (I’ve gotten the oh-so-consistent and high-scoring MyKayla Skinner twice in her three years using this strategy).

Emily M: I battle with this every year. It’s hard to pass up the opportunity! But I’m always tempted to put someone like Lexy Ramler or Kennedi Edney at No. 1; those gymnasts who I’m slightly more likely to land, and who are still superstars.

Jenna: Yes, of course! I’ve never been high enough in the draft to get them, but maybe one day I will be. I was wavering on Maggie Nichols this year because of her injury keeping her out of some lineups last year, but since she competed both vault and floor at the recent intrasquad, she’ll definitely be in my draft.

Tara: My strategy is similar to Elizabeth’s. For me, there’s no harm in including them at the top. I’ll be extra happy if I get them and, if not, it’s not like they’re the only gymnasts on my draft. After all, someone has to get them.

What would you say is your overall draft strategy, specifically for your top 25?

Elizabeth: My top 25 is almost exclusively all arounders. If you can get four or five solid four-event gymnasts on your team, you’re going to do well at the game. These all arounders include a mixture of top gymnasts according to last year’s NQS rankings, one or two freshmen I think will excel and round it out with strong and consistent all arounders from middle tier teams—think Boise State’s Shani Remme or Arizona State’s Cairo Leonard-Baker.

Emily M: I have a spreadsheet (don’t we all?) where I track everyone’s average and high scores. My top 25 in the draft is pretty much the top 25 all arounders by average, but I do make some adjustments. I always put some top-tier freshman in there, and a very important event specialist or two—like Brenna Dowell in past seasons. The top five is the most critical to me, and coming up with how to order them causes me anxiety until the minute the draft closes. I also try to throw in at least two or three names who I consider under the radar but key: Denelle Pedrick, Jessica Yamzon, etc. Draft a super-reliable but not flashy all arounder in your top 20, and you’re nearly certain to get them. It’s important to have those reliable gymnasts on your team!

Jenna: My drafts are always data based with each gymnast getting a certain number of points per event, so naturally the top 25 is mostly all arounders who can contribute high scores on all events. However, some strong three-eventers always sneak in as well—this year the most likely ones are Olivia Trautman, Sabrina Vega, Milan Clausi and Khazia Hislop.

Tara: I use my top 25 to draft top all arounders and three event gymnasts. The more high-scoring events a gymnast has, the higher I put them. Beyond that, I’ll sprinkle in freshmen I think will be stars, being extra cautious not to rank too many freshmen too high.

Do you have any other specific or unique strategy concerning your top 25?

Elizabeth: Of course, it depends on the drop of gymnasts each year, but I always throw in one or so wild cards higher than logic or ranking would otherwise call for on my draft. This might take the form of putting Remme in my top five to almost guarantee I get her or taking a chance on a two-event star or under-the-radar newcomer.

Emily M: I’m the Big Ten editor, so I tend toward dropping gymnasts in that conference higher than perhaps math suggests I should. That said, can you really draft Lexy Ramler, Natalie Wojcik or Taylor Houchin too high? Of course, the problem then becomes wonky cross-conference scoring. I balance my Big Tens out with a lot of names from the most reliably high-scoring schools right at the top: LSU, Oklahoma, Florida.

Jenna: In past years I either didn’t put any freshmen in my draft or I placed them too low to actually get them on my team—this is the first year I’ll be including freshmen in my top 25. This is a big departure for my data-loving self, but I think it’ll be worth it!

Tara: I tend to put a few reliable gymnasts from lesser-known schools around the No. 25 spot. Think gymnasts who have a strong reputation of scoring well on multiple events but won’t necessarily be as high on other drafts.

Who is your personal “Maggie Nichols” on this year’s draft? A.K.A. Who are you drafting first this year?

Elizabeth: After three years with Nichols at No. 1 for me, I’m switching things up and actually giving Kyla Ross my top spot for a couple reasons. Nichols’ injury history leaves me slightly wary, especially the amount of kinesio tape she’s been wearing on her knee during preseason. While both gymnasts have incredible scoring potential, I can see KJ Kindler being careful with Nichols in her final year. But that’s me 100% trying to tell the future.

Emily M: Oh gosh I’m sure I’ll change my mind about 30 times between inputting my first draft and it closing on the 31st. It will be one of Ramler, Wojcik or Kyla Ross most likely—I agree with Elizabeth about Kindler being cautious with Nichols, especially early in the year—but don’t put it past me to sneak Trinity Thomas or Sierra Brooks in there at the last second on New Year’s Eve.

Jenna: All my current data points to Kyla Ross, but it depends on whether or not I change my formula (again) before the draft deadline!

Tara: Honestly, I’ll probably change my mind too many times to count before drafts close, but it’s probably going to be one of Kyla Ross, Nichols, Lynnzee Brown or Maddie Karr.