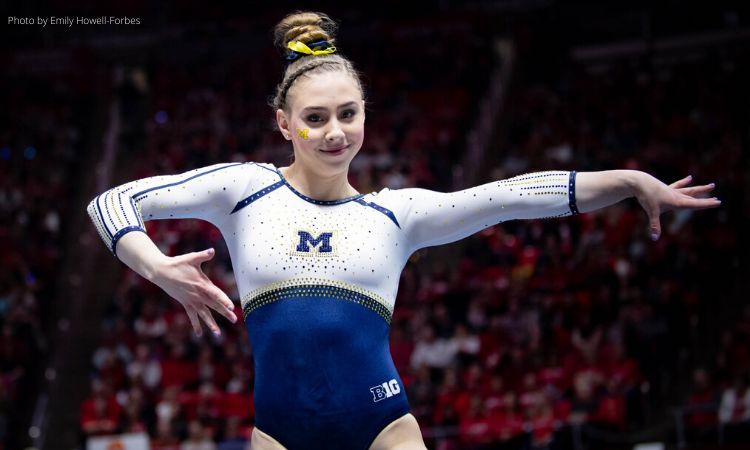 With just over a month remaining until the 2020 season kicks off, we are officially in intrasquad and intersquad season (and yes, there is a difference). This is the time for teams to give (impatient) fans a first look at new routines, incoming freshmen and show their overall competition readiness ahead of when the season officially kicks off in January.

Today we are treated to a fun State of Michigan-esque exhibition meet featuring Central, Eastern and Western Michigan at Michigan. Most pointedly, fans will be eager to see how Michigan is looking without standout graduated seniors Olivia Karas and Emma McLean. The Wolverines also boast one of the strongest freshman classes in the country, headlined by 2019 J.O. national champions Sierra Brooks and Gabby Wilson and giving us our first look at where they may fit into lineups. Central, Eastern and Western Michigan boast exciting freshmen of their own: 2019 J.O. national qualifiers Hannah DeMers for the Chippewas, Mickayla Stuckey for the Eagles and Payton Murphy for the Broncos.

Michigan won this meat last year with a score of 195.125. Each team will be allowed six competitors on each event with up to two exhibition routines

Your College Gym News editor Kalley is here (on her couch in Minneapolis) to live blog the exhibition. Please bare with me: This is my first live blog, and I’m already seriously questioning my sanity by deciding to make my blogging debut by covering a quad meet.

First glimpse at the Michigan leo for today, which happens to be one of my favorites:

Leotards for today. Meet is at 4 PM!! #GoBlue pic.twitter.com/FltlLoMlp3

I will go back and update scores as I am able to.

Alright, fingers crossed the stream works and my dog doesn’t get into anything she isn’t supposed to.

Gregory: 9.625
Price: 9.550
Roberts: makes her return to competition after taking lasr year off due to injury. double pike to start, looks decent. Some legs on her second pass. didn’t get to see the final pass because they cut to bars. 9.575
Rondeau: double tuck to start, little low but nice. switch side + split 1/1 looked ok. second pass clean. FHS + rudi + straddle to finish, solid. 9.775
Satler: 9.575
Dobronics: 9.850
Stuckey (Exh): First look at Stuckey today, on floor, which should be one of her best events. Already a fan of the energy. solid double pike, nearly stuck. pretty leaps. Hands down on her double tuck to finish, which is too bad. SO MUCH energy, though – she is going to be great to watch on this event.

Pitchell: 9.150
Tong: 9.700
DeMarinis: 9.800
Sydney Williams: 9.450
DeMers: 9.850
Pedrick: HUGE triple twist to start, wow. interesting little clapping interlude for her dance, I like it. Second pass clean. Double pike to finish, controlled step. All around a solid routine and she should be happy with that! That triple twist though. 9.900

(Looked like a rough rotation for Eastern Michigan on bars – hard to know without seeing what happened, but I’m alarmed by two scores lower than 9.000.)

Osman: Terrible camera angle right now, why are we so zoomed in. Solid second pass, huge double pike, a little uncontrolled on the landing. 9.725
Koulos: Huge double full for her first pass. stuck double pike, chest just a TINY bit low on that landing. solid leap series. falls on her last pass. She looks disappointed, I imagine this isn’t the debut she was hoping for. But you can see how much potential she has on all of her events today. 9.075
Brenner: Big full-in to start, beautiful. 5/2 to front lay for the second pass, very nice. Switch side + popa solid. Double pike to finish. Overall solid routine. 9.850
Brooks: What is with this super zoom? Can we not? Okay, giant full-in to start. Wow. A little short on the second pass but covers pretty well. Sky high leap series. A little short on the double pike as well, but again, covers nicely. Brooks is going to be such a powerhouse for this team, you can already see it.
Wojcik: Full-in stuck COLD. Wow.  Beautiful second pass – her extension is so gorgeous. FHS rudi + straddle. Overall a beautiful routine. 9.900
Wilson: Full-in to start, but I honestly thought that was a double double for a quick second and got excited. She has so much personality on floor, I love it. Pretty leaps. The landing on that double pike scared me, are your ankles okay? 9.825
Farley (Exh): Okay, I like this music. Double tuck to start, mostly stuck. Double pike a tiny bit short but stuck. Hello, there. Some bent knees on her final pass but again, mostly stuck.
Maxim (Exh): Beautiful double tuck to start. Almost tips over on her floor choreography. Beautiful, high leap series. Super high double pike, slightly flexed feet. Overall solid.

All in all this was a great first look – at Michigan especially – giving us the chance to see just how incredible Sierra Brooks and Gabby Wilson are going to be for the Wolverines this season. Central Michigan freshman Hannah DeMers had a fantastic debut; she will most definitely be one to watch in the future as well.

There were some wobbles and falls, but that is to be expected at this point in the pre-season – even the veterans need to work out some of the nerves before season gets into full swing. Notably absent today was Abby Heiskell for Michigan – unclear why she didn’t compete today, even in an exhibition.

Thanks for your patience and following along with me today. Can’t wait for the next (preferably dual, not quad) meet.