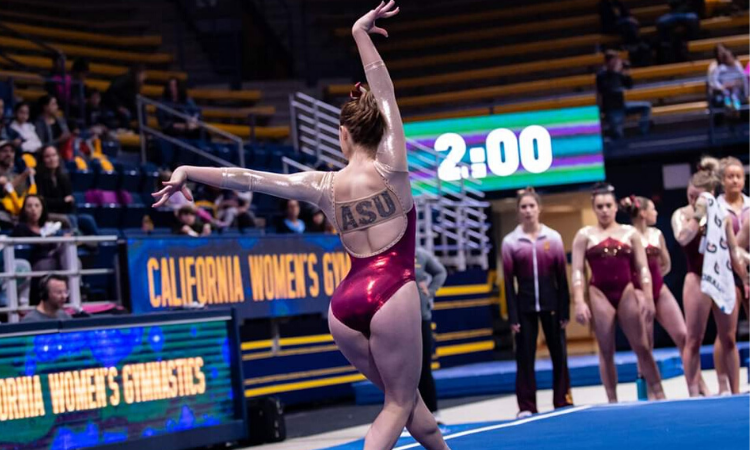 Welcome to Arizona State’s 2019 Maroon and Gold Scrimmage! The Sun Devils are coming off back-to-back seasons cracking the top 25 in the rankings, and tonight we’ll get a sneak peak of what’s in store for 2020.

Arizona State lost eight gymnasts from last year’s team—including beam standout Justine Callis and 2012 Olympian Anne Kuhm—and only have seven returners who competed last season. They’ll be relying heavily on star junior Cairo Leonard-Baker and a crop of talented freshmen to fill those gaps. Keep an eye on freshman and former Canadian elite Hannah Scharf. She’s especially great on bars but has the potential to be a stellar all arounder and help the Sun Devils stay in the postseason conversation.

The team will be divided into two squads, Maroon and Gold.

Being an intrasquad meet, the format will be a little different. Per the team’s official release, “The number of participants on each event will vary, but only the top three scores will be counted.” Live stats will be available, as well as a live stream of the meet.

Ginn (Gold): Tiny hop back on her Yurchenko full, and a little piked down; good power, though! Glad to see her in the lineup. 9.800.

Redmond (Maroon): Form breaks throughout, okay on straddled Jaeger… She seems a little nervy. Comes off after the bail, too bad; finishes strong with a great, stuck double layout!

Boyer (Gold): Missed the landing because of the camera angle, but Yurchenko full looked good in the air. 9.775.

Scharf: HUGE piked Jaeger but lost it on her transition, scraping her knees on the mat but pulled it out! Finished with a solid FTDT, small hop; way to fight through.

Leonard-Baker: Great Maloney; seriously, no one does a better toe shoot in NCAA (and piked, no less); flawless FTDT dismount; 9.850.

Wilson (Gold): Pretty Yurchenko full; a little off-center and a little bouncy on the landing, but overall nice job! 9.825.

So, same story as last season on vault: Really nice Yurchenko fulls, but no 10.000 start vales to absorb all the hops on the landing. Aside from Leonard-Baker, bars looked a little nervy; the talent is definitely there, as is the mental strength to fight back after mistakes.

Ginn (Gold):  She’s going for those handstand! Good Tkatchev and a double layout dismount; some soft knees and flexed feet throughout, but solid start.

Thompson (Maroon): Nebraska transfer with a very good Yurchenko full; a little piked down, but good distance and amplitude. 9.725.

Gutierrez (Gold): good Gienger, fabulous handstands (and she immediately comes up short, lol); best double layout dismount of the bunch so far, good form and high amplitude. 9.700… Not sure about that score compared with the others.

Miller: Okay Yurchenko full, really had to pike down and landed with a low chest. 9.700.

Wilson: Such a good straddled Jaeger; bail’s a little wonky and final handstand is short, but very nice FTDT dismount. 9.825.

Leonard-Baker’s Yurchenko full remains the standout of the Sun Devil’s lineup, and Morgan Wilson is still a gorgeous bars worker. Pleasantly surprised by how good Gutierrez looked; hope to see her in future lineups

Ginn (Gold): Missed her fun new mount, but the commentators said she “stuck it cold;” was a little off on her bhs loso, but she held through it; love her pike jump; a little shy on her straddle half; great gainer pike dismount. 9.675.

Williams (Maroon): exhibition; bhs 1.5 (I think she balked on a rebounding skill); solid jump series, love her wolf full; high double tuck to finish; she did the Simone “Oh!” to finish, and I love it!

Thompson (Maroon): Right off the bat, love her presence and dance; strong double pike to open; didn’t quite get the amplitude on her jumps; Rudi with some form and chest down on the landing; 1.5 to punch layout to finish; some form and endurance to work out before season, but a lot to like about this routine. 9.600.

Wilson (Gold): Missed the beginning of her routine; retty, pretty bhs los; stuck gainer full to finish; she never scored below 9.700 last season, and it’s easy to see why. 9.775.

Miller (Maroon): Really liking her presence and confidence; short landing on double pike; not quite hitting positions on straddle; a little low on front lay to front full, but pulled it out; good double tuck to close; if she can clean up the details, this could be a fabulous addition to the lineup. 9.625.

Scharf (Maroon): I had some technical difficulties and only saw her landing a double pike on her knees. Thankfully, she seems to be okay. 9.050

Leonard-Baker (Maroon): Ooh, fantastic double layout to open; 1.5 to front full, excellent; gah, she really sells her dance; high double pike to finish; Cairo is gunning for all the accolades this season! 9.925, and I’m okay with that score.

So, I’m really excited about what I’ve seen so far on floor. The details — especially hitting positions on leaps and endurance — need some work to be competition ready, but the choreography and performance are definitely there! Beam also looks to be heading in the right direction. Really impressed by the form and confidence we’re seeing so far.

Leonard-Baker (Maroon): Her standing loso is so solid; chest low on straddle half; usual form on bhs loso, and a leg up check; beautifully stuck 1.5 dismount; first obvious error, and still pulls a 9.800.

Wilson (Gold): Coaches are talking about getting her into the all around? Well, do it! Clean front lay to front full; good leap series; love this gentle, intentional choreography; only does a layout to finish (veteran move);

Thompson (Maroon): Bhs loso loso with a small hip check (her form was beautiful); GREAT form and amplitude on jumps; aerial full with a step, really pretty; some jitters, but a strong routine; 9.725.

Gutierrez (Gold): Powerful double full to open; love her dance; punch Rudi, beautiful; really nice Popa; front lay and sits her full; give it a month, this will be a nice addition to the lineup. 8.900.

Boyer (Gold): Front layout to Rudi, gorgeous; step back on her double pike, but great set; switch full to wolf jump, great; 1.5 to punch tuck (meant to be a front lay), but good improv from the freshman. 9.675.

I stand by my assessment from the last rotation: The Sun Devils have a lot of potential on both beam and floor this season. Really nice skills, good fundamentals, and great mental toughness. There are definitely some details that need polishing, but things are looking good for Arizona State!

Leonard-Baker earned a well-deserved 39.450 , but the three freshman all-arounders were also impressive: Juliette Boyer notched a 39.050, Gracie Reeves with a 38.900, and Hannah Scharf with a 37.900. Expect those scores to increase as they hit their college gymnastics stride.