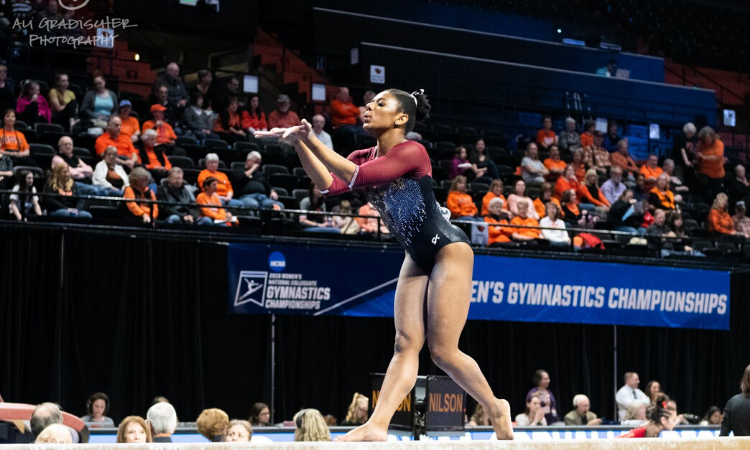 It’s hard to believe it’s almost time to start compiling your fantasy draft list(s), but the 2020 season is just over a month away. What else is there to do during this down time before NCAA season officially kicks off? While it can be easy to throw the obvious stars at the top of your list and hope you get lucky, we have data to prove you may be better off giving some lesser-known names a higher draft priority.

We reviewed the top 50 Fantasy Gym teams from 2019 to see what gymnasts they had most in common, and—spoiler alert—it wasn’t Maggie Nichols (although we think anyone who had Nichols in their lineup would not complain). The gymnasts outlined below are the ones who consistently scored well week after week, and many of them are ones that fly mostly under the radar.

Please note: The list only includes currently competing gymnasts, but we’ve outlined the graduated seniors at the end of the feature if you are curious to see if your Fantasy Gym favorite made the list.

University of North Carolina senior Khazia Hislop was the No. 1 gymnast that the top 50 fantasy gym teams had in common in 2019. A stand-out athlete for the Tar Heels, Hislop has been beautiful to watch since she was a freshman. While not an all around competitor, the power, poise and precision she brings to her three events more than elevates her to top drafting status. Check out this routine if you need further proof.

Lynnzee Brown was an absolute powerhouse for Denver during her sophomore campaign and was a big contributor to its record finish in 2019. In addition to being phenomenal, she was also extremely consistent. With an NQS above 9.900 in all but one event, and a career high 10 on floor, Brown should absolutely be a top draft pick.

BYU senior Shannon Evans made a splash last year with her Super Mario Bros-themed floor routine, and rightfully so. She is a standout all around gymnast for BYU, but she especially shines on floor exercise and uneven bars. She was named the MRGC Gymnast of the Year in 2019, and the Cougars will definitely be looking to her to lead the team in 2020.

Natalie Wojcik burst onto the NCAA scene like the vaulting superhero we didn’t know we needed. After sticking vault after vault (and lots of Tweeting outrage at the lack of perfection being thrown her way), she was finally awarded the “Leonardo DiCaprio Oscar” 10 on one of her less impressive attempts. Her skills extended well beyond vault, though, and the Big Ten Freshman of the Year was also an NCAA champion on beam, and was a key contributor on all four events for the Wolverines.

Bowling Green senior Jovannah East has been a standout athlete for the Falcons every year she has competed, and her senior year shouldn’t be any different. While she may have a slight weak spot with uneven bars, the rest of her events more than make up for it. Check out this incredible floor routine for further proof.

Nebraska senior Taylor Houchin has so many pretty routines that it was difficult to choose only a couple to highlight here. This vault should almost certainly have scored a 10, and her lines on uneven bars are simply stunning. Like many gymnasts from the Big 10, she is often overshadowed by some of the bigger conference standouts, but she is a gymnast that should absolutely be high priority on every draft list.

With one of the most criminally underrated floor routines from 2019, Autumn DeHarde is a fantastic gymnast to add to your list of must-haves for 2020. She has beautiful floor and beam routines that could have a place in any fantasy gym lineup, and vault as an option that could work in a pinch too.

What even needs to be said about Kyla Ross? If you have been living under a rock and want to learn about why the Pac-12 Gymnast of the Year (not to mention world and Olympic champion) should be on your fantasy gym team, may we direct you to (some of her) 10s on vault, bars, beam and the oh-so-elusive 10 on floor.

Remember when Auburn shocked the gymternet by beating LSU last year? The moment that absolutely stood out the most from that epic victory was Derrian Gobourne’s floor routine. A solid option on all four events but truly a standout on floor and vault, Gobourne would be a fantastic addition to any lineup. Oh, and she has some of the highest releases on bars in the NCAA.

More quietly impactful than her counterparts on this list, Alexandria Ruiz was consistently beautiful across all four events during her freshman campaign at Denver. Having a gymnast who gets high 9.8s week after week, with a 9.900 to 9.950 peak is essential for a solid lineup. It was hard to land on just one routine to highlight, but this floor routine is too fantastic not to share.

Denver senior Maddie Karr has been an all star for the Pioneers from the moment she stepped onto the competition floor, scoring a perfect 10 on vault during her freshman year (and many others that probably should have been 10s as well). She is great on all four events, as evidenced by her lowest NQS being a 9.905 last year, but she truly shines on vault and floor.

If there was one gymnast who has been most deserving of a 10 she has yet to receive, it would be Minnesota junior Lexy Ramler. The Queen of Toe Point™ is as close to perfect as it gets on beam, and let’s not forget all of the skills she has in her arsenal on bars. She started competing a Yurchenko one and a half on vault last year, and her floor has been improving consistently as well. Her 2019 season ended gloriously with a second place all around finish at the NCAA championships, and we expect she has her eyes on a first place finish in 2020.

Madi Dagen had a great freshman year, proving to be a key contributor on her three events for the Beavers all season long. She is truly fantastic to watch on floor, and has a stellar beam routine as well. It’s easy to forget she was a freshman last year with how easily she fit into lineups and set herself apart—and it will be fun to watch her continue to shine.

Washington junior Geneva Thompson, who competes three events for the Huskies, proved herself to be a key contributor in her sophomore campaign. She is truly the most fun to watch on floor where her love for dance is evident. She has career highs of 9.900 on both vault and uneven bars and would be a great option for any fantasy gym lineup.

Denver junior Emily Glynn has been a standout competitor on bars for the Pioneers since her first season in 2018. While that is the only event for which she had an NQS in 2019, making her appear to be a one-event specialist, she has competed on vault and floor for the Pioneers as well. On vault she has a Tsuk full, which is a 10.0 start value—and it has looked pretty spectacular in training videos.

Junior Anne Maxim was surprised at Michigan’s spring banquet in 2019 with a scholarship, and it’s easy to see why. She was a key contributor on both vault and bars for the Wolverines, proving to be an invaluable asset to the team since she transferred from Michigan State in 2019.

A standout on floor and vault, junior Kaitlyn Yanish helped catapult the Beavers to the upset heard ‘round the world when they defeated Florida to advance to NCAA championships. She has some of the biggest tumbling you’ll find across any team (have you seen how open her double back is, and how pointed her toes are?). She would be an excellent addition to your draft list, especially if you are in the market for a vault and floor specialist.

Meredith Sylvia, a junior for Auburn, is one of the only event specialists on this list. It can be difficult to prioritize drafting a gymnast who can only be used on one event, but if you are going to do it, there is a real case to be made for Sylvia. She has a consistently beautiful beam routine and regularly anchors for the Tigers.

Most well known for her double twisting Yurchenko vault, Denelle Pedrick is an all around gymnast without a true weak event. She is consistently strong across all four events. Being able to put up a gymnast on any apparatus and feel confident she will bring in a solid score is fantasy gym gold.

Like Pedrick above, Minnesota junior Ona Loper is most well known for her vault, but she is a very strong all around athlete without much variation between her highest and lowest NQS. She is especially strong on vault and floor, two events where she is a big help to the Gophers. Easily one of the most underrated draft options, we wouldn’t be surprised if more fantasy gym players wisened up and moved her up on their list in 2020.

Shockingly the only Oklahoma gymnast to appear on this list, junior Jordan Draper became a staple in the Sooners’ floor lineup last season. Floor was a less consistent event than normal for Oklahoma, and it spent a lot of the regular season trying to find a lineup that could consistently hit five routines without Maggie Nichols, who was out the majority of the year with a foot injury. Draper emerged as the top choice for that role, and one we’d expect to see her continue to improve upon in 2020.

Oregon State senior Maela Lazaro is an absolutely beautiful gymnast to watch on beam. An anchor for the Beavers, she is also incredibly consistent: She has hit 21 out of 24 beam routines over the course of her career. As mentioned above, it can be hard to prioritize a one-event gymnast when it comes to creating your draft list, but if you’re going to do it, you want someone who is consistent and scores well—and Lazaro does that in spades.

Junior Hannah Nipp is one of the strongest athletes on Southern Utah’s roster, with strong NQS on all three of her events. While she is definitely an asset on bars and floor, where she truly shines is on beam. Truthfully, she’d be worth drafting for her beam routine alone, but the fact that she also competes on floor and bars makes her a solid option for any fantasy draft list.

We would be remiss if we did not acknowledge the graduated seniors who also appeared on this list; they are outlined below.