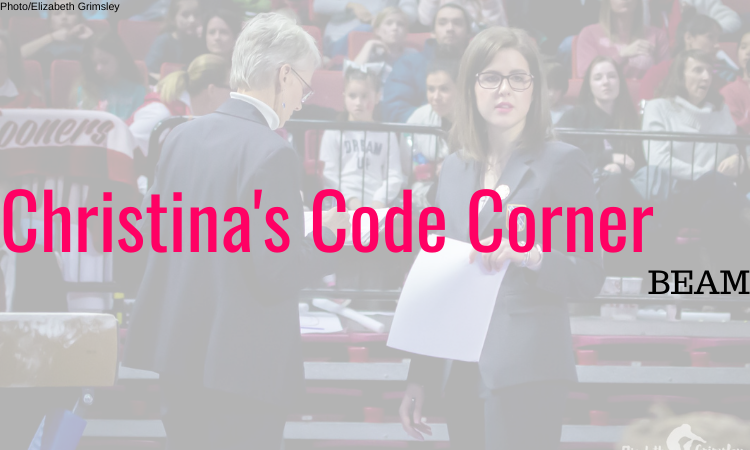 Welcome back to Christina’s Code Corner. If you are new to the series, I commentate for North Carolina gymnastics, and I love to read the code during preseason! I am taking you event by event through the changes to the 2020 code of points (in Olympic order, of course). You can read about the vault changes here and the bars changes here.

This week, we are moving onto beam. Here I’ll focus on the major skill value changes from 2019 to 2020 and the basic composition requirements, rather than all skill values. For a list of common skill values, head over to the Balance Beam Situation.

Skill values: Let’s start with skill values, since there are a few key skill value changes that will affect start values.

Skills upgraded from D to E for the 2020 season:

My take: Let me start with the positives: I am very happy to see the double turn and the punch front upgraded to E elements. It is long overdue. This change is putting the double turn in the same category as illusion turns and switch rings for difficulty, which is appropriate.

For punch fronts, I think it is fair to make it an E, since aerials are rated D and punch fronts are clearly more difficult than aerials. Sure, they are not quite as difficult as some other E-rated elements like Arabians or back fulls, but we see those skills so rarely it is worth it to differentiate a punch front from a side somi.

I agree with Nastia here. Now that Sarah Finnegan had graduated, I can safely say I do not know of anyone doing a pretty wolf turn in college gymnastics.

I do not necessarily want to see it banned, but I am also not on board with encouraging people to do it. I understand the argument that if you are going to upgrade the regular double turn you should probably upgrade the wolf turn, but honestly I think an upright double turn is harder than a wolf double, so I do not agree with making a wolf double an E value.

Start values: As a refresher, there are baseline start values for bars, beam and floor if you meet all the composition requirements. All routines must have at least three A elements, three B elements, and 2 C elements (all college gymnasts easily meet this requirement).

With that in mind, the baseline start value for bars, beam and floor has been lowered from 9.500 to 9.400 this year. On top of the baseline start value, a gymnast must perform more difficult elements (D- or E-rated) and elements in combination to reach a 10.0 start. So, in the 2020 season, gymnasts hypothetically have to add one tenth of bonus to their routines compared to 2019.

However, a “get out of jail free” clause was added via connection values in dismounts that means many gymnasts will not have to change anything in their routines.  Gymnasts will receive a 0.100 bonus for the following connections:

My take: I am a fan of giving connection value for connecting C dance into C dismounts; we rarely see these, and I love the idea of combining dance into dismounts. Maybe it will encourage gymnasts to try it.

I am not as big of a fan of the B acro connected to C bonus; what they are doing here is effectively punishing dismounts that start from a punch, like a rudi or front layout full. In this code, a front layout full dismount does not get the bonus, but a roundoff one and a half does, even though both are rated C dismounts. We will likely see more gymnasts using the roundoff or back handspring entry to take advantage of this bonus.

There is one additional composition requirement that did change slightly from last year:

My take on composition changes:

The only change was allowing dance/acro series instead of “pure” dance series. I’m generally in favor of this change, because it encourages more variety in routine composition. I’m always a fan of more variety in routines. Because the dance element has to be at least a C, it might lead to some exciting combinations like switch leap back tucks that we rarely see in college gymnastics.

There are also “up-to-the-level” requirements. These are essentially the same as composition requirements, except the deduction gets taken as a neutral deduction—like going over the time limit—instead of it being taken off the top of the start value. Don’t ask me why they make up-to-the-level a separate thing, except to possibly confuse fans.

For beam, there is only one up-to-the-level: if your acrobatic series does not receive connection bonus, you have to add some additional difficulty elsewhere in your routine. This rule affects the back handspring layout stepout, and the front aerial to back handspring connection.

If gymnasts use the front aerial to back handspring as their series, they have to also include EITHER another D or E acro element OR an E dance element somewhere else in their routine.

All of that was true last season. What has changed from last season is that in the 2020 season, you cannot include mount of dismount elements to meet that requirement.

Let’s take a look at how some of these changes would affect a beam routine I know a little something about, North Carolina senior Khazia Hislop.

Because Hislop uses the front aerial to back handspring as her series, she has to include a D or E element elsewhere in her routine. In the 2019 season, she was able to count her side aerial (D value) that she does right before her full twist dismount.

In the 2020 season, she will not be able to count that aerial because it is connected to the dismount. So, in order to start from a 10.0, she will have to make an upgrade somewhere. She will also have to add another tenth of difficulty to her routine, because her dismount does not receive connection bonus under the new code.

My take: The rule is essentially rewarding more difficult series, which I like as an incentive to take more risks on series. I also think it makes sense to require that the extra difficulty occur separate from the dismount, so that a gymnast is required to actually add additional skills.

Now, if I were in charge (a commentator can dream!), I would go a step further and not let the front aerial to back handspring count as a series.  Because the gymnast is switching directions, it is virtually impossible to have it be a true connection the way a back handspring layout stepout is. I do not make the rules; the laws of physics do.

Overall Takeaways: What is missing from this code is more artistic routine composition. For example, I would love to see a rule requiring gymnasts to work through their routines on releve (on high toe). Artistry and performance quality are areas that we should be expecting more of college gymnasts than level 10 athletes, yet it is not codified enough to reward the truly artistic beam workers.  That being said, I like the encouragement of the use of difficult dance elements through the 2020 code. I also think we will continue to see fewer gymnasts use the front aerial to /back handspring series, which will help elevate the level of college beam.