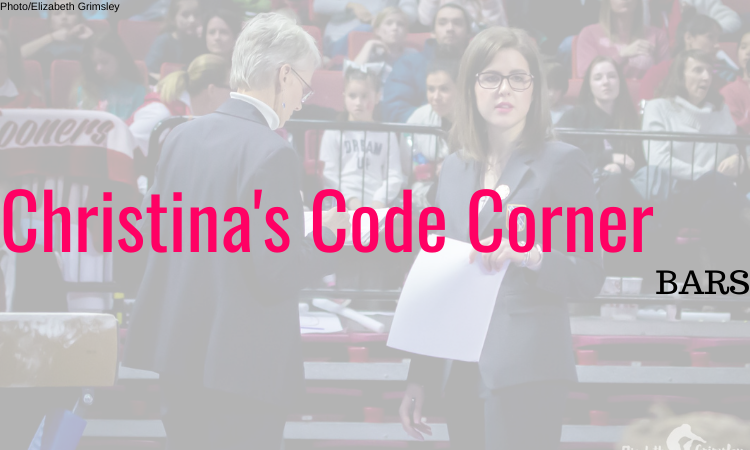 Welcome back to Christina’s Code Corner. If you missed the first article, on vault, you can check it out here. We’re going in Olympic order of course, so this week we are moving on to bars! Here, the biggest change involves start values, so we’ll start there and then move to skill value changes.

With that in mind, the baseline start value for bars, beam and floor has been lowered from 9.500 to 9.400 this year.

For bars, the basic requirements did not change from last year. Those are:

For a list of common skill values, head over to the Balance Beam Situation.

Up-to-the-level: There are also “up to the level” requirements. These are essentially the same as composition requirements, except the deduction is taken as a neutral deduction (like stepping out of bounds) instead of it being taken off the top of the start value.  These requirements are:

If you’re new to college gymnastics, you may not know the origins of the up-to-the-level release drama. In 2015, Alex McMurtry was the last gymnast up for Florida on bars at the Super Six (RIP). She did not have a D-level release in her routine (single or between bars) but was able to start from a 10.0 because of clever routine composition. She ended up scoring a 9.950 and Florida clinched the title over Utah by 0.050.

There was some disgruntlement in the gymnastics community that a routine without a “major” release would start from a 10.0, and that was part of why the up-to-the-level rule began the next season (2016). Fast-forward to this upcoming season, and there continues to be debate about requiring a single bar release.

Because the baseline start value was lowered to 9.400, gymnasts hypothetically must add one more tenth of bonus. However, the committee also added the following:

What that amounts to is that anyone doing a single bar release—the Jaeger, Tkatchev and Geinger variations are the most common; the Markelov, Comanici, Deltchev and Shushunova also qualify—does not have to make any composition changes. Gymnasts who have an E release—any Shaposhnikova half variation or a Bhardwaj—also won’t have to make any composition changes.

The vast majority of Division I gymnasts are doing single bar releases already or have an E release, so the change won’t affect most gymnasts. For those that don’t have one of these skills, some will still be able to keep their current routine composition because of the bonus they have in the rest of their routine.

Though we know she can do more releases, she wouldn’t have to change her routine to still start from a 10.0. Why? Because she has enough bonus in her routine without adding a release:

Let’s look at an example of an athlete that would have to make changes under the new code. Donna Webster from Cornell (in the top right box in the clip below):

My take: After all that discussion about routine composition, the reality is that this change is going to affect a very small number of routines. I can’t give a specific percentage because I still haven’t had time to watch EVERY college bars routine (a girl can dream), but I would estimate that fewer than 5 percent of Division I gymnasts will have to make changes to their routines.

I am in favor of the 0.100 lower baseline start value. What that rule is basically saying is that compared to level 10, you are expected to have an additional tenth in difficulty, which I think is representative of the higher level of college gymnastics competition.

But my question is: Why would you lower the base start value but then create a bonus that the vast majority of gymnasts already have? That’s not really meeting the spirit of increased difficulty.

What I wish they had changed:  Two words: Squat-on.

Rather than this difficulty bonus, I would have preferred that the committee created an up-to-the-level deduction for gymnasts who transition from the low bar to the high bar with a squat-on.

I’m not blaming the gymnasts of course; if I were competing college gymnastics, I would take advantage of the opportunity to catch my breath before my dismount as well. I am blaming the code of points for allowing it. Requiring a “real” transition like a toe-shoot or Maloney is consistent with the level of gymnastics expected in college. The code shouldn’t be allowing gymnasts to use the same transition to the high bar that they did in level 5.

Upgraded from C to D:

Upgraded from D to E:

My take: We rarely see these dismounts in college gymnastics, so I am not sure what the impetus was for changing these skill values. I do love flyaway twisting dismounts, and a front double twist deserves a difficulty rating of an E, so I’m glad they made that change. It would be great to see someone compete it!

In a few weeks we are on to beam! If you have any questions about beam that you would like me to address, comment below.