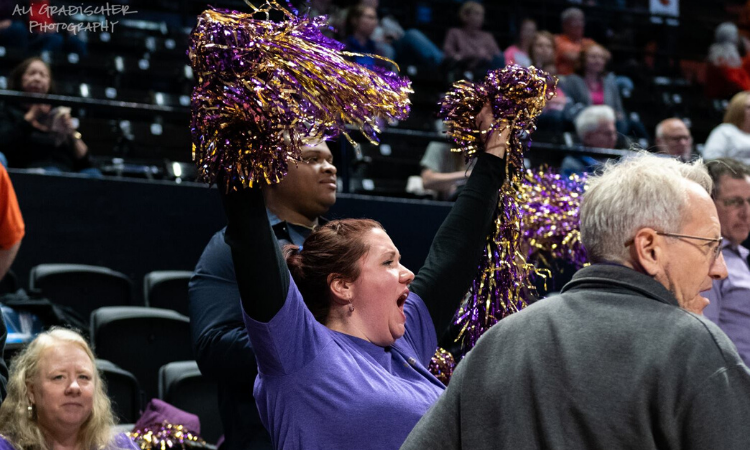 Every gym nerd has a story about what brought them into the fandom, and we’re no different here at College Gym News. Today we’re going to tell you our stories.

I grew up about an hour from Athens, Georgia, during the glory years of Georgia gymnastics. I was a score runner at the 2005 SEC championship in Duluth, Georgia, and remember sitting just two feet away from Terin Humphrey as she performed her vault, and running up to Florida’s Orley Szmuch for an autograph after the meet. I attended the 2008 NCAA national championships in Athens where the Gymdogs won their fourth-straight title. I was coached by two former NCAA gymnasts, one from Rutgers and another a Gymdog herself. I eventually went on to cover the Georgia team throughout my time in college and eventually, as you all know, start this very website. While I don’t have a specific moment that hooked me, I’m so glad it did.

I first got into gymnastics watching the Magnificent Seven in 1996 like every little gymnast in the ‘90s, and was absolutely enamored with Shannon Miller. My first brush with college gymnastics grew out of fandom for Bridget Sloan, so I started out watching Florida. I quickly became completely obsessed with Sarah Patterson and her amazing outfits as well. I was hooked! I became a Big Ten fan, too, since some of the women I competed against—badly!—in Illinois high school competitions were on Big Ten teams, like Allison Buckley at Illinois. My first in-person NCAA meet was the men’s Windy City Classic around 2010. I remember being awestruck that I could sit right in front of the high bar (didn’t hurt that Justin Spring was also standing right in front of me), and so impressed with the energy and atmosphere. There’s nothing like it.

I started watching elite seriously in the summer of 2013 as a college student and became peripherally aware of NCAA immediately but wasn’t that interested. In early 2014 when I saw GIFs circulating on Tumblr of Danusia Francis’ then-brand new dismount combination on beam, I decided to see if there was a way I could go to see it. Luckily, UCLA was scheduled to visit my university only a few weeks later, so I bought tickets for what would be my first ever in-person gymnastics meet. Francis was ultimately too sick to compete that day, but instead I fell in love with the home team, Washington, and went to almost every meet for the next four and a half years.

I had been watching elite gymnastics since the 2004 Olympics, but growing up in France, I had never been exposed to NCAA or university sports in general. A few years later, I went to college in Boston, and on one cold, wintery night I started rewatching the 2004 team final. I wondered what Courtney Kupets, one of my favorites from the U.S. team, was up to. I thought she had retired since she was off the elite scene, but little did I know I would discover a brand new world of gymnastics a few hours later.

I essentially fell down a YouTube rabbit hole, and I stumbled on the documentary “Under the Lights,” which immediately pulled me into Georgia gymnastics, Suzanne Yoculan and this team that was in the middle of making history. Back then, very few schools were live streaming their meets online, but thankfully UGA was one of them. I started watching every meet on Friday evenings on the shabby and grainy (but free) school-provided stream, and I was enthralled.

I eventually found out more about NCAA gymnastics and discovered that Utah and Alabama also had free streams for their competitions. Naturally, I started watching their meets, too, and the more I learned about these two teams and their own legendary coaches, the more I was hooked. Now, I’ve grown to love and become a fan of different teams, but my “first love” for Georgia will never go away.

I first started following gymnastics at the 2004 Olympics and was hooked. I was more or less a four year fan until Rio when I started closely following several gymnastics news sites on social media. One of them had an article on why you should follow college gymnastics. I vaguely knew it was a thing, but I didn’t realize how big it was. The fall after Rio, I watched as many college gymnastics meets that I could find, immediately became obsessed, signed up for fantasy gymnastics and the rest is history.

My first memory of watching gymnastics is following the U.S. team during Trials and the Olympics in 2008. I remember the full NBC fluff of Shawn and Nastia and becoming enamored with Shawn. While I loved that, nine-year-old me didn’t follow the post-Olympics gymnastics scene. In 2012, I started following more closely, and I even made Twitter and Instagram accounts dedicated to gymnastics. One of the accounts I followed was a girl who lived in Florida. When Florida won its first national championship in 2013, she posted an edit that piqued my interest in NCAA. That November, I also discovered fantasy gymnastics and immediately dove into it. I loved the idea of drafting a team just like so many others were doing with football. Fantasy gymnastics hooked me into watching the gymnasts on my team. The rest is history.

I’d always casually enjoyed gymnastics during the Olympics, but after Rio was when I decided I wanted to learn more about it. That’s when I dove right in. As with many things I obsess over, I fell down a rabbit hole pretty quickly, so it was only natural that I came across the world of college gymnastics. The 2017 season was the first one I followed, which was during my freshman year of college. So that means that my senior year is currently coinciding with that of those 2017 freshmen, which is both depressing yet kind of full-circle and fun at the same time.

I had always been your typical four year fan when it came to gymnastics, but for some reason in 2011, during the leadup to the London Olympics, I became obsessed with it. As a huge fan of college football and basketball at the time, it was easy for me to become fixated on collegiate gymnastics too. I grew up in the same town as Illinois State, so I began going to as many Redbird meets as possible, and did the same with Hawkeye meets when I went to school at Iowa. Getting to experience the atmosphere of a gymnastics meet is unmatched, so my obsession continues today and will live on long into the future.

My mother is from Atlanta, and most of her family still lives in or around the area. At some point in the mid-’90s while watching TV in my grandparents’ basement, I stumbled upon a Georgia home meet. Having only watched elite (and mostly Soviet era elite at that), I found the whole thing a little confusing and chaotic, but since gymnastics broadcasts were few and far between, I wasn’t complaining! Plus, Mom and several other family members went to Georgia, so I felt personally invested in the Gymdogs’ success. I have to confess, once Karin Lichey graduated and Andree Pickens became Queen of the SEC, I shifted my allegiance to the Crimson Tide (neither my Georgia nor Clemson-loving family were amused).

My viewership dropped off when I went to college, but I became reinvested a few years ago after my husband and I upgraded our cable subscription and I realized I could access ALL the NCAA gymnastics meet broadcasts—not just SEC! My second time around, I’m just a fan of fabulous gymnastics regardless of conference or college, so getting to cover these athletes and teams is an absolute pleasure!

My love for gymnastics started after I watched the Magnificent Seven win team gold at the 1996 Olympics. I can’t even hear “The Devil Went Down to Georgia” without smiling and remembering how cool it was to watch them win. For the most part I remained an elite/four-year fan until 2012 when I started wondering what happened to some of my favorite gymnasts after the Olympics. I had never really followed NCAA, with the exception of the Minnesota Gophers (since my cousin Megan competed for them in the early 2000s). That curiosity led me to follow Florida (thanks to Bridget Sloan), and from there I discovered the absolute joy of NCAA gym. Unlike many of my fellow editors, I never competed in gymnastics, but I absolutely love talking and learning about it, and I am so grateful to be part of the community that also loves this sport. Being able to contribute to NCAA gym coverage has been an absolute dream.