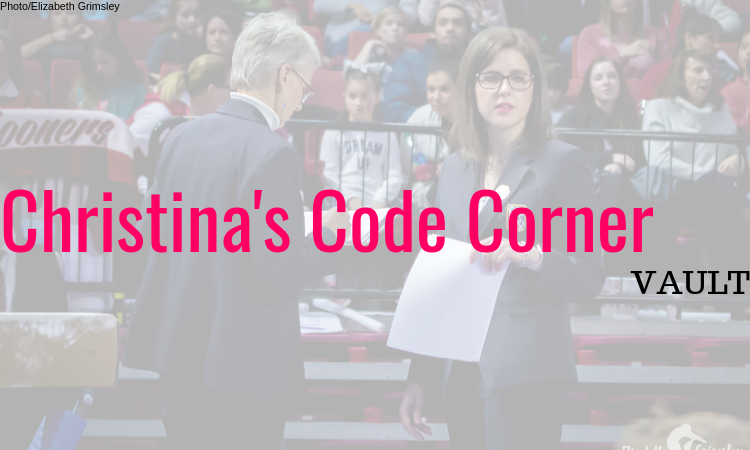 Are you feeling a gaping hole in your life since Worlds ended? Are you ready to fast-forward to NCAA season?

If you are anything like me, your brain has gotten very confused about the NCAA gymnastics code over the past few months because you’ve been mainly watching elite. In the meantime, the NCAA Women’s Gymnastics Committee updated the Code of Points for the upcoming 2020 season. There’s some good, some bad and some confusing things about the new code.

I have seen a lot of routines and code changes over my five seasons as a commentator for North Carolina gymnastics. Below, I share my thoughts on the 2020 code changes, what they mean for routine composition and my ideas of what I’d like to see in the future.

Over the next several weeks, I’ll be taking you through the changes to the code event-by-event (Olympic order, of course!) so you’ll be ready to do some sideline judging come January.

This series isn’t going to cover all the skills in the code; for a comprehensive list of skills, head over to the Balance Beam Situation!

Vault had the fewest changes to scoring, with only two vaults changing values.

Change 1: The Front handspring front pike-half has been changed to a 10.0 start value.

In case you’re wondering what the heck this type of vault is, it is from the same vault family as 2018 California graduate Arianna Robinson’s fan-favorite vault.

I’m not sure why the technical committee bothered including it. I’ve never seen someone perform that vault. Even Arianna’s “easier” front handspring front pike was rare, and that is also valued at a 10.0. I can’t imagine someone doing a vault from that family and thinking, “Yeah, this vault isn’t hard enough with just the front pike, I should twist it!”

You never know though, and I’d love for someone to prove me wrong.

My take: In general, I’m in favor of increasing the value of alternative Yurchenko entries, because we see so many Yurchenko fulls and one and a halfs. I am always a fan of encouraging different vaults. Plus, twisting onto the horse is really difficult and gymnasts should be rewarded for that.

We’re already seeing gymnasts react to that change; Claire Gagliardi from Ohio State is now training this vault, and it looks like it will be ready for January:

The 2020 code modifications are already making an impact! @OhioStateWGYM’s Claire Gagliardi is training a Y1/2 on front tuck, which was upgraded from a 9.9 to 9.95 SV. #NCAAgym pic.twitter.com/ZYk06AlQv7

What I wish they had changed: I’m sure this view will be controversial, but I don’t like the 9.95 start
values. That is true of the above half-on front tuck as well as the Yurchenko full.

I think doing a Yurchenko one and a half is a much more difficult jump than such a tiny margin. We already see some judges sort of accounting for this difference by letting deductions slide more easily on the one and a half. Instead of having it be arbitrary, let’s downgrade the Yurchenko full to a 9.90 and put the half-on tucked at a 10.0. It would encourage more gymnasts to try more difficult vaults even if they aren’t perfect.

Next week, wait until you hear what happened on bars. Everything changed. Well kind of. Not Really. Stay tuned!