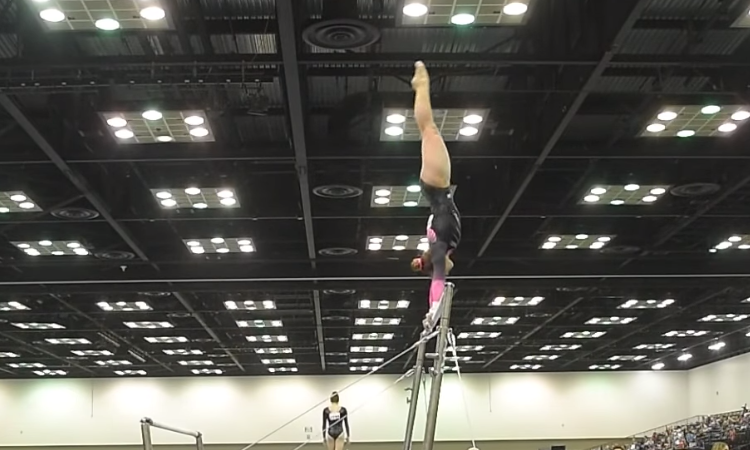 The most anticipated series is back! We looked at the data for each incoming J.O. freshmen on each event to see which gymnasts are at the top of their class on each event and in the all around. This week we’re looking at the top 10 bar routines for 2020.

Widner’s aggressive handstands should translate well into collegiate competition for the Cardinal. Her set is relatively clean and ends with a nice double layout dismount.

Her set isn’t the flashiest, but Wilson does end with a straight-as-a-pencil double layout. She keeps her legs together throughout but tends not to totally point her toes.

Her set has a pretty standard composition with a difficult full-in dismount. The Huskies will certainly welcome this bar routine in the lineup.

Rivers’ routine features a unique arrangement, including a Maloney + bail to handstand, a blind full + straddled Tkatchev and a double layout dismount. She has good form in a set that should translate well into collegiate competition.

Brusch’s set has relatively few built-in deductions with just a couple tiny feet crosses or leg separation. She, too, does the increasingly common Maloney + bail to handstand combination and dismounts with a floaty double layout.

Hoffman has a nice line to her routine with clean form throughout. Her set is already good and should only get better under the guidance of Tom Farden.

Johnson has great extension and beautiful lines throughout her routine. Her clean and precise set should translate well into college competition.

Doggette’s set is clean and dynamic. Her straddled Tkatchev is the focal point, and her double layout is up there with the best. The only big deduction in her routine is her leg separation on her Pak salto—which some judges don’t seem to take anyway.

We couldn’t find recent video of Joyner, but her time as an elite means she does have a variety of elements to choose from. Her leg form is iffy in areas, but her 2019 scores point to a solid set that Rutgers will appreciate.

The top performer’s set isn’t flashy until you see her gorgeous full-twisting double layout dismount—but it’s a good one. Brooks has precise, clean skills that should be a staple in Michigan’s lineup.