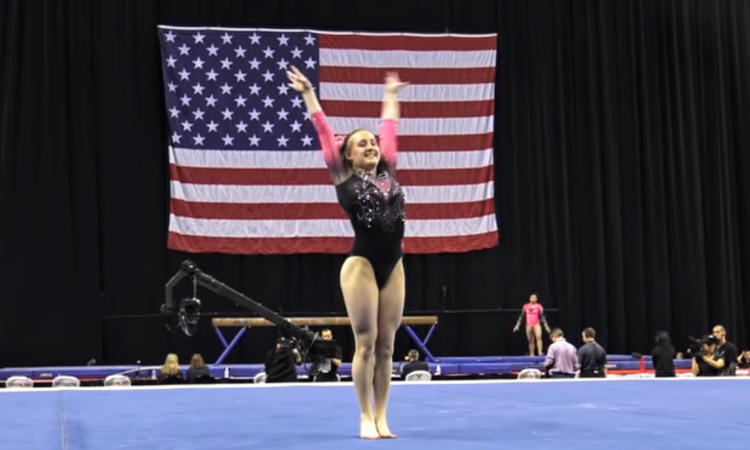 A longtime fixture atop the J.O. ranks, Kentucky freshman Raena Worley is one of the most anticipated recruits of 2019. A solid all around gymnast, Worley capped off her stellar J.O. career with a second place finish at this year’s national championship. Earlier in the season, she swept the all around and event titles at the Virginia state championships, a feat she nearly repeated at the Region 7 championships (she placed third on beam). Worley also impressed at the prestigious 2019 Nastia Liukin Cup, earning silver on vault and floor and fifth in the all around.

College gymnastics has been a long-time goal for Worley, and she committed shortly before her sophomore year of high school. The Christiansburg, Virginia, native says Kentucky’s nurturing environment made her feel at home. “The team is so supportive of each other and always encouraging each other to get better.”

Now, with the school year and training in full swing, Worley is quickly adjusting to her new normal. “The training atmosphere is different because it’s a lot louder! You can feel that everyone wants something,” Worley said.

The Wildcats are coming off a 2019 season that ended at regionals with a program best 197.600 en route to a ninth place overall ranking. After coming so close to making nationals (and saying goodbye to an exceptional senior class that included Alex Hyland and Sidney Dukes), Kentucky will be looking to build on last year’s successes. Worley feels she and the team are up to the challenge. “I am so excited to see what awesome things we’ll do this year!”

Unsurprisingly, she plans on competing all around and has her sights set high. One of her main goals is to be named SEC Freshman of the Year. Given her credentials and variety of skills—including a tucked full-in on floor, a Yurchenko one and a half and a piked front toss on beam—Worley certainly has the tools to accomplish that feat.

Notably, she frames her personal goals in the context of helping her team reach new heights. “Everyone in that gym is working towards helping the team win a national championship. That kind of drive and spirit is so incredible to workout in, and I am so blessed to have the chance to do it.”