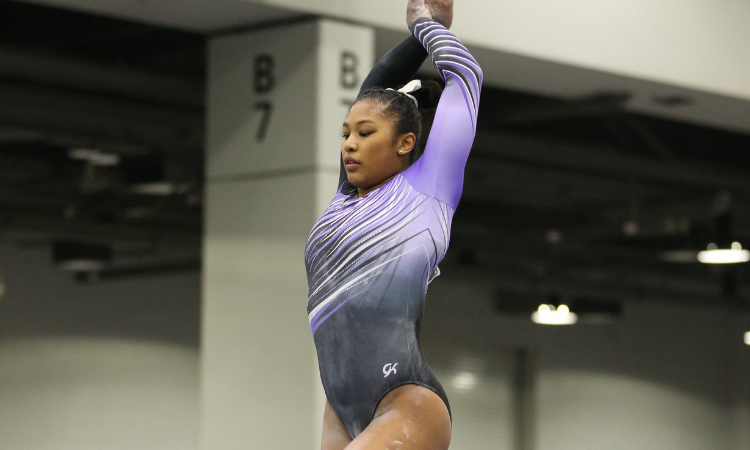 AK Subject, a level 10 from Twin City Twisters in Champlin, Minnesota, is signed on to start her NCAA career at Denver this fall. She is a strong all around athlete, fully capable of contributing on all four events for the Pioneers. She had a successful 2019 J.O. national championships, where she was named to the national team after tying for fourth in the all around, tied for sixth on floor, tied for seventh on vault and placed ninth on bars.

We had the chance to talk to her about her career highlights, what it was like seeing her club teammates succeed in college and her goals to help continue Denver’s improvement on the national stage.

College Gym News: What drew you to Denver? What are some of your long term goals for competing for the Pioneers?

AK Subject: The University of Denver has such a beautiful campus, and Colorado is such a fun state with so many things to do. The coaches and the girls on the team made me feel so loved, and Denver just felt like home. What really caught my attention was the emphasis they put on the character of the athletes that they bring onto their team. The philosophy is to build a championship tradition with a foundation of character, teamwork and excellence. I’ve had an amazing summer here in Denver, and we all get along very well because the team shares the same core values.

Another thing that drew me to Denver was the ability to take a program to the next level. When I committed, I knew that with the potential of commits going to Denver there was an opportunity to make history and achieve big things. A personal goal I have is to earn a first team All-American honor. As a team, I want to break all of the school records that are currently in place. But the biggest goal I have is to win a national championship with my team. Denver gymnastics is only going to get better, and I believe we have the potential to reach that goal.

CGN: Twin City Twisters has produced some incredible elite and NCAA athletes over the last few years. What was it like training there?

AS: Training at Twin City Twisters was truly a wonderful experience. We were able to have fun and enjoy gymnastics while still working very hard. One of the greatest things about the program at TCT is the emphasis on becoming a good person. Without the leadership and direction from [owner and head coach] Mike Hunger and all of the other coaches, I don’t know if I would even be half the person I am today. I will forever be thankful for the life lessons they taught me and the knowledge they brought upon me.

When being a good person is a core value, it naturally creates a positive and inclusive environment. The coaches don’t believe in having girls train 30 plus hours per week, but that didn’t mean we would get less done. We were taught that longer hours don’t necessarily correlate to higher levels of productivity. That being said, we were expected to always be moving and give our full effort. When you are focused and getting in lots of numbers, success is sure to follow.

As you said Twin City Twisters has produced so many incredible elite and NCAA athletes over the years. Having girls like that to look up to and push you to be a better athlete was so valuable. The TCT family is truly something special, and I will be forever grateful for the 16 years I had at the club.

CGN: Did any of your former club teammates’ collegiate choices influence what schools you were considering?

AS: They definitely influenced what schools I was considering when I was going through the recruiting process. Maddie Karr was the one who told me about Denver and how amazing it was there. She made Denver sound pretty great, so I decided to go to Denver gymnastics camp with her in the summer after eighth grade so I could get to know the coaches and the area. I bonded with the other commits that were at camp and fell in love with the campus and all the program had to offer.

In December of my freshman year, I committed to my dream school. I was so lucky to have teammates who could guide me through the recruiting process and give me insight into many different NCAA programs.

CGN: Denver had an absolutely incredible season last year. How did it feel to watch its success knowing you’d be joining the team in the fall?

AS: Seeing the team break so many records and achieve the things they did this past season was so heartwarming and fun to watch. I am pretty competitive, so Denver ending fourth in the nation only made me more excited to be a part of the team. It’s hard to believe how quickly this team rose, and I want to do all that I can to help the team continue on this path of success. Seeing Denver gymnastics in the NCAA finals only gave me more motivation to keep pushing myself. I am so ready to continue building the legacy.

CGN: What was your experience like competing at the Nastia Liukin Cup? Did you like competing on podium? How did that stage compare to J.O. nationals?

AS: I had an amazing experience competing at the Nastia Liukin Cup. My former teammate Abby Brenner and I decided that we wanted to truly enjoy the meet and take it all in. Everyone in our rotation was cheering for each other, and I just remember having so much fun during the meet.

This was my first time competing on podium, and I really liked it—I mean who doesn’t like a little extra power?! The Nastia Liukin Cup and J.O. nationals are both highly competitive meets. The Nastia Liukin Cup is interesting because there are only two age groups: junior and senior. This makes it even more competitive in my opinion because many of the girls who were in the same age division at the Nastia Liukin Cup are in different age groups at nationals. When you combine so many ages, it’s anyone’s game. J.O. nationals is a little more intense, but I love the competitive energy. Every gymnast is focusing on every little tenth, and by this time everyone is at their peak performance. I would say that the biggest difference is the type of energy in the air: more fun versus extremely competitive. I feel so honored to have competed in both of these competitions.

CGN: What changes are you most looking forward to from competing at the club level to competing in collegiate gymnastics?

AS: I can’t wait to experience the whole team effort aspect of competing. At the J.O. level, competing is more about about how you do as an individual and college is all about the success of the team. I can’t wait to represent something bigger than myself. I am super excited to compete in front of all the Denver gymnastics fans as well!

AS: Not really! I just like to stay loose and not focus too much on how people around me are performing. Doing this keeps me balanced and helps me get me ready to do my routines to the best of my ability. Another thing is I like to visualize my routines and skills before I go to give me an extra boost of assurance.

AS: My biggest setback as an athlete has been dealing with injuries. Injuries are very prevalent in gymnastics, so I had to learn how to keep my body healthy. Learning when I could push through pain and when I needed to stop wasn’t easy, and I was better able to understand my body as I got older. Eating the right food and having the right kind of strength helped me avoid major injuries as I went through the J.O. program.

AS: I am most proud of my fourth-place finish in the all around at J.O. nationals this past season. One of my biggest goals in my gymnastics career was to make the J.O. national team. Accomplishing this goal was such a dream, and it was a testament that hard work always pays off in the end.