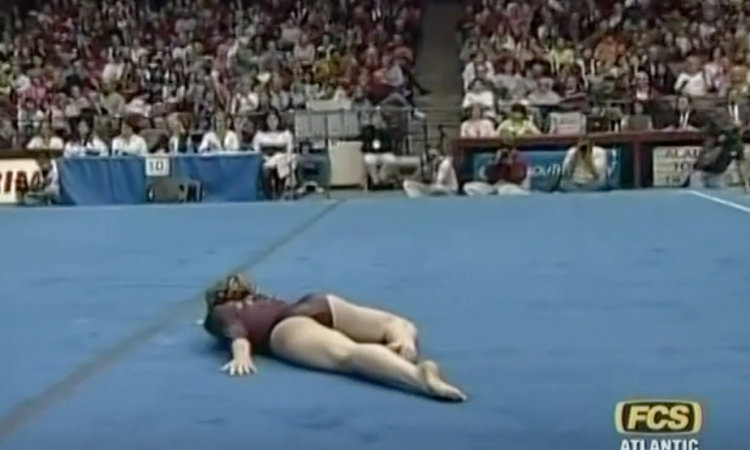 The legends themselves. We’ve done a Georgia/Alabama meet before, but that was when the mega-class led by Courtney Kupets was ready to ride off into the sunset. Tonight, we’re throwing it back to one of that classes’ first competitions, a rivalry meet that should get very real very quickly. And it does, with the gymnasts apparently running out of a burning building to get to the meet.

Joy. We have what appears to be a lone Straight White Man™ covering the meet, so there’s really nothing that could go wrong here.

Lori Strong-Ballard, Canadian Olympian and former Georgia gymnast, will be joining the broadcast alongside some unknown individual on the right.

Suzanne says bars will be the key for Georgia tonight, describing it as “sometimes awesome and sometimes we have problems.” She basically just described my entire life up to this point.

Some stacked rosters on both sides tonight, with world medalists Kupets and Katie Heenan competing for Georgia, and Ashley Miles and Terin Humphrey for Alabama.

Okay, cute…bit simple for my liking but it’s a nice color.

Not as big of a fan of this one. I like the Georgia band, but the black material looks a little like a leather trash bag

Btw, is it me or is Kelsey Ericksen a dead ringer for Missy Reinstadtler from Utah? Her bars totally add to the resemblance.

Huge release. Jay Clark (yes, THAT Jay Clark) looks like he has to crouch to miss her on the downward swing.

Shoutout to the Georgia section for making the trek to Tuscaloosa, including the man in the front who’s serving local grocery store employee vibes with that red sweater vest.

Lori admires the fact that Miss Courtney’s body remains “squeezed” throughout the whole routine. I don’t love the imagery.

I DO love Ashley Miles’s confident little clap before she goes to vault. And the vault itself, of course.

The hop on the landing is the “only thing preventing it from getting a 10.” Get ready, Lori; in a few years, there’s gonna be a lot more things than that preventing FTY’s from getting 10s.

We see a newly made-up Suze wearing the crown jewels, fresh from the Tower of London. Re: bars, she says: “We don’t think the scoring reflects how we actually did.” In other words:

But fear not, Suzanne: your team just casually opened with an Omelianchik from Ashley Kupets.

You’re excused for not knowing Courtney had a sister who looks exactly like her.

Another queen named Ashley has an unfortunate, Nastia-esque mishap on bars. She destroys the ending with a stuck DLO.

I learned two things from Courtney’s post-vault celebration: 1) the Georgia vault coach is also the science teacher from Stranger Things, and 2) Suzanne is the reason parachute pants are back now.

I don’t really see the point of this sign on the competition floor. The print is too small for anyone in the stands to read, and it’s not like anyone on the floor is going to read it either…?

Seeing Sarah’s top from the back, I’m realizing my earlier characterization of it as a “prom” look was unfair. In reality, this is giving me early 2000s VMAs vibes.

Georgia freshman Tiffany Tolnay with the only Y1.5 of the meet. Solid.

Terin Humphrey’s killing it on bars, but the real story here is a pre-“you are beautiful you are lovely” Dana in the background giving a pep talk that almost certainly included an early version of that iconic phrase.

This meet consists of almost all DLO dismounts on bars, and when they’re done this well, I understand why.

I’m mostly excited because we get to see floor routines next. But until then…

An elusive gainer one-arm BHS from Brittany Magee. Super fun. She followed that with a wolf jump, punch front AND double back dismount. Clearly these teams didn’t mess around with their leadoff routines.

Bikes on the competition floor means Alabama was supporting clean transportation before it was cool, right?

Honestly, this would cause me to lose balance more than any acro skill.

I’ve seen some sideline choreo in my (limited) days covering meets, but I haven’t seen it this cohesive since the “Rhythm Nation” music video.

That rotation gave us a limited number of broadcasted routines, so we’re just going to have to accept that the very tight score of Georgia 147.425-Alabama 147.375 is legitimate and correct. This is college gymnastics, so I don’t have a reason to believe otherwise.

This combo gives me Peng vibes.

If someone tried to film me from this angle, I’d get slap-happy real quick. Katie looks good, but she’s probably one of five people who can pull it off…

More difficulty from Magee to open floor for Bama.

Quick soapbox moment re: my earlier point. I wish more teams started out with really hard routines like those of Magee. I get the need to build scores, but I honestly think opening with such an exclamation point could have a similar effect. Wish it happened more.

I don’t always subscribe to the “falls are an excuse for comedy” school of thought, but when I do…

Make every mistake in your life look that fly. I dare you.

There’s nine minutes left in the meet and we’re getting all around performance recaps, so this is basically my mood rn.

The fact that the commentators are gushing so hard over this routine meeting the 9.900 threshold tells you how tight scoring’s been. The glory days.

To the surprise of no one, Ashley Miles popped off, starting with a huge DLO and ending with a 9.950 for her efforts.

As Sarah graciously (for real!) admits defeat, I offer you one last bold interpretation of her outfit: church mom feeling bold enough to wear her new halter top to Easter service and hopefully catch a few eyes.