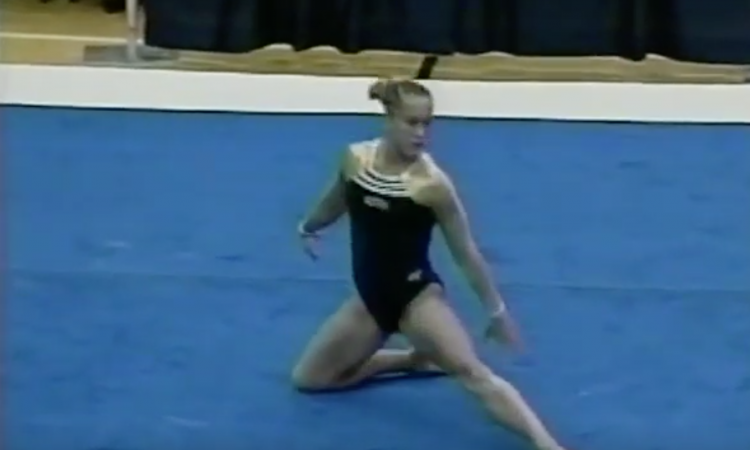 Alisha Robinson competed for Missouri from 2002 to 2005. During that time, she competed as an individual at nationals three times and was a two-time All-American. She is the school record holder on every event but beam. In 2014, she was inducted into the Missouri Athletics Hall of Fame. Robinson also competed as a power tumbler and was a national champion. She is now a coach at Xtreme Gymnastics in Lee’s Summit, Missouri.

College Gym News: You trained as a gymnast at GAGE. How did you decide to continue the sport in college, and how did you choose Missouri?

Alisa Robinson: My parents talked me into trying college gymnastics. They asked that I give them one year to see if I liked it; we all agreed they gave up so much for me that it was only fair that I give a year to see, and I ended up staying. I picked Missouri because it was close to home (only about an hour and a half away), and it felt right. Our coaches at the time were very caring.

CGN: How was your experience as a power tumbler, and what made you want to pursue it?

AR: I had been training at GAGE since I was around three years old. When I was a sophomore in high school, power tumbling became a bigger sport and [my coach] Al Fong introduced me to it. He thought it would be a good opportunity for me. Our practices for gymnastics would be from 3 to 7 p.m., and then a few days a week I would train tumbling after that. I went to world championships my junior year, trained only power tumbling in my senior year and then took a gap year to do the same, which is when I went to world championships again. By the time I got to Missouri, I hadn’t competed gymnastics in two and a half years!

CGN: How did you balance the two sports once you got to college?

AR: My coaches [at Missouri] had always been willing to let me take a year off before starting [college] to focus on power tumbling. I had initially planned on still competing power tumbling in the summers since that’s when most of the sport’s main events are held. However, I ended up feeling really at home at Missouri, and I no longer felt I had to fulfill that desire to keep up with the other sport. I wanted to stay on campus and focus on classes.

CGN: What was your proudest moment as a gymnast at Missouri?

AR: My proudest moment as a gymnast was making nationals several times as an individual all arounder. Competing as an individual was fun because it meant all my hard work paid off, but it was a little bit more stressful because I didn’t have my team with me. However, most of the teams were very nice and welcoming; I rotated with Georgia and BYU during my three years competing at nationals.

CGN: How did you decide to become a gymnastics coach after college?

AR: When I was in college, almost everyone took a fifth year of eligibility. A lot of girls would start their master’s degree or finish their bachelor’s. During my fifth year, I mostly stayed away from gymnastics because I felt that that time of my life was over. However, I started to really miss it, so I interviewed with gyms around the country to coach. I spent time coaching in Michigan and Illinois for a few years, and after a bad coaching experience, I wanted to be done again. I ended up moving back to Missouri and working at my mother’s daycare program, but that didn’t fulfill me like gymnastics did. One day, I got a text from one of the coaches at my current gym, who I’d known for several years from GAGE. It seemed like the sport kept drawing me back in.

CGN: What are some of the biggest changes you’ve noticed in the gymnastics environment?

AR: When I was growing up in the gym, things were always more quiet; there was less cheering and getting excited for your teammates. Now, even though it’s an individual sport, we still like to get the girls involved with cheering when their teammates are working. We really try to push the teammate bond since a coach can always motivate an athlete, but sometimes a teammate motivating you goes a little further. We like to have music playing too; we try to keep things upbeat.

CGN: How would you describe your approach to coaching?

AR: I’ve learned that coaching has to be driven by the athletes. As a coach, you have to learn how to motivate the athlete to “want it” a little bit more for themselves, rather than just doing it for other people.