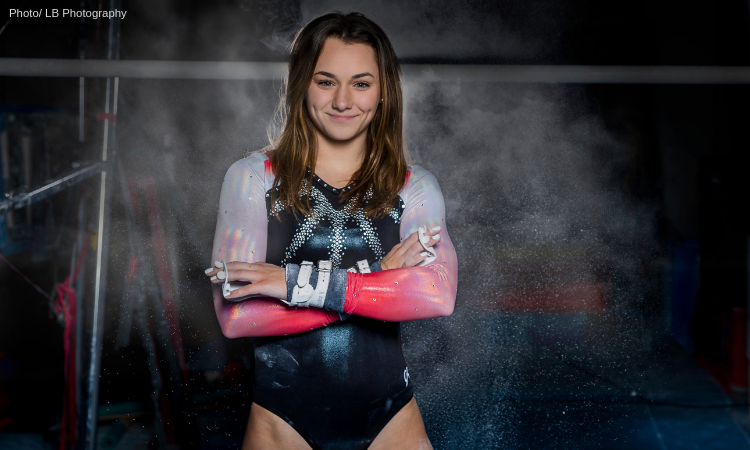 Hannah DeMers, a level 10 from Splitz gym in Canton Township, Michigan, is signed on to start her NCAA career at Central Michigan this fall. She is a strong all around athlete, fully capable of contributing on all events for the Chippewas. She had a successful 2019 J.O. national championships, where she was named to the national team after placing third in the all around, fourth on bars and sixth on vault and floor.

We had the chance to talk to her about her career highlights, how she was able to overcome nerves and self doubt to feel unstoppable in the gym and the awesome reason she looks up to Katelyn Ohashi.

College Gym News: What drew you to Central Michigan?

Hannah DeMers: It’s actually a good story. I was at a gymnastics camp in Florida called Golden City Camp with my coach Guy Swaka. I initially went to the camp so I could get some extra time to work on my skills (and to enjoy the Florida sun), but through there I met Christine MacDonald—she was the beam coach. During the camp, we worked so well together and we had such a fun time doing it. She is so kind and a fantastic coach. It’s just a bonus that Central Michigan has amazing facilities and people. Plus, it’s close to home, and I have family who are also studying at Central Michigan. It happened to be the perfect place for me to gain new skills and perfect my old ones!

CGN: What are some of your long term goals for competing for Central Michigan?

HD: My long term goal at Central Michigan is to walk out with four team MAC championships and four team appearances at NCAA regionals. My biggest wish is to have a winning team, but I hope I can contribute and compete all around.

CGN: What changes are you most looking forward to from competing at the club level to competing at collegiate gymnastics?

HD: The thing I am most looking forward to competing at the collegiate level is having a full team experience. I came from a relatively small gym and never really had a full team of girls to compete with. I am really excited to share experiences with these girls and have a fun time doing it.

HD: My biggest setback I had as an athlete was probably when I was unsure of my gymnastics and would let my nerves get in the way. I had this long period of time about two years ago where I wouldn’t trust myself and wouldn’t think I was good enough for this sport. Not to mention I would let my nerves get the best of me and would overthink and rush my skills on the competition floor. But just this last year, with the help of my amazing coaches, teammates and parents, I finally got over my trust issues with myself. I learned that I do better when I am not so hard on myself, to take things day by day and have the confidence to know that I can conquer anything thrown my way. Contrary to popular belief, gymnastics is all a mental game, and the best competitors have a tight mind and love for what they do. Once I fixed my head, I felt unstoppable.

CGN: Are there any skills you’d like to compete in college that you haven’t been able to put into your routines yet?

HD: There are a few skills that I have been working on that would be awesome to compete sometime in the next four years. I hope to compete my Yurchenko double full on vault, a double lay full-in dismount on bars, my front aerial backhand layout tri-series on beam and a full-in on floor.

HD: The accomplishment I am most proud of so far in my career is my bar routine at J.O. nationals in 2019. It was redemption from my bar set from 2018 when I peeled off the bar and gave myself a concussion on my last event. But I was able to overcome it and had the best routine of my life, which was also on my last event this year! It led me to place third at nationals and make the J.O. national team.

HD: One NCAA gymnast I really look up to is the one and only Katelyn Ohashi. I admire her ability to captivate the entire audience with her floor routine. Her gymnastics is so unique and she is one of a kind. Only she can moonwalk on the floor while dancing to Michael Jackson and Proud Mary. I also think that people overlook the fact that she competes with her hair down. Absolutely legendary.