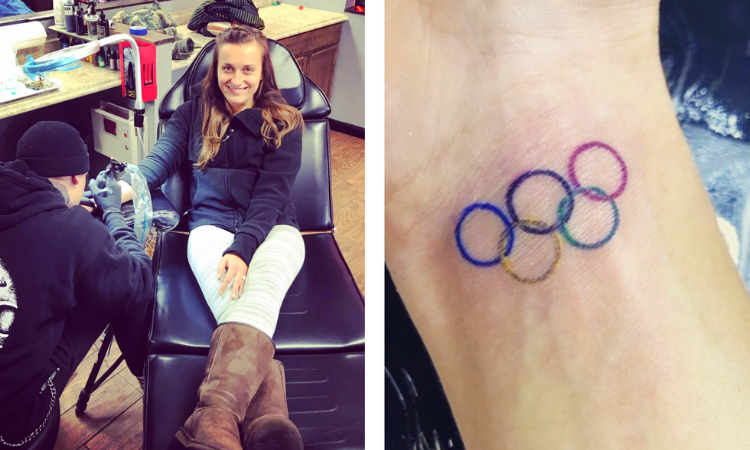 Daria Kiehne, nee Bijak, is a former standout gymnast at Utah from 2007-2010, making the 2008 German Olympic team after her sophomore year. She is also a two-time German national champion and is known for her unique skills on vault and floor. Here, she shares her Olympic story and why she waited so long to get a tattoo of the Olympic rings.

Five circles. Centuries of history. Decades of dedication & sacrifices. A moment of pride. To most Olympians this tattoo serves as a reminder of the hard work that went into reaching the biggest goal of their athletic career and therefore earning the right to be called an Olympian.

So, why didn’t I get the rings tattooed on my skin after competing in the 2008 Olympic Games in Beijing, China? Anyone who asked me heard me say “Oh it’s so cliché. Everybody [Olympian] gets one and I don’t want to be like everybody.” I TRULY believed this for a decade.

What exactly had I been dreaming of? It wasn’t of winning the Olympics. I knew I wasn’t that good. But I knew I could make it into the All-Around finals. I had always imagined that I would be  grinning from ear to ear post competition and celebrating with my teammates knowing that we had competed as best as we could.

This wasn’t just a dream. I had experienced exactly that when I ranked 16th at the World Championships in 2003 and again when I placed 8th in the World in 2005. It wasn’t a dream but  a memory that I wanted to experience one more time, only amplified by the fact that this was the biggest athletic stage in the world.

When I fell off the beam TWICE at the Olympics, my world stopped. I didn’t just fall. I crashed badly. My foot missed the beam completely and within a split second I landed face down on the mat, but not before hitting my quad on the beam, leaving me with a bruise that would stay there for 2 years. How could I not have felt that I was off? I was embarrassed that I fell so ungracefully and humiliated by the fact that I didn’t see it coming. ‘This is going to be the moment I will be remembered by’, I thought. This is NOT what I had dreamt off. The fact that I performed nearly flawlessly on the other three events didn’t even matter anymore.

I was also heart broken that I would never ever get the chance again to prove myself. To prove that I was good enough. To prove that I belonged. I keep wondering why I felt like I needed to prove anything. My 8th place at Worlds, which remains the best All-Around result of any German gymnast to this date since 1987 had already done that. But somehow I felt the burden to prove that I belonged on the Olympic team. I had to prove it not only to others but to myself as well. And falling twice felt like a confirmation that I shouldn’t have been on the team in the first place.

To explain this, I have to back up a little bit. At the end of 2003, right after the World Championships, I tore my Achilles tendon. With only a few months left before Olympic trials, I knew I wasn’t going to make a full recovery to have a shot at competing. At the age of 18, which is often considered the peak of a gymnast’s career, I wasn’t sure I would be able to stay at this competitive level for another Olympic cycle.

So in 2006, I accepted a gymnastics scholarship at the University of Utah. Even though I was still competing internationally for Germany, starting college gymnastics was signaling to everyone that I was nearing the end of my elite career. Additionally, I skipped the 2007 World Championships to give my body a chance to heal after undergoing two knee surgeries in 2006. So, after being absent from the German National team for a year and a half, it was a surprise to many that I decided to try out for the Olympics.

The qualification process for the Olympics was twofold, including trials and German Championships, with Championships weighing much heavier into the final decision. The top three finishers at the Championships automatically qualified for the Olympic team and an additional three gymnasts were nominated by a committee of coaches and officials.

At trials, I hyper extended my knees on the first event and couldn’t finish the competition. I was so frustrated with myself because now everything would be riding on my performance at Championships. And even if I competed as well as I could at Championships, I knew that trials could serve as a tie breaker in favor of a rival who competed in both.

At Championships two weeks later, I  had a solid performance and placed 4th. With only a couple tenths of a point behind the 3rd place, I just barely didn’t qualify automatically. Three spots were left and four gymnasts had a true shot at qualifying. Two of the remaining candidates were considered specialists at a specific event and the team desperately depended on their high scores to hopefully qualify for the team finals, which left me and one other girl vying for the last spot on the team. I placed 4th and she placed 5th at German Championships. Head to head, I knew I was better. But I also knew I had missed one additional opportunity to prove so beyond any doubt.

I never found out how exactly the committee made their decision to select me but I knew I had worked hard for it and I was grateful for the opportunity to represent my country. However, I couldn’t help but hear the chatter behind my back… that the decision wasn’t fair because I hadn’t competed in all four events at trials… and it wasn’t fair because I hadn’t competed for Germany in over a year. And so… I started questioning whether I truly belonged on the team.

When I fell at the Olympics, I felt like everyone who didn’t believe in me received confirmation that I shouldn’t have been on the team after all. The fact that the entire team had a horrible day and four out of the six of us fell multiple times on multiple events didn’t matter to me. I didn’t question their spot on the team. I just questioned mine.

I never spoke to anyone about what was going on inside of me. Not my coaches, not my teammates, not my family, not my friends. When I got back home, everyone outside of the Olympic bubble acted like I had just reached the biggest goal of my life. Everyone wanted to talk about how amazing it was that I competed in the Olympics but all I wanted to do is forget that it ever happened, which led everyone to believe that I was very humble when if fact I was just very embarrassed.

I’ve done a lot of work on myself, especially in the last three years. I’ve been processing many of my experiences in athletics as well as outside the gym and ten years later, I am finally starting to be proud of being an Olympian. While it is still a work in progress, I’ve started accepting that things don’t always go as planned. And just because I did not compete the way I knew I could on any other day, doesn’t mean that I didn’t deserve to be there. Just because I did not compete the way I wish I had, doesn’t mean that I can’t be proud of doing the best I could in that moment. I am finally comfortable talking about how the Olympics were both – the biggest achievement of my life and one of the most difficult moments of my life.

This essay was originally posted on Daria Kiehne’s blog, Love Over Fear – Always