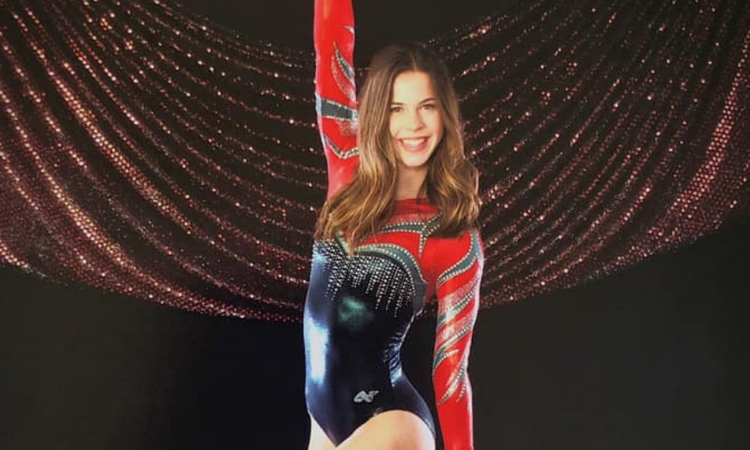 Payton Murphy, a level 10 from Palmers gym in Bloomfield, Illinois, is signed on to start her NCAA career at Western Michigan this fall. She is a 2019 J.O. national qualifier, where she tied for third on floor, placed sixth in the all around, eighth on vault and 12th on bars. Murphy is a strong all around athlete that the Broncos will look to have contribute on all four events. Originally a UIC commit, Murphy has had a unique path to beginning her collegiate gymnastics career.

We had the chance to talk to her about some career highlights, what it was like when she found out UIC cut its gymnastics program and what she learned from the injury that almost made her leave the sport for good.

College Gym News: What are some of your long term goals for competing for Western Michigan?

Payton Murphy: While at Western Michigan I have many individual goals, but they all tie together to help the team find success at each competition. As an individual, my goal is to compete all around for Western Michigan. I want to do the most I can on each event to help our team come out on top at the MAC Championship. Along with that, I would also like to be able to compete at NCAA regionals, hopefully with my team by my side. Stepping out of the competitive side of gymnastics, an important goal of mine is to leave my mark on Western Michigan gymnastics. That could mean being a supportive teammate in and outside of the gym or being a leader that underclassmen can look to for advice.

CGN: What are you most looking forward to when it comes to competing in collegiate gymnastics? Are there any changes specifically from competing at the club level that you are either excited or nervous about?

PM: When asking former and current collegiate gymnasts how the transition was from club, the response I get every time is, “It is very different.” That statement makes me a bit nervous but definitely excited to see what the future holds.

At my club gym, I competed all six of my level 10 years either by myself or with one teammate. Because I’ve had such a small group at most competitions, I am most excited for not only having a whole team supporting me but also being able to cheer on all of my teammates. The level of enthusiasm at collegiate gymnastics competitions is second to none.

I am most nervous about the transition of a student athlete. I am interested to see how the balance of classes, practice and competition works out. In general, I cannot wait until the time comes where I can be with my team and feel the energy on the competition floor first hand.

PM: I am not the most superstitious person, so I don’t have many rituals. One thing is that I can’t look in my grip bag after I have left the gym before a meet. When I look in it, I get too nervous about the upcoming competition. Also, I frequently talk to myself, either in my head or out loud. Before or during a routine I like to calm myself down by saying positive and uplifting things. I do this mostly at competitions but sometimes it happens during stressful times at practice.

CGN: You were originally committed to UIC. Do you remember where you were when you heard the news that their program was eliminated? How did you find out, and what were your initial thoughts?

PM: I remember being in my last period of school for the day when my mom texted me, “Can you meet with me before you go to practice today?” I thought the text seemed a bit suspicious, but I wasn’t nervous about anything. When I met her before my practice, she had an unexplainable look in her eyes that told me something was wrong. She then explained to me that Peter Jansson had called her to deliver the sad news, which he had also just found out hours before. My initial thoughts were how the girls on the team were taking this news. I alone was in tears, but I couldn’t imagine how the girls, whom I had already considered teammates, were taking this shocking news. A few hours later, after I was able to calm down a bit, I called Peter nervously. I would not have wanted to talk to anyone else is that situation than him. He was able to keep me positive but tell me the facts all at the same time. He explained how they were going to do whatever they can to keep the program open but also would help me where they can. Peter and [co-head coach] Mary [Jansson] are more than just special, they are like nobody I have met before. Although I never got the chance to compete as their gymnast, I am still very close with them. I wish the best for both of them and the UIC gymnastics family.

CGN: What drew you to Western Michigan? Was it a school you were initially considering?

PM: There are a lot of things about Western Michigan that I immediately fell in love with. When I first got on campus, I felt at home. I think the campus of Western Michigan is what drew me in initially. I had been in contact with [head coach] Penny [Jernigan] and [assistant coach] Al [Scharns] for a while, and I always saw myself at Western Michigan. Before I had made my initial commitment it took awhile for me to make a decision between UIC and Western Michigan. Although things didn’t work out with UIC, I was grateful that Western Michigan was willing to take me in. I am counting down the days until I can compete as a Bronco!

PM: Going into my freshman year of high school, I found out I had two stress fractures in my back. After being out for about six months, returning to gymnastics was the biggest setback I had. I began to fear everything that I could once do. I wouldn’t go for skills that would be a breeze for me. Fear took over my mind and almost led me to drop the sport for good. With the help of very patient coaches and family, I finally overcame my issues. This is about when I started to speak to myself as a ritual. Your mind is a big part of gymnastics, so I just needed to find a way to control it.

PM: My older brother attended Michigan as an athlete, so I would always be interested in their gymnastics team. This led me to look up to Olivia Karas. I thought it was amazing after her injury when she had such a positive outlook about life. She was always there supporting her teammates at every meet even though she couldn’t compete. When it was her turn to come back, she killed it, making her best year a good one. She is a great role model and defines the type of college gymnast I aspire to be.

PM: The accomplishment that I am most proud of is making it to J.O. nationals three times. Competing for Region 5 was always an experience I had dreamed of being apart of. Competing with Region 5 is like no other. I have had so many new relationships with all the gymnasts and coaches around the nation. Because of Region 5, I am even more excited for collegiate gymnastics and seeing all my friends at each meet.