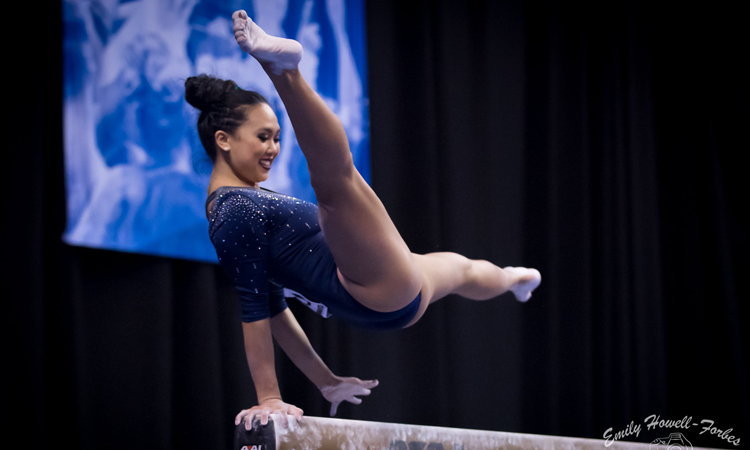 This meet came down to the wire! It gave Oklahoma its first national title, but not without a twist (spoiler!): The Sooners finished tied for first place. It’s excitement to the max.

Not only is this the last championship under the Super Six format, but it was an exciting one at that. UCLA’s Peng Peng Lee even went out in the best possible way, scoring not one but two perfect 10s to help UCLA to the title.

Auburn and Alabama have an intense rivalry. Before this, Alabama hadn’t lost a meet to its rival, but Auburn finally took home the W by the narrowest of margins in an exciting dual meet.

Another team joined the championship club at this meet, with Florida taking its first title.

It didn’t take long for Oklahoma to get its first solo title. The Sooners capped off this exciting meet and sealed the deal with a lights-out vault rotation that no one watching will forget.

Ah, the final meeting of Sarah Patterson and Suzanne Yoculan. That’s something you’ll want to watch again and again.

Yoculan’s Georgia team went out on top as a final send-off into retirement for the legendary coach and the last meet for Courtney Kupets’ storied career.

If 2004 isn’t enough to lure you in, this was a competitive meet that saw Stanford and UCLA battle it out for the conference championship. Also catch a glimpse of an Arizona State team in its glory days—the 2019 team was the best result the Sun Devils saw since 2004.

Before KJ Kindler led Oklahoma to its first national title, she coached Iowa State through some of its best seasons, eventually leading to qualifying to the Super Six in 2006.

Before Oklahoma dominated the conference, Big 12s were a bit more interesting. Take a look at the teams in this meet, too: The Big 12 has seen the most changes in recent years with Missouri and Nebraska both departing for other conferences and Denver joining from the MRGC since.

Remember how Nebraska was in the Big 12? Current Nebraska head coach Heather Brink competed for the Huskers in college, including the 2000 season. On top of that, this meet featured an upset: Iowa State upset Nebraska for the conference title.

We couldn’t find full video of this meet, but it’s too legendary not to include. From Stanford’s crazy hairdos to Samantha Peszek throwing a standing full on beam, it’s a meet that shouldn’t be forgotten. Lucky for you, we were able to find video of Peszek’s beam routine and Elizabeth Price’s bars set.