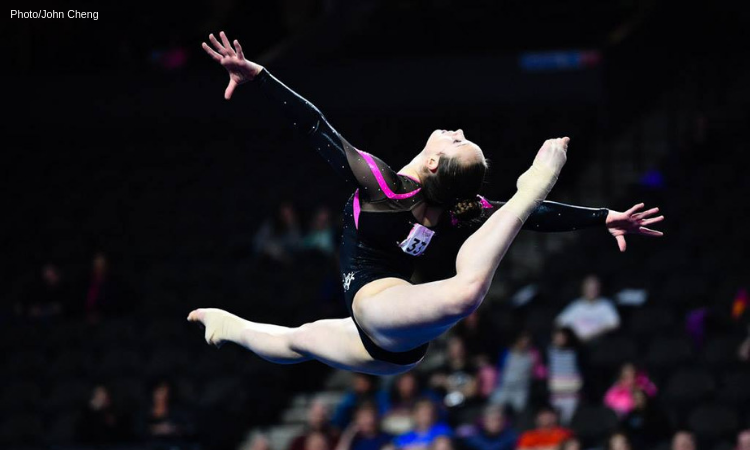 Chloe Widner, a longtime level 10 from Texas Dreams under Kim Zmeskal Burdette and Chris Burdette, is signed on to start her NCAA career at Stanford this fall.  She is a 2019 J.O. national champion in the all around, beam and floor exercise and also placed second on vault and tied for fourth on uneven bars. In 2018 she competed at the Nastia Liukin Cup, coming in first on floor exercise and fifth on vault. In addition to being a strong all around athlete that the Cardinal will be able to depend on for any event, Widner is a particularly stunning beam worker.

We had the chance to talk to her about some career highlights, what made her switch her commitment from Arizona to Stanford and the gymnast that inspired her to consider competing in collegiate gymnastics in the first place.

College Gym News: You were originally committed to Arizona. What made you decide to switch to Stanford?

Chloe Widner: The common denominator between Arizona and Stanford is Tabitha Yim. I loved the culture she created during her time at Arizona, and the opportunity to be coached by her was the motivating factor in my decision to pursue Stanford. I am really grateful to Arizona for making the transition a very positive experience.

CGN: How did pursuing Stanford differ from the other schools you were considering? How did you keep up such strong academics while simultaneously competing at such a high level?

CW: Pursuing Stanford was very different than any other school because you have to get accepted before you can commit. It was definitely stressful trying to keep up with AP classes while maintaining my gymnastics level, but I had all the support I needed from my coaches, parents and teachers. Junior year was packed for me, adding many AP classes, studying for and taking the ACT, and still competing, but I was determined to get into Stanford and was willing to do whatever I could to better my chances of getting accepted.

CGN: What changes are you most looking forward to from competing at the club level to competing in collegiate gymnastics?

CW: I am very excited for the switch to the team aspect of collegiate gymnastics. I can’t wait to support and cheer on my teammates at meets and hopefully help them to multiple victories.

CGN: What was your experience like competing at the Nastia Liukin Cup? Did you like competing on podium? How did that stage compare to J.O. nationals?

CW: The Nastia Liukin Cup was such a great experience. Everybody was so supportive of each other, and we were all having lots of fun. This is [one of] the only J.O. competition on podium, so it was pretty different, but it made the competition that much more exciting. Competing at the Nastia Cup was a great honor and so was J.O. nationals. At nationals it was so much fun to be able to compete on a team for Region 3 rather than just individually. It’s an honor to have been able to compete at both meets, and they are both very different.

CGN: You moved gyms in 2012 to train at Texas Dreams. What is it like training with Kim? What inspired the switch?

CW: I made the move to Texas Dreams after a successful level 7 season. At my previous gym, there were only two optional athletes. My parents and I thought that training in a setting with a large optional team would help me to better develop as an athlete. Being able to train with Kim was one of the best things that could have happened to me. She has helped me grow both as a gymnast and as a person over the years. Kim helped me to find my full gymnastics potential, take ownership of my gymnastics and pushed me to be my very best. I cannot say enough positive things about my experience at Texas Dreams and with Kim.

CW: When I was younger I had multiple things that I did before competing. I used to wear the same leotard the practice before a competition, I had to eat pasta the night before and I always wore the same type of bun in my hair when competing. The older I get, the more I realize that superstitions don’t help as much as being prepared does.

CW: I’ve had some small, quirky injuries throughout the years that have come at some pretty inopportune times. One year, I was finally about to get my single bar release that I had been working to get “routine ready” for about two years, and I broke my finger. I obviously took some time off from bars because of the injury, but it was also too swollen to even put into my grip. I ended up going back to doing bars right before season started and didn’t have time to go back to working Tkachevs before having to figure out a routine. That was obviously frustrating, but it made me even more determined throughout that season and summer to be able to compete it the next season.

CW: For a long time, I did not want to do collegiate gymnastics. I never really watched it, so I didn’t fully understand it and just falsely labeled it as “glorified cheerleading.” The first collegiate gymnast that I remember watching was Chayse Capps. Watching her made me realize that collegiate gymnastics was actual gymnastics and that they weren’t just playing around like I had previously thought. I also look up to Elizabeth Price because she was able to continue to keep her high quality from elite throughout her entire NCAA career, and she was just amazing to watch.

CW: The thing that I’m most proud of from my career so far is my floor routine from nationals in 2018. Although it didn’t get the high score that I had wanted, I had been working throughout the season to be able to do both double layout and piked full-in in the same routine. While it was Kim’s idea, she didn’t force me to do it and she let me take the reins and tell her when I was feeling good enough to train the upgraded routine. It was the first time I really took ownership of my gymnastics, and Kim trusted me to only compete it if I truly felt prepared. Other than that, it was the best routine I had ever done, both at practice and competitions. I was very proud of that routine and the work that I put into it.

This not only was a proud moment for me, but it also helped me live the saying “I define my own success.” That saying is repeated and taught regularly at Texas Dreams. It basically means that success isn’t always reflected in a score, but in setting a goal, achieving it and not letting the scores/place define your success for you.