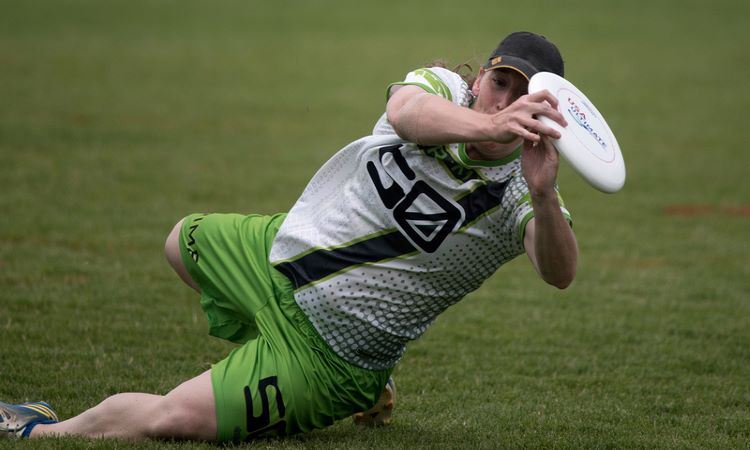 Whitney Morgan Kramer (Alabama ‘02) is a former Junior Olympic national team member who won an NCAA team championship with the Crimson Tide her senior year. In the years since, Kramer has evolved into a national-level ultimate frisbee player and physical therapist specializing in outpatient orthopedics.

Kramer was first introduced to ultimate in 2007 as a physical therapy graduate student at UNC. A classmate played for Raleigh’s Ring of Fire, one of the most venerable men’s club teams in U.S.A. Ultimate. “We had a weird schedule with a big gap between morning and afternoon classes,” Kramer said. “So in between classes he taught us how to play, and it just kind of stuck.”

Despite her decades of gymnastics training and athleticism, the new sport did not come naturally at first. “I had no field sense in the first few years,” Kramer said with a laugh. “There are so many variables you have to anticipate! Plus, I really struggled with the public learning curve. [It was] a really different thing coming from a sport that’s all about intrinsic motivation and striving for perfection to have to learn in front of so many people.”

Twelve years on, Kramer has not only learned to play ultimate but excels at it, even competing at the 2017 Mixed Masters National Championships. She’s primarily a defensive player and describes just how much she enjoys that element of field team sports. “I love getting [blocks] and creating turnovers, getting that momentum for my team. In gym, you go out and earn points, but that’s all you can do.”

She also notes how wildly the concept of “team” varies between the two sports. “In gymnastics, once you pick a club that’s your club,” she said. “It was even more intense in college because you’re also living as roommates and training together. In ultimate, things are much more fluid. Teams band and disband pretty quickly. The village is very different, so you have to work harder to develop those deep friendships.”

Kramer has fostered many close relationships in the ultimate community and even met her husband, Terry, through the sport. “We were both physical therapists in the [Raleigh-Durham] Triangle but never met until [Asheville Ultimate’s annual tournament] Ho Down,” she said. The couple currently play for the Mixed Masters—a coed division for men over 33 and women over 30—team, Carolina Reaper.

“The longevity in ultimate is great. It’s a sport you can still play and be competitive in during this chapter of your life,” Kramer said. “Except for Oksana [Chusovitina], that is not the case in gymnastics!”

Kramer also notes that another bonus to ultimate culture is being able to involve her children, Anna, 5, and Owen, 3. “My kids have been on an ultimate sideline since they were three months old. It’s a safe space for them, and some of their best friends are other ultimate kids; they love it.” Though she tried a “Mommy and Me” gymnastics class with then-toddler Anna, “It didn’t take. It wasn’t something she pressed, so it wasn’t something I pressed. Both kids know how to throw a disc, though, and Anna just did her first season of rec soccer.”

While Kramer is purely an ultimate player these days, she is still involved in gymnastics through her work as a physical therapist with Duke University. Unsurprisingly, approaching the sport as a healthcare provider has altered her perspective. “It’s changed a lot in the 37 years I’ve been involved. The magnitude, frequency and age we’re seeing injuries… Younger athletes are getting adult injuries; pediatric lower back injuries aren’t something you hear about unless you treat gymnasts. What can we do to prevent even one?”

Kramer administers triage and treatment twice a week at Superior Gymnastics Academy and Team Attraction Gymnastics, offers a monthly clinic at Morgan’s Gym, provides trainer coverage at meets hosted by those programs and gives concussion screenings. Her expertise as a therapist combined with her years of experience as a gymnast make her uniquely qualified to help her patients minimize their risk of injury while still reaching their gymnastics goals.

And they are reaching their goals. Nine years with the outreach program has allowed Kramer to watch numerous patients progress to the college stage. “It’s so amazing and exciting for them,” she said proudly. “Other than Bama and the other SEC teams, I root for wherever my former patients go.”