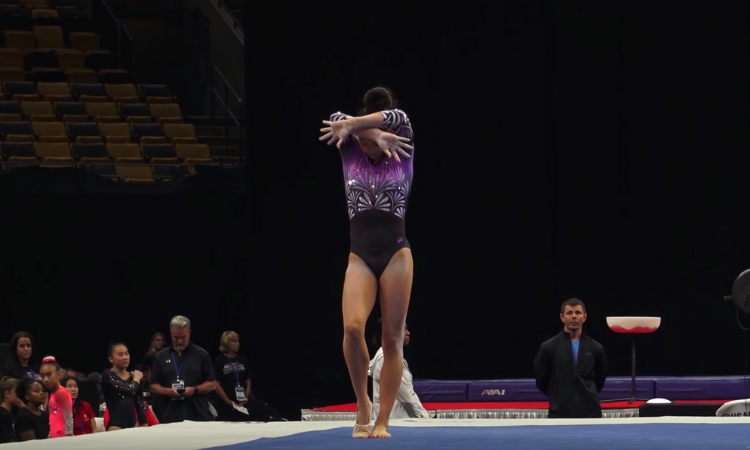 The inaugural junior world championships took wrapped up this weekend in Györ, Hungary. More than 35 countries participated, sending teams of three gymnasts born in 2004 or 2005.

Day one for the women saw the team and all around finals and event qualifications. The Russian team comprised of Viktoria Listunova, Vladislava Urazova and Elena Gerasimova dominated, winning gold in the team competition and each athlete qualifying to multiple event finals.

The three up, two count format greatly benefitted the Chinese team (Ou Yushan, Guan Chenchen and Wei Xiaoyuan) who capitalized on the U.S. team’s difficulties on beam to finish second by just over a tenth of a point. Romania, whose women’s gymnastics program has struggled in recent years, finished an impressive fourth.

Listunova and Urazova capped off Russian’s team victory by winning first and second in the all around while China’s Ou Yushan finished third. DiCello was the top U.S. competitor, qualifying to all four event finals and placing fourth all around.

On the first day of event finals, DiCello’s superb amplitude on both her Yurchenko full and double earned her the vault title and the U.S. team’s only gold medal of the competition. Great Britain’s Jennifer Gadirova stuck her Yurchenko one and a half en route to second place while Urazova’s difficulty helped her secure third. Barros, who was the top qualifier, faltered on the landing of her Yurchenko double when she tried to stick and finished fifth.

On uneven bars, the Russians again showed their dominance with Urazova and Listunova finishing first and second thanks to their high difficulty and exceptional execution. China’s Wei edged out Ou and Blakely by less than half a tenth for the bronze.

The beam final was one of the most competitive in recent memory with only six tenths of a point separating second and sixth place. Elena Gerasimova’s combination of difficulty and solid execution earned a massive 14.200 to win gold. Wei and DiCello both scored 13.733, but finished second and third respectively (Wei’s 8.333 E score won the tie-breaker over DiCello’s 8.033). U.S. High Performance Director Tom Forster noted in his post-meet recap on Facebook that the FIG plans to get rid of tie breakers for future junior world championships.

Execution proved to be the great equalizer during the floor final as well. Listunova’s near-flawless performance earned her a 14.166 and second individual title. Ou showed exceptional form on both her acro and dance elements to secure the silver over Gerasimova, whose dance and tumbling were impressive though lacking the precision of Listunova and Ou. Britain’s Gadirova had the lowest difficulty of the final but turned in a joyful, well-executed routine that earned her fourth place and secured her status as a fan favorite.