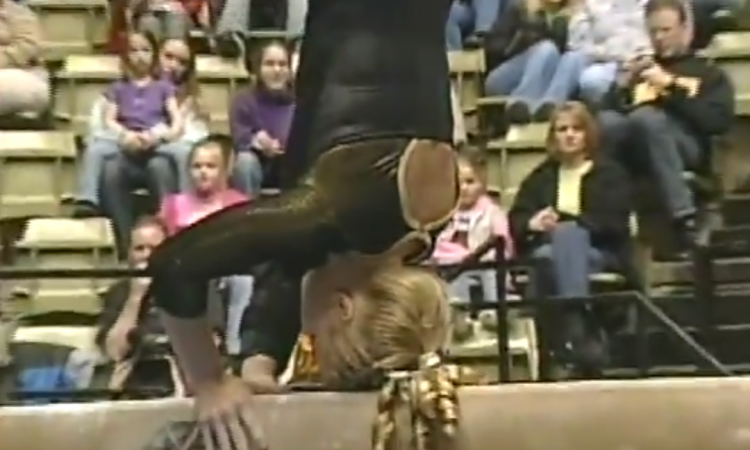 Yes, I did choose to recap this meet exclusively because of its weird name

The Callaway Bank seems to be a community financial institution based in Missouri, which is where this meet was held for 26 or 27 years (it’s ambiguous) before grinding to a halt in 2006. I have no idea what cats have to do with it, though.

Besides the fascinating name, the key point of the meet we’ll be reminiscing about today is that it is an event finals broadcast for a regular season quad meet. What? I know. What did mid-’00s people do to deserve all the event finals?

The team session took place on Friday, with Missouri registering a runaway win over Pittsburgh, Northern Illinois and Ball State. (What a weird set of teams.)

Is it just me, or does this feel a bit menacing?

Leotard time! Ball State bringing the “It Kind of Has Straps and That’s The Only Feature.” 6/10.

Oh, whoa. I thought this was going to be boring but right off the bat we’ve got a Cuervo.

“A little bit of leg separation during the… flipping portion of it.”

OK, I love black but even I’m bored.

Jodie Heinicka with the Tsuk full!

WHEEEEE. I love ones where they land already laughing.

This is a really fun old Pittsburgh leotard! Hey Pitt, you guys like throwbacks, right?

I made a GIF just of Whitney Crater’s salute because it’s absolutely iconic. I’m also obsessed with her hair. It’s so ‘50s except somehow it actually stays in place while she does gymnastics. Sorcery.

Finishing off the final with some white girl cornrows, because it’s 2006.

Or should I say, COMING UP…

Blind one and a half to Jaeger from Pitt!

Brief storytime about Perry because I googled her a bunch after watching this routine. She now owns a gym in Columbia that recently sent its first gymnast to NCAA; Adalayna Hufendiek is going to Missouri, just like her coach! Perry also had a very cute baby this week, so congratulations on that.

I really hate the term “double flyaway” so much.

An underappreciated consequence of score inflation is that I think it contributes to a reduction in routine diversity. Athletes at top programs can take a lot more risks when the baseline acceptable score is a 9.600 versus a 9.850. That said, even as a person who watches a fair amount of old NCAA bars, it’s still jarring to me how little handstands mattered before 2010 or so. Some of these are barely over 135 and everything is fine.

What am I doing? Screencap recaps aren’t about discourse. Back to fluff.

Back to Adrianne Perry, who is magnificent. She has an eponymous skill in the J.O. code. I’ve read about this but have never seen it.

She also does a two foot layout because she’d be bored otherwise.

Pitt’s Anya Chayka does this masterpiece of an acro series.

“Gymnastics is not a sport for the ages, shall we say, so to see someone have fun and really enjoy it at this stage in her career is a joy to watch.” Uhh, she’s a senior in college, not a grandma.

Lauren “Bunny” Schwartzman (yes, really) is ranked No. 1 in the country on beam, and we get this amazing close up of her ponytail.

She fell on her series!! What? Here’s a fun leap series instead.

Sarah Zigler had a bit of an oops.

This is freshie Alicia Hatcher. Someone should do a Barani step-out in 2020, this is seriously awesome.

Commentator won’t stop talking about how surprised she is that freshmen are already mature competitors. If you can’t be mature yet as a freshman, and you’re required to be miserable by senior year; your window to be good at college gymnastics is pretty short.

We had a fall on an attempted upgrade. I guess that’s a perk of having random event finals in February. It’s a good opportunity to try things without the pressure of the team event.

And that’s the end! I didn’t see a single cat all meet, I have to say. I just don’t understand. Missouri won everything and there was none for Northern Illinois bye.