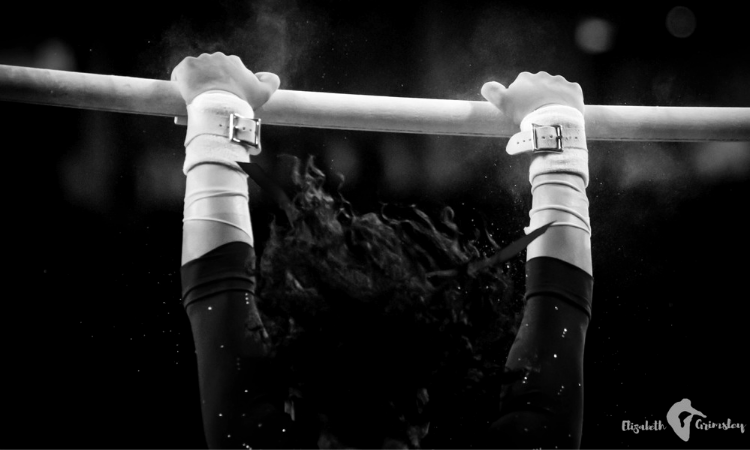 Shortly after this year’s national championships, a Wall Street Journal piece lauded gymnastics as the NCAA’s “feel-good sport.” Gymnasts gleefully cheer as though they’d won the lottery after each one of their teammate’s routines. Meets are thrilling and often unpredictable. There’s an entire event that consists largely of dancing. It’s true that it’s hard to feel anything but good watching a gymnastics meet, either NCAA or otherwise. Doesn’t that mean that, tangentially, those athletes who partake in the sport should also be making us feel good?

Recently, some prominent gymnasts have gotten into a bit of…questionable behavior outside the gym. Shortly after her retirement this spring, fan favorite Sarah Finnegan announced she’d be selling her Team USA leos to raise money to combat human trafficking through her family’s charity. But a deeper dive showed that the charity has ties to anti-abortion ideas. Around the same time, fans also questioned Ragan Smith’s apparent decision to advertise a pyramid scheme on her Instagram (yes, really).

These are just the latest in a long line of social faux pas exhibited by gymnasts over the years. It seems that in any institution with a fanbase there are those standard bearers of questionable conduct. These are our “problematic faves.” They’ve either said or done things that just didn’t sit well with a majority of fans, for either ethical, personal or moral reasons. I’m sure you didn’t just think of MyKayla Skinner, Gabby Douglas or Ashton Locklear, right? Either way, there’s been plenty. And often, when a gymnast behaves in such a way, it mars her record so that people just can’t seem to talk about her again without mentioning it, especially with the record-keeping capabilities of social media.

I get it—to an extent. Accountability is important. And even if I wouldn’t identify a gymnast’s conduct as problematic, I can’t fault people for disassociating from them because they felt it was. To do so would be along the lines of the “sorry you were offended” apologies we’ve seen too often for these sorts of issues. But I also don’t think it’s wrong for other people to continue supporting that gymnast or that they should have to apologize for doing so.

Why? For one—for any public figure—there has to exist a certain degree of separation between the creator and the work he creates. I might not want to watch Woody Allen’s films because of his personal conduct issues, but I wouldn’t take that right from others, and I recognize that his films have been critically acclaimed. The same goes for gymnasts. You may not agree with MyKayla Skinner’s past social media behavior, but it’s hard to ignore the difficulty she brings to the sport and that which she’s achieved in it.

Gymnasts in particular are on a stage in which their every move is broadcasted and tracked in painful detail. For many of them, gymnastics is the center of their world. They of all people deserve a little more slack since many of them have minimal exposure to the goings on of the world. Collegiate gymnasts and older might warrant a second look, but when it comes to younger gymnasts, discretion has to be used. A stray retweet or comment might not be reflective of who they are as a person, and there could be significant growth in their future.

Before you dismiss a gymnast, think about their conduct a little further. A coworker once gave me the cautionary advice to “attack the system, not the person.” In a world long governed by forces of oppression and marginalization, problematic behavior is often embedded in everyday life to the point of perceived normalcy. To that end, there’s not one person who’s never been guilty of saying or doing something they shouldn’t have (even those universally acclaimed gymnasts everyone seems to love…). That alone isn’t enough to excuse what the “problematic” ones did, but it should be used to create context. Sometimes people make comments or share sentiments on social media of which they may not understand the harmful implications.

We should also be careful with the way we direct our outrage. Women tend to be overwhelmingly called out for these things over men. I haven’t seen nearly as many social repercussions for Arthur Nory, who made racist comments toward a black teammate, or Manrique Larduet, who equated being gay with the worst outcome for a man, as I have for those female gymnasts who we’ve consistently questioned for similar behavior.

The current discourse people have around gymnasts and what makes them problematic is unhealthy and not conducive to meaningful change. I love that the gymternet is so passionate about the sport, but when that passion turns into angry commentary, that doesn’t accomplish anything but a Twitter blocking spree; nobody learns. When it comes to problematic behavior, it’s true that some conduct is so reprehensible that it should be relegated to the dustbin of gymnastics history and kept there. But the majority of the incidents well-known around the gymternet—most of which are purely anecdotal at this point—should not be enough to permanently bar gymnasts from some degree of public respect. We shouldn’t totally dismiss our problematic faves; rather, we should use their flaws as a lesson and means of educating others to improve the sport and the community it serves.