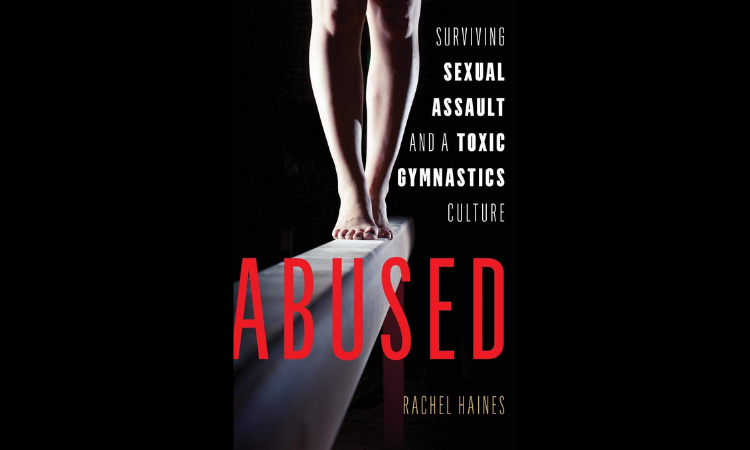 Parts of Rachel Haines’ story will be familiar to anyone who participated in gymnastics. It begins with a young girl—who is a bit of a daredevil—signing up for a Mommy and Me class at a recreational gym and instantly falling in love. Haines walks readers through her journey in the sport, from that first class to pre-team, and then trying out for club.

She explains how, when her smaller Michigan club was bought out, she landed at Gedderts’ Twistars and became part of John Geddert’s powerhouse level 10 team. A glance at her club scores echoes what she describes in the book. She was dominant in a way that many J.O. gymnasts are not, undefeated in the all around in her final level 10 season until J.O. nationals.

When Haines joined the Twistars team, she was recovering from a hamstring injury. It was that injury that led her to meeting Larry Nassar. Though she doesn’t describe his abuse in excruciating detail, what she does explain is how he made her feel. Readers, especially if they have followed the Nassar case and know the details of his abuse, are there with her in a confused, cold sweat.

Haines suffered a severe back injury that led her back to Nassar near the end of her J.O. career. She describes excruciating pain and heartbreaking news from a litany of doctors that she refused to accept. Nassar, though, cleared her to train, and Geddert took his word.

Haines describes training and competing through unimaginable agony in her final level 10 season and into her college career as well, right up to her early retirement after her junior season at Minnesota. She leaves readers with the medical aftermath of having trained on a severe back injury, and closes her story with the Nassar trial and Arthur Ashe Courage Award presented to survivors at the 2018 ESPYS.

Haines’ story is difficult, both because of the subject matter of abuse and because of the inner torment that radiates through her writing. She interjects with italic notes throughout her narrative. Sometimes, they’re things she wishes she could tell her past self. In other instances, she talks directly to the reader. At some points, they’re musings on the challenges she still faces.

The story is also difficult because of moments of tension. Why, in hindsight, knowing what continuing in gymnastics has done to her body, does she still heap praise on John Geddert, the coach who knew her condition and let her continue? Why, with the same hindsight, does she forcefully criticize Minnesota’s trainers for not initially clearing her to train, likening the process to an investor checking the health of an investment? (Minnesota only cleared her after speaking to Nassar.)

Haines does note in a prologue that her experiences are her own and she does not intend to speak for anyone else, but her praise of Geddert is nonetheless problematic. She insinuates that the gymnasts who had problems with him simply didn’t respect him enough or didn’t train hard enough. Some of her other assertions cause pause too; for example, she assumes that other competitors watching her on bars at a regional competition were hoping for her to fall, and attributes their bad wishes toward her on the culture of gymnastics, which she then condemns.

Those problematic moments, though, speak to the continuing project of survival. Haines’ book is both a testament to her healing and a piece of that ongoing work. Her interjections in the narrative, her clear love-hate relationship with the sport and even her conjectures about other gymnasts tell the story of someone who is still surviving.

The overwhelming sense a reader is left with at the end of the book is that survival is not a single act, but a daily state of being. Surviving is something that Haines, and all other survivors, are still doing every day.

“Abused” leaves readers with an excellent sense of the mental anguish Haines suffered and the difficult path survivors walk, with all of its twists and confusion and complications. It’s a messy book in a way, but that’s fitting, since abuse and survival is messy too.

“Abused” is out now and available for purchase at major retailers.

Review by Emily Minehart. College Gym News received a review copy of this book courtesy of the author.