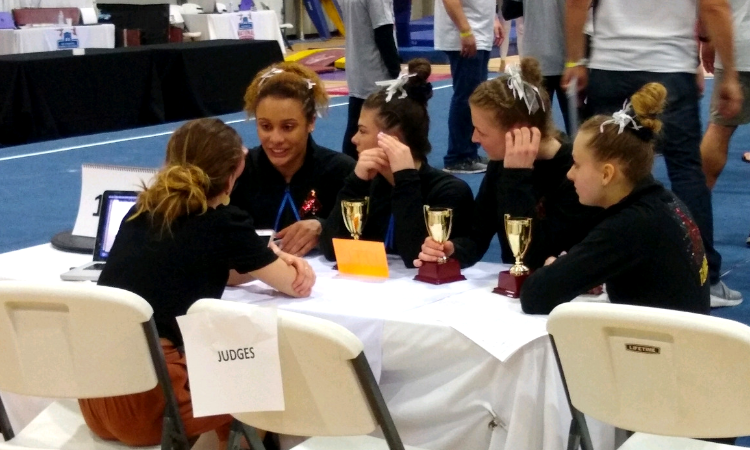 This year Elizabeth, the founder of College Gym News, asked me if I would be willing to cover USAG nationals for the site. She had a photographer who planned to go, but had not yet been able to secure a writer who could make the trek to Bridgeport, Connecticut, where the meet was being held.

Since I was based in New York City, about an hour and a half away by train, I was the closest writer by far. And although I had never covered a live meet before, I agreed—it would be good experience, and I was happy to help her out. Plus, I know gymnastics like the back of my hand and had practice conducting interviews for feature stories before. How hard could it be?

This was my mindset until about two weeks before the event when Elizabeth sent me an incredibly detailed outline of her expectations of my coverage. The deliverables, instructing me on everything from pre-meet to post-meet duties, spanned a little over a page and a half. Panic began to set in.

I am a freelance writer for College Gym News, and it turned out that there was a lot more to the coverage the team provides than just writing an article and emailing it to Elizabeth when it’s finished. Instead, I had to fill the shoes of the team members who work tirelessly each week to provide the best possible coverage of teams across the country.

This meant researching all of the teams competing, pitching feature ideas to the senior editors at College Gym News, connecting with other editors who covered the teams all season-long and reaching out to the communication directors at each university for the interviews I wanted to conduct. I learned how to use WordPress, create “moments” on Twitter and live blog while doing the first two tasks simultaneously.

By mid-week, I had produced four live blogs, four Twitter moments, 11 interviews, one team recap and two feature stories on USAG nationals. How I managed to conquer what had once seemed like an impossibly daunting task is still a bit of a mystery to me.

Perhaps it was possible because of the around-the-clock help I received from Rebecca Scally, who covered the teams all season and could (it seemed) provide answers to all of my questions before I even finished typing them. Perhaps it was because I got to work alongside the team’s veteran photographer, Emily Howell-Forbes, who provided a constant stream of reassurance to soothe my frayed nerves.

Or maybe it was because, unlike myself, College Gym News HAD done this before—many times over. There were systems in place, databases to pull from and outlines to follow. It worked like a well-oiled machine because it was one.

As some of you may realize, the team at College Gym News works on a volunteer basis. Most, if not all of its team members, hold separate, full-time jobs or are full-time students. Travel costs are not covered, and all of the long hours spent working during meet weekends are at the expense of their free time and life obligations. They do it for the love of college gymnastics.

The hard work and dedication of these talented volunteers have helped grow the site exponentially since its founding in the fall of 2015. Its more than 120,000 visitors each month is thanks, in part, to the team’s commitment to bring coverage to ALL of the collegiate programs. College Gym News is one of the only sites to bring regular, detailed reporting to not just division I teams, but DII and DIII as well.

College Gym News’ commitment to diversity continues to stress what little resources it has to spare, since teams are spread far and wide across the country. Donations are its sole source of revenue and those are all fed back into the system, covering server costs and minimal travel expenses to some of the bigger meets. With more resources at its disposal, the team would be able to increase its reporting to even more competitions—and teams—that deserve in-depth coverage.

Growing NCAA gymnastics, much like the sport itself, requires a team effort. DII and DIII gymnastics grows when there is coverage available to consume, and most importantly, there are fans willing to consume it. Smaller teams become more legitimized through exposure, which College Gym News is dedicated to providing. By supporting the site’s coverage, you are indirectly supporting the growth of college gymnastics itself.

I challenge each and every one of our readers to consider giving back. For me, writing this article was one way I could thank those that gave me the opportunity to cover some incredible teams at USAG nationals this year. Maybe for you, it means supporting the site by donating to College Gym News for the very first time.

Either way, the team at College Gym News will continue to do its best to bring you coverage from around the country—just maybe next year, with a little extra help.

This personal essay was not solicited by College Gym News.