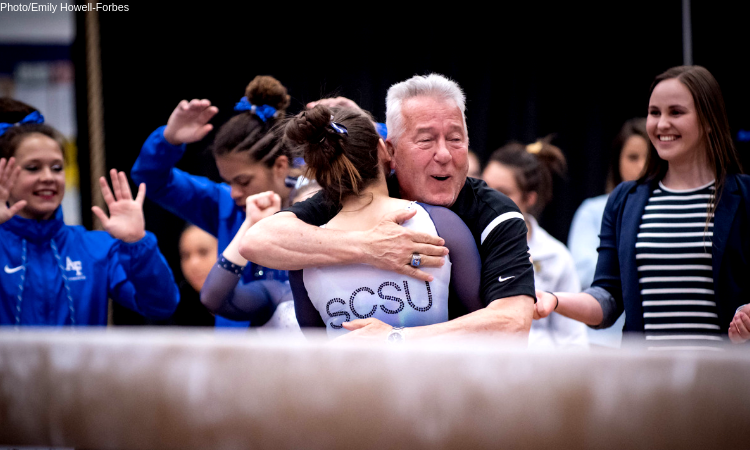 Jerry Nelson, head coach of the Southern Connecticut, recently announced that the 2019 season—his 15th at the team’s helm—would be his last. And what a year to end on.

This has been a historic season, with the Owls breaking multiple program records including highest season-opening score and overall team finish. The team also notched program-high team scores on vault and floor. “We’ve never had a team break so many records,” Nelson said.

Although the team didn’t advance to USAG nationals, two SCSU gymnasts qualified as individuals—freshman Hannah Stahlbrodt and sophomore Jordan Peloquin. They both claimed All-America honors on the balance beam.

While this was a stellar season to end on, Nelson explained that he made the decision to retire based on his age. “It’s always like ‘when is it, when is it.’ I have the ability to retire now; I’ve made some good decisions,” he said. “And it’s time. I’m healthy, and I want to do it now. All for the right reasons.”

Nelson announced his retirement two weekends before nationals. “It was the middle of practice. He called us all over, and it was like a weird mood. You could tell he was choked up,” Peloquin said. “As soon as he started talking, we all knew what was happening and everyone was bawling their eyes out basically. It was the worst.”

Both Peloquin and Stahlbrodt described Nelson as a figure of light and positivity the moment he steps into the gym every day. “He’s never been in a bad mood,” Stahlbrodt said. “He never brought it to practice. He was for sure one of those people who left it at the door. I’m going to miss his joyfulness.”

Peloquin, who transferred from Bowling Green, said Nelson directly impacted her success and happiness this season. On her former team, she didn’t get the opportunity to compete a single routine, but her entire experience changed with Nelson and SCSU.

“When I came, he was literally so positive,” Peloquin said. “He just lightens the mood every practice. He comes in, and the second he walks in the door—huge smile on his face—he starts screaming SC and then we all scream back SU.” The joy and affection she feels for Nelson and SCSU are palpable when she talks about her experience.

Nelson’s career expands a lot further than his time at SCSU though. Before joining the collegiate world, he owned a private gymnastics club for 30 years—Nelson’s Gymnastics Center. He also served as the Commissioner for the 1995 Special Olympic World Championships, which got him noticed by USA Gymnastics.

When they offered Nelson a job, “At first I said no, but then eventually I said yes. I always wondered what else I could do,” he said. Nelson accepted USAG’s offer and worked as Director of Events for several years.

But the real highlights of Nelson’s career have been the athletes. “I get invited to a lot of weddings,” he said. “My daughter once said, ‘They don’t have to invite you, Dad.’ But it’s a reality check that I had an opportunity to be a part of their lives at a critical moment, and it worked for all of us.”

Nelson will continue to help with recruiting efforts for next year. “This is what I love, and I’m carrying it strong right until the end,” he said. As for his replacement, Nelson isn’t so sure. “That’s up to the university,” he explained. “Hopefully I’m involved, but I don’t know all of that yet.”

While he is retiring from coaching collegiate athletes, Nelson wants to remain involved with gymnastics at some level. “This is my sport. I will probably give back,” he said. “I love coaching coaches, and I love critiquing and helping people create a safe and nurturing environment for our athletes to succeed.”

“I’m going to relax for a little bit, but I will get bored,” he said. Until then, Nelson plans to travel the world with his wife once he finishes up at SCSU.