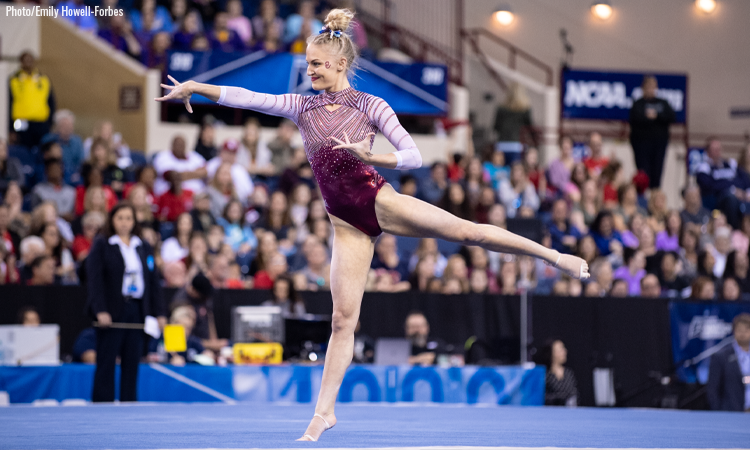 This is the END.

Today we’ve got LSU opening on vault, Oklahoma on bars, UCLA on beam and Denver on floor to wrap up the season. In all likelihood this is a two-horse race—LSU comes up short in national finals with the reliability of death and taxes, while Denver hasn’t put up a total that would be competitive in a someone-else-hits scenario in quite a few weeks.

That absolutely doesn’t mean that those two teams can’t factor in, though. LSU in particular has a friendly rotation order, while Denver is bringing in plenty of momentum from its record-setting season.

UCLA is causing plenty of lineup discourse as usual, skipping over Margzetta Frazier on floor once again and randomly also choosing to warm up Kendal Poston on vault. (Frazier may still go in depending on touch warm up. Poston will not.) Meanwhile, Oklahoma is keeping junior Maggie Nichols in the all around after her triumphant performance yesterday.

By the way, because I’m an unkind person, I’m bolding the name of every senior’s last routine today.

In the biggest shock and surprise ever, Frazier is back in floor.

EDNEY – LSU: I really can’t see vault landings. I thought that was a stick from only her shoulders but now it seems unlikely. 9.85

WEBB – OU: Shy on first handstand. Great Pak, short on another one, leg split on the VL. Toe blind, double front half, chest down and a hop. Rockier start for the Sooners. 9.8125. Nothing to cry over.

DOWELL – OU: Great Ray, toe to bail, not quite extending through her hips like she can. DLO, close to the bar with a tiny hop. 9.900

NICHOLS – OU: Question on the first handstand, Ray to Pak great. Again with the handstands! Van Leeuwen great, ok there’s one, pings off on the DLO but sticks it. 9.8375

KOCIAN – UCLA: Missed it but sounded like a check. Fromt aerial to split, full turn, one and a half dismount with a bunch of stutter steps forward. 9.6625

FLATLEY – UCLA: Front to back looked ok, side aerial, L turn. Punch front full with a tiny bounce in place. 9.8875

SUNDSTROM – DU:  OK double back, chest a touch down. Switch side half, cool, looked really excited. 9.825

KARR – DU: Double pike ok, I cannot get over the fact that her music is Radioactive. What? Overrotated the Rudi, big cross step back and OOB. 9.6875

BROWN – DU: DLO great. One and a half front lay to whatever jump, solid third pass. Ten hands from the team. 9.9375

UCLA and Oklahoma both gave a bit away there, but neither should be devastated. LSU was great on vault, but let’s wait another rotation before deciding whether it’s really happening.

SUNDSTROM – DU: She vaulted! That’s all I’ve got for you.

GLYNN – DU: Tsuk full with a small hop back.

FERRER – LSU: Nice release, bit of feet, good bail. Short on a handstand, DLO with a hop in place.

HARROLD – LSU: Zuchold, one of her better ones. Toe blind to Jaeger, bit of bent elbows onto the table, double front close with a step.

EDNEY – LSU: Hindorff, not much flight, clear hip to bail. DLO with a small hop and an arm swing.

PRIESSMAN – LSU: Tkachev to Pak, good, DLO with a hop back.

FINNEGAN – LSU: Looked short on first handstand to me… Ray, toe on to bail to toe shoot, catches it on her wrists. DLO with a little hop.

TRAUTMAN – OU: Saw a big hop forward on her dismount.

DOWELL – OU: Front to back, switch split, full turn, Kochetkova, weight back on her heels but works through. Punch front full with a hop.

NICHOLS – OU: Front aerial to split, BHS LOSO, touch of knees. Switch to split leap, one and a half twist stuck.

DENNIS – UCLA: PFI, deep with a big step. Front lay front full with the usual hop into choreo, double back.

ROSS – UCLA: Whip double back with a hop, one and a half front lay good. tour jete half split full Shush. Good double pike.

HANO – UCLA: Double lay, front full Barani running jump. Once I watched the music video for this song and it had animated cats in lingerie. Double pike, step back OOB. 9.75

OHASHI – UCLA: Split leg DLO, good, finally actually got that landing right. Combo pass good, seeing the odd clapper among other team sections but this crowd is deeply partisan for the most part. Switch ring switch half tuck full, front full Barani split drop. 9.95. Blowing kisses to the crowd as she leaves.

Seriously, good to see Ohashi go out with a good one. The split leg DLO has been mercurial.

DENNIS – UCLA: Great full, either stuck or just a small scoot back.

WRIGHT – UCLA: One and a half, usual step forward.

TRATZ – UCLA: FTY with a small hop back but HUGE.

ROSS – UCLA: One and a half, slightly deeper than usual but stands it right up.

RUIZ – DU: Blind full to Tkachev, LOW but over. Soft back in bail, DLO stuck.

GLYNN – DU: CLOSE on the Gienger, arch on her bail, hangs on and keeps going. FTDB pings aoff and takes a small step back.

KARR – DU: Blind full Gienger to overshoot, looked a little funky in the air but worked through fine. Short on a handstand, DLO with a hop back.

NICHOLS – OU:  Double pike, great. Missed the other pass. Problems with a two pass routine, if one lands behind people I’m out of luck.

DOWELL – OU: Dowell, bit of a bounce into the landing. One and a half front lay, great. Front lay front full.

DEAN – LSU: Full turn, side aerial BHS with one VERY bent knee. Side aerial back full.

FINNEGAN – LSU: Wolf turn, good series, side somi. Side aerial back full, looked like a bounce.

LEHRMANN – OU: One and a half, hop in place. Great end to her career.

DEGOUVEIA – OU: Good one and a half, hop forward. Big improvement on yesterday..

TRAUTMAN – OU: One and a half, looked pretty solid.

FRAZIER – UCLA: Maloney to Pak, gorgeous, shy on handstand on LB, van Leeuwen. DLO, arm swing but has to hop forward. Not her best.

DENNIS – UCLA: Maloney, leg sep on the backswing, to bail. Pings on DLO, chest way down to try to hold it but it isn’t there.

FLATLEY – UCLA: Giant to blind to Jaeger, high and caught on top of the bar, toe to bail, DLO stuck.

KOCIAN – UCLA: Right on the first handstand, Chow to Pak, FTDB with a hop back. Chris Waller, who I just noticed is in his velvet jacket, is happy.

ROSS – UCLA: Maloney to bail to toe shoot, RIGHT on the handstand on high, DLO stuck with an arm swing. 9.95

KARR – DU: Saw a dead stick on her one and a half dismount.

PRIESSMAN – LSU: Missed the first pass, music is LOUD, one and a half front lay with a hop,

FINNEGAN – LSU: One and a half thru two and a half, she always seems surprised by that landing. Double back, I forgot to write about the rest because of everything but it was great.

KELLEY – LSU: Gets the stage to herself to close out her career. Double lay good, nice leaps, UCLA is clapping along. Got it done and now crying pointing to the UCLA section. Lexie is crying too.

Never really in doubt for the Sooners, but so impressive anyway. And what a meet for LSU! The senior Tigers couldn’t have gone out with a better day. I fully expect it to take a little while for LSU to learn to cope without these four, but they’ll leave Baton Rouge on the highest of highs.

We’ve got a high quality UCLA dance party to close the weekend, because of course. I also got a cell phone photo of Chris and Randy hugging that I will treasure forever. 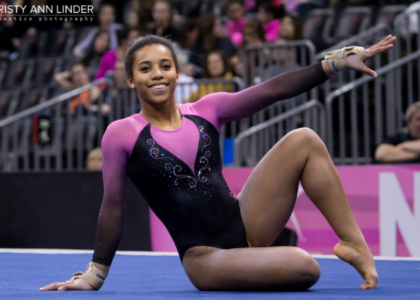 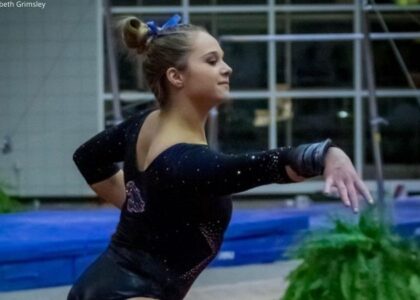 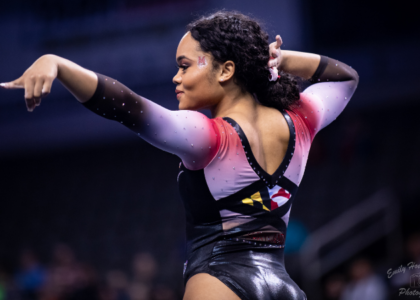