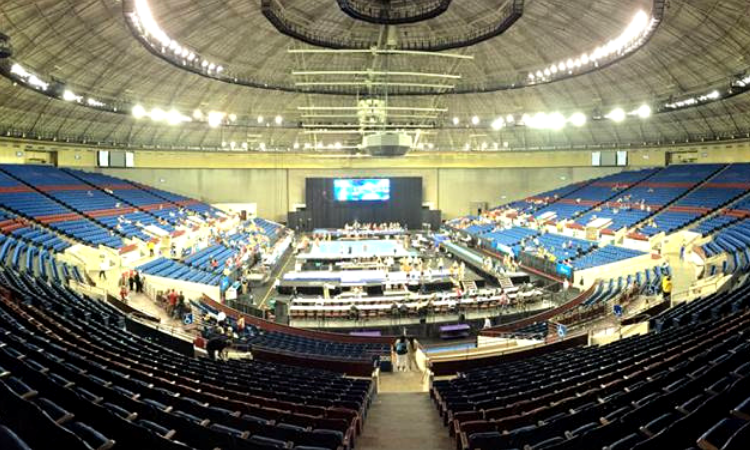 Which city will host the NCAA Women’s Gymnastics National Championships each year is a highly anticipated reveal that gymnasts and fans alike look forward to every four years.

“Fort Worth has got a real neat kind of perspective with that link to the old west, and the cowboys and culture,” Jason Sands, director of sports marketing at Visit Fort Worth, said. “When people come here, they really enjoy themselves.”

Fort Worth played host to the championships in the past, hosting in both 2015 and 2016 and giving those that helped with the bid process—Texas Woman’s and Knight Eady, among others—experience and expertise with what to expect.

But perhaps the biggest draw is the new Dickie’s Arena that’s set to open in time for the 2020 championships and will feature the second-largest arena scoreboard in the country, an outdoor plaza fit for all sorts of activities and even stunning view of the city skyline to boot.

“They spared no expense when it comes to providing an elevated experience for fans,” Sands said. “It’s got to be one of the premiere venues in the country, and we’re very lucky to have it here in Fort Worth.”

While spectators will have to wait another year to experience the state-of-the-art facilities that Dickie’s has to offer, gymnasts and coaches will get a sneak peek at what’s in store at this year’s championship banquet that’s set to be held just a block away from the site of the new facilities at the Fort Worth Museum of Science and History.

The new arena is part of a larger goal to make the event a permanent fixture in the community. It may seem rather unusual for a championship to be in the same city for four years, with NCAAs in the past staying in one spot for no more than two, but it could all be part of a master plan to create a long-lasting legacy in the same way that Omaha is to the the College World Series or Oklahoma City is to the women’s tournament.

“That’s our ultimate goal,” Sands said. “To be a long term host site for the NCAA and for this championships specifically.”

But it all starts with year one—2019—and the pressure is on for Fort Worth to not only deliver what it promised during the initial bid process but create an experience that will have the spectators coming back for years two, three, four and beyond as well.

Part of the effort is being contributed by Texas Woman’s University, which is acting as the host school for these championships. TWU’s gymnastics team, a Division II program in Denton, Texas, is an 11-time USAG national champion and helped host the NCAA championships in Texas in ‘15 and ‘16.

But despite all the hard work being put into hosting such a high-profile event, it’s unlikely TWU will end up having any gymnasts represented at the competition.

“I am grateful that my university administration sees the great value in NCAA women’s gymnastics,” Bowerman said. “Therefore, we love having the opportunity to offer our help and support in any way that we can.”

It also doesn’t hurt that there are a large amount—78, in fact—of gymnastics clubs in the Metroplex area alone, many of which are world-renowned and well-known, which is something Sands and his team are working to take advantage of.

“We reached out to all those folks, let them know what we were doing and built a small little local advisory committee,” Sands said. “So we’ve got a good team of people that really represents the gymnastics community. They’ve been giving us their feedback and working with us every step of the way to help promote the event and make sure it goes off flawlessly.”

However, getting the gymnastics fans in the area to attend isn’t enough. Especially when the championships upgrades to the 14,000-seat arena in 2020. In fact, it’s drawing in people like Sands himself, who had never been to a gymnastics championships before 2018 when he attended the meet in St. Louis.

“I was blown away,” he said. “I’ve been to hundreds of sporting events throughout my whole life. It was one of the most electric, amazing, exciting sporting events I’ve ever been to.”

And that’s the message Fort Worth Sports and the entire organizing committee wants to make sure the everyday Texan receives.

“It’s just making sure that people are aware of the championship and understand how special this is,” Sands said. “Once people come to this event for the first time, they’re gonna be hooked. Then we’ll be selling out that 14,000-seat arena starting next year.”