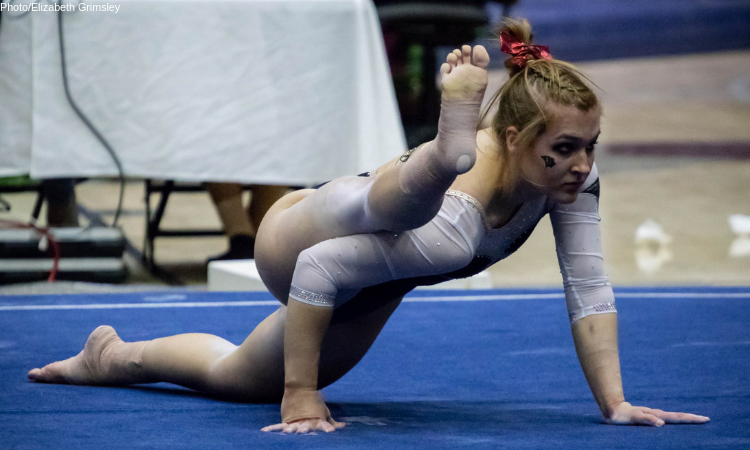 Welcome to the first semifinal of what promises to be a weekend full of tight and exciting competition!

Judging by the way the season has unfolded, Lindenwood should have a pretty secure spot for tomorrow’s team final competition, but hey, it’s postseason and nothing is ever guaranteed ¯\_(ツ)_/¯. After some devastating upsets last weekend at NCAA regionals, I think it’s safe to say a lot of us are experiencing #trustissues as the season comes to a close. With that said, Lindenwood is sitting pretty for a first or second place finish tonight.

The second spot for tomorrow’s team final is a little trickier. No. 4 Yale and No. 5 Air Force are a pretty even match, although Yale is technically favored. Don’t count Air Force out though; its peak this season at the MPSF championship two weeks ago shows it’s capable of an upset if it can hit.

Didn’t see what happened on last bar routine but it went 8.600 for Yale

Chia (Yale): Comes back for a very clean routine other than a short handstand before a lovely and (almost!) stuck toe-front tuck half dismount

Kissinger (WCU): Looks a bit off on floor, LOSO out of rudi was under rotated, middle pass just a back 1.5 (don’t know if it was a mistake) and ended with a rudi double stag jump but very low amplitude

Wang (Yale): From the sound of Yale’s screams, looks like ANOTHER stuck dismount!! 9.850

Fischer (AFA): gorgeous HS LSO series, went for a double full turn (omg!! so rare), but unfortunately didn’t make it around all the way and stepped back early, had to re-do cat leap into her side arial-gainer full dismount but nice landing to finish it off – 9.675 despite a few breaks

Okay solid first round for our three major contenders, with WCU definitely lagging behind after multiple falls on floor. Let me tell you, seeing Yale get after those landings on bars feels like they’re in the right championship mindset. AFA also had a number of sticks on beam, and it’s hard to see vault landings because the floor corral is very unfortunately placed, but overall it seemed like vault went well for LU too. These three teams are going to be fighting tooth-and-nail for these two Championship tickets.

Colwell (LU): Caught out of corner of my eye, seemed pretty good but some weird pikeyness on giants, stuck double lay. One judge gave 9.800 the other gave a 9.650, parents are upset

Seeing a lot of really low scores from WCU on vault, seems like multiple falls

Okay, so despite a few underrotations on floor, AFA is rocking this meet, with LU close at their heels. Yale was tripped up a bit on beam, but it’s only the second rotation and again, it’s post season so literally anything could happen at any point. WCU on the other hand is completely out of the running at this point, but could have some individuals make it to Sunday’s event finals.

Alexander (LU): Beautiful split sissone, full turn, she is so sharp and elegant on this event. Great flexibility too, stuck gainer pike dismount! 9.800

Milliet (LU): gorgeous BHS LSO series, ring jump, piked front toss but doesn’t quite get enough height and falls, pretty attitude turn to a gainer front full dismount, too bad about the fall.. everything else was beautiful – 9.250.

Firth (Yale): FHS front double twist to punch front (wow!), she’s really playing around with this music and choreo, ends with a deductionless rudi (for what it’s worth, two LU parents just looked at eachother and go “wow. that was a really nice routine). And it’s a 9.725, which seems low?

Okay it’s pretty clear that AFA and LU are going to be the two teams to advance to tomorrow’s Championship. Sorry about wordpress by the way, I have literally no idea what’s going on with the format and why it looks like that. Also it’s approximately 1 million degrees in this gym. Doing fine!

Franklin (LU): Opening pass front tuck through to double tuck, really nice, torjete full WOW, solid double pike to finish. Exactly what you want in in the lead-off spot. Aw her mom next to me is crying :’) – 9.750

Buford (Yale): Front-front pike but back of the board, hands barely made the table, had to tuck early and still goes 9.700!

Murphy (AFA): Honestly I’m not quick enough to lay out these bar routines, but good routine until her double lay dismount which she sat down on. Hopefully their one and only fall on bars – 9.150.

Baze (LU): Huge double pike to open, second pass a very clean double tuck, last pass 1.5 to front pike half, was not expecting that! So unique! – 9.750

Stevenson (AFA): Wow, that was a beautiful routine. One of the best overshoot-hands I’ve seen this whole meet, ended with a nice blind full to double tuck. One step back on landing. – 9.775

Alexander (LU): I’m obsessed with this choreo. So dramatic; she’s a true performer. Clean 1.5 front lay second pass, last pass double pike and STUCK! She needs to do Cirque or something. And it’s a 9.800!

Henry (LU): Practically deductionless opening double pike, some more really engaging choreo and music. Oh no oh no. Second pass double tuck it looks like she landed right on the edge of the four-incher and tripped back over it. She did pike down on landing but I really think it wouldn’t have been a fall if the mat wasn’t there. Ended with a nice 1.5 lay – 9.05.

Leman (LU): Front lay front double full, landed under rotated and could have been sat down but she saved it. Good fight. Practically walks into a 1.5  punch pike, OK. Ends with a nice rudi, way to recover after a fall. 9.825.

Jordan (CC – individual): Nice double pike to open, stunning tour jete half. Holy second pass. So many saltos strung together to a huuuge split jump rebound. Ends with a gigantic rudi straddle. She has such a presence on floor 0 9.825.