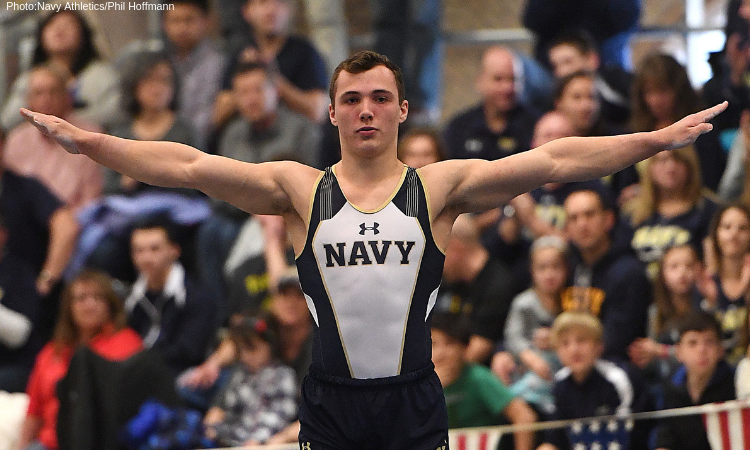 What if you could attend college for free, continue to compete in the sport that you love and have a guaranteed job right after graduation? This is the reality for those gymnasts who attend one of three service academies: the Air Force Academy, the Naval Academy and the Military Academy (also known as West Point). All three schools have men’s teams while only Air Force also supports women.

The United States service academies are unlike any other school. In addition to the education that students receive, they are also trained to become officers in their respective military branches. The cost of tuition is fully paid for by the government in exchange for service as an officer in the military for a period of time after graduation.

The path to deciding to attend a service academy is different for everyone. And not all gymnasts who choose to attend one were previously interested in serving. “I wasn’t interested at all, all through high school,” Naval Academy junior Frank Bradley said. “Then junior year when I started sending out emails to a bunch of schools for gymnastics, [assistant] coach Craig [Holt] called me, and I didn’t really have an idea of what the academy was like. I wasn’t really interested in serving in the military, so he kind of sparked the thought of perhaps coming here.”

Anna Salamone, a junior on the Air Force women’s team, said she became interested when she realized the opportunities the Academy had to offer. “Once I came here on visits, I realized it wasn’t so bad,” she said. “You have a guaranteed job, and you get a pretty cool opportunity.”

So far, this may sound simple, but the admissions process to get into one of these schools is long and rigorous. To be eligible to apply, those interested have to be a U.S. citizen, unmarried with no dependents and be between 17 and 23 years old upon enrollment. In addition to being qualified academically, applicants have to pass a physical fitness test. But even if all of these requirements are met, it still doesn’t guarantee entrance into the academy.

Prospective students also have to receive a nomination from an official source, typically his or her U.S. Representative, U.S. Senator or the Vice President of the United States. Each of these sources may have up to five people attending each academy at one time and may nominate up to 10 candidates to fill an open position. One of these nominees will receive an appointment (or admission) to the academy. There’s no separate athlete track. Everyone who wants to attend one of the service academies must go through the same steps.

Because of this difficult process, what a coach at a service academy looks for in a recruit is different from what other coaches might look for. When Doug Day, the head coach of the women’s Air Force team, goes to J.O. nationals to recruit, he first looks at their GPA. “The ones with the highest grades are the kids that we actually look at because we know they’ll have a chance to get through here academically,” he said.

“That’s probably the biggest challenge,” Naval Academy head coach Kip Simons said. “You can find a hotshot gymnast out there that wants to come to the Naval Academy, and as hard as you try to get them in, they’re not going to get in unless they’re able to meet all of the minimum standards for admissions.”

Even if a gymnast meets these standards and is able to get in, it’s hardly an easy road to graduation. Academics at these schools are top notch and extremely rigorous. For example, all students at the Air Force Academy need 144 credits to graduate, including an intense 100-credit core curriculum that contains multiple math, science and engineering courses.

However, because these institutions are small (less than 4,500 students), there are plenty of resources to help the students get through all these classes.

“The mindset of everyone here is: You guys are the best of the best; that’s why you’re here,” Simons said. “You’ve already been given admissions into this institution, so if you made it through the rigorous admissions process, then everybody assumes that you’re the cream of the crop—the best of the best. So we’re going to bend over backwards to make sure that you learn while you’re here.”

Rigorous academics, athletics and military duties makes for a tough workload to balance, and time management is key. It can be a challenge, but it’s not as impossible as it might appear.

“It’s still a challenge,” West Point senior Cole Casanova said. “I’ve learned it’s really important to start off the school year really strong so that you don’t you don’t find yourself in a hole.”

“I try to get my work done early,” Salamone said. “If I have practice that day and I know I have an assignment, I’ll try to get it done over the weekend so that I don’t have to worry about it during the week when I am practicing.”

“There is a lot on your plate, and there’s a lot to do,” said Bradley. “But if you have good time management and you’re really dedicated to doing well in school, keeping your grades up and gymnastics, then it’s more doable than you’d think.”

Coaches also face challenges that they would not face elsewhere, mostly having to do with the busy schedules the athletes have.

“There’s multiple military expectations.” Day said. “If the Vice President or the President of the United States is coming to visit our campus, they shut practice down completely because everyone is expected to be on the parade field.”

Many upperclassmen are also involved with leadership roles within their squadrons. “There are additional military duties in that leadership role, which sometimes interferes with gymnastics,” he said.

Doug Van Everen, head coach at West Point, said the biggest challenges are the things you don’t have control over. “There’s a lot of classes, phys ed classes and just different military things that they’re going to do,” he said. Because of this, it is that much harder for the gymnasts to be productive in training and have the proper time for recovery afterward.

“It’s harder going to an academy and being a Division I athlete, there’s no doubt,” Van Everen said. “You just lose that much more time of your day to balance the load.”

During the summertime when school is not in session, all students at the academies are required to participate in military training of some sort. Depending on where this training happens, it can make gymnastics training difficult if not impossible.

The summer after his sophomore year, Bradley spent two months in San Diego learning how to sail. Because of this, he was not able to train as much as a gymnast at a non-military school would.

“Obviously I wasn’t able to get up into the gym as much as I’d like to during those two months, and that’s a big setback,” he said. “If everyone on the Navy gymnastics team is taking two months out of the three off during the summer, we’re obviously set up for a disadvantage in terms of meet season. You’re spending at least a couple of weeks [when the school year starts] trying to get those skills back, getting your basics back and readjusting yourself.”

Salamone’s experience at Air Force was slightly different. Most of her training happened at or near the Academy, so she was able to go into the gym a few times a week to practice. Still, it can be hard to fit into a busy schedule.

“When you become a junior, you’re working basic [training] for the incoming freshmen,” she said. “With gymnastics, it’s a little hard to balance that because when you’re working basic, you’ll have full days of stuff, and you won’t really have time to come back to the gym. But you also have days off here and there where I try to come into the gym at least a couple of times.”

Casanova was able to travel to England and Germany one summer for Army field training. Because of this, he wasn’t able to get in the gym at all.

Because the primary focus at the service academies is to train future military officers, the mindset of these athletes is different from what you would find at a civilian school.

“We’re not in the business of graduating kids to go professional in a sport,” Simons said. “We’re graduating elite level gymnasts that are going to go on and serve on a team of protecting this country.”

Despite all of these challenges, having the opportunity to both compete in the sport they love, as well as prepare to serve the country, is all worth it. While the service academies are not for everyone, those who do choose to attend one have a one-of-a-kind opportunity.

“I’m really proud that I did it,” Casanova said. “Not only do I get to represent West Point and gymnastics, but I am proud of the things I do in the Army because it’s [going] the extra mile compared to normal schools.”