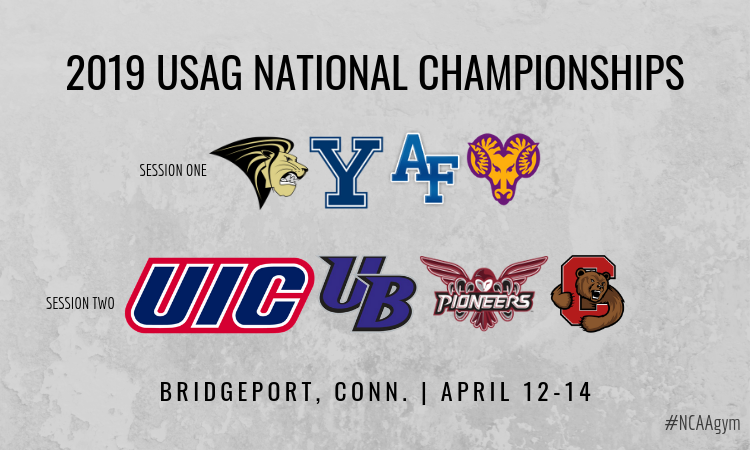 While the top DI teams in the country are focusing on resting and polishing little details in preparation for the NCAA national championships next weekend, the best programs with less than seven and a half full scholarships take center stage in Bridgeport, Connecticut, this weekend for the USAG National Championships.

If you’re new to the USAG-watching ranks, you’re in for a thrilling competition. UIC led the field almost all year before being overtaken in the last week of regular season by Lindenwood. If the duel between this pair wasn’t fascinating enough, you should also know that BOTH meetings between these two teams in 2019 have ended in a tie. Two-time defending champion Texas Woman’s has struggled this year after graduating a critical senior class last year and comes in seeded No. 6 while No. 3 Bridgeport can be inconsistent but is more than capable of an upset.

Lindenwood enters the championship seeded No. 1 after a landmark year that included its first ever qualification to regionals and its best ever year-end national ranking of No. 36. The Lions should cruise through this semifinal, but fatigue might be a factor as the weekend progresses—the Lions are the only USAG team that competed last weekend. We’ll be watching the status of No. 1 all arounder Courtney Mitchell, who took a painful landing on floor at the conference championship and was restricted to bars at regionals. Yale is also expected to compete without a superstar in Jacey Baldovino, who has been missing for several weeks with a presumed knee injury. The Bulldogs have had a standout season in 2019 but could be vulnerable to a surging Air Force. The Falcons set a program record to dominate the MPSF championship two weeks ago and could threaten the best with a repeat performance. For West Chester, qualifying to nationals for only the second time in program history is a win in and of itself, but expect some Golden Rams to make event finals.

The battle between Yale and Air Force in this semifinal is more or less a toss up. Both teams sit comfortably in the low- to mid-195 range on a week-to-week basis, with Yale the more consistent of the pair but Air Force seemingly capable of a higher peak. Yale’s best meets of the year mostly came in March while Air Force has been up and down all year despite finishing strong.

Lindenwood’s Aleah Turon does a spectacular Yurchenko Arabian on vault. Courtney Mitchell has racked up numerous 9.9s this year but is most likely to only show bars at this meet. While it’s not always her highest-scoring event, Andavea Alexander‘s performance quality on floor is otherworldly. Yale senior Jessica Wang is a rockstar on bars and qualified to regionals this year on the event. Newcomer Lindsay Chia is incredibly elegant on beam, and it’s a highlight for all around star Jade Buford too. If you haven’t been living under a rock for the last three years, you’ve probably already watched Anna Salamone of Air Force on bars, but it never hurts to enjoy it again. Tyler Davis is an incredibly compelling floor star for the Falcons, and Analise Howard is beautiful on beam. For West Chester, Sarah Boyd is a can’t-miss on beam, and Jessica Meakim has topped out at 9.925 on floor this year.

UIC led the USAG rankings for most of the season and has the highest peak score of the field this year. If there’s a stumbling block for the Flames, it’s their mental game—they’ve done an admirable job staying focused, but it would be more than understandable if facing down the final days of their program is distracting. Bridgeport is an underdog title contender if it can fix beam. The Purple Knights haven’t strung a hit rotation together since February, but if they can change that, they’re as good as anyone in the field. Texas Woman’s has struggled in 2019, but the increased stakes of postseason might inspire the Pioneers to up their game. Dynamic yet inconsistent Cornell will have the same hope after setting a program record in last year’s semifinal.

Bridgeport’s season high isn’t anywhere near its realistic peak this year. If the Purple Knights can hit a beam rotation, they’re capable of a 196. Texas Woman’s can’t peak as high, but it is also capable of more than it’s shown so far in 2019 and could sneak in if one of the top pair has an off day. Cornell is a longer shot and would need a lot of things to go right to qualify after an injury-ridden season. But its program record (a 195.000 recorded in 2018’s semifinals) could fall.

UIC freshman Alisa Sheremeta is a phenom and a cult sensation (a small cult, anyway) on floor. Toni Alicke‘s Germanness is unmissable in her spectacular bar routine, and Kayla Baddeley is an all around superstar and a regional qualifier on vault. Bridgeport sophomore Kathryn Doran has tied the program record on bars this year. Maya Reimers’ floor is life-changing, and at one point this year she performed a routine with two E passes. Gabrielle Kistner is our favorite of Bridgeport’s fantastic vault rotation. TWU’s Erin Alderman has been heroic on beam and floor this year, and we love Bria Northrop‘s dynamic beam too (check the tour jete half and unique series!) Cornell has some spectacular floor routines—Izzy Herczeg and Claire Haklik have gone 9.900-plus recently—and freshman Donna Webster’s vault is gorgeous and stickable.

Lindenwood is the leading contender for the national title. A win would mark the Lions’ third title in their seven-year history. UIC is in its first and presumably only year of USAG competition, and if it can prevail, it would join the also-cut men’s gymnastics team as the only national championship winners in school history. Upset threat Bridgeport has numerous USAG titles, most recently in 2014. If the battle comes down to the Lions versus the Flames as we expect, every routine will count as the two try to break the deadlock they’ve found themselves in in their last two meetings. If Bridgeport wants to contend, it’s all about beam. The Purple Knights haven’t hit a full rotation since February, but if they can do it here, a season high that can threaten the top pair is possible.