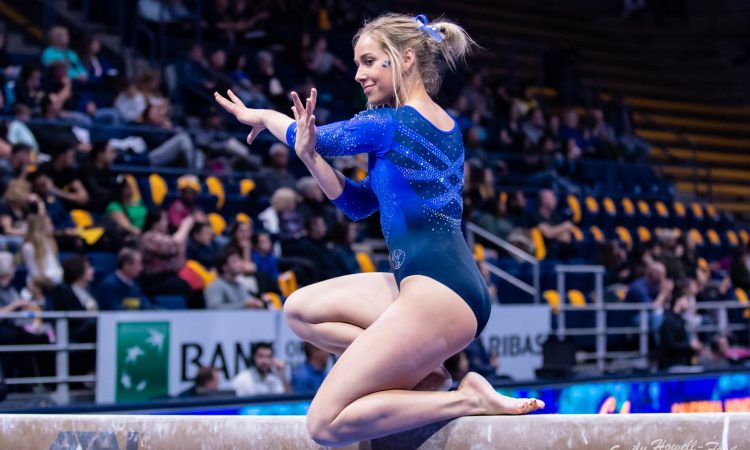 Numerically, this is the most interesting regional in the country, which probably means we’re about to be bored to death. Oh well. All four teams in this group have gone 197-plus at least one time this season. It would be shocking to see Minnesota’s incredible season end this early, but it’s far from impossible.

This regional also includes all around qualifier Lea Mitchell from Michigan State, who will rotate with Arkansas. Marissa Nychyk, Julianna Roland and Lauren DeMeno will participate as vault specialists, Erin Alderman and Courtney Mitchell (pending injury status; she only competed bars yesterday) will compete on beam and Kaitlyn Menzione and Anna Kaziska will appear on floor.

Utah will start on vault, Arkansas on bars, Minnesota on beam and BYU on floor.

Well, it’s 12:02 and apparetly we’re going, fellas. To be honest I did not expect this sort of timeliness.

LOPER – MINN: BHS LOSO, little adjustment. Switch straddle quarter, one and a half dismount with a baby step. 9.7

MERRELL-GILES – UTAH: One and a half, good with a midsize step forward. 9.850

GARNER – ARK: Full turn to Gienger to overshoot, STUNNING. Arkansas is dealing with this event very well. Blind full double back with a step. 9.8

SKINNER – UTAH: Okay DTY, usual legs and a touch underrotated with a hop back. 9.900

TESSEN – UU: One and a half, the usual slightly odd dynamics and a big step out to one side. 9.825

SCORES HAVE GONE DOWN.

EVANS – BYU: Think she didn’t notice that the flag had gone up at the beginning, her coach came and nudged her onto the floor and she looked a bit surprised. Double pike great, double back underrotated by a touch with a hop forward. Tour jete half wolf full, judge looks SO entertained. Front lay front full to close.

Really interesting start! Scores were tough for everyone. Minnesota on beam looked quite a bit better than a 48.900 to me, but there was a lot of hopping. I’d really love if the scores worked throughout the whole meet, but what can you do.

LEE – UTAH: Blind change to Jaeger to overshoot, nice. Blind to half to double back with a step back. 9.75 why?

YAMZON – ARK: Switch switch half, triple series with a bit of knees but really confident. Full turn, a touch off line but okay, kickover front. Gainer full dismount and scoots her feet together. 9.75

HIGGINS – MINN: Leaving chalk traces on the floor from her hands in her opening choreo. Front double full, cross step and her foot lands on the line. One and a half front pike nice and floaty. Rudi to close. 9.7

PITOU – BYU:  Lost in the air on what looked like an intended Y arabian, lands hard on her side. Walks away but looks shaken and in pain. 8.325, surprised they didn’t zero it honestly. Hope she’s ok 🙁

HAMBRICK – ARK: Stag to switch half. Side aerial,  lean and off. Full turn… apparently I abandoned this routine… 9.15.

TESSEN – UTAH: Blind to Jaeger, catches a little close and messy, arch on the bail but saves it. FTDB stuck.

SONIER – MINN: Good first pass, switch side split full a little underrotated. Rudi, one and a half front lay I think. 9.7

ELSWICK – ARK: Wolf split 3/4, lands her series on one foot but saves it. Hop forward on dismount.

MERRELL-GILES – UTAH: Looked like an archier catch on the Deltchev, good bail, FTDB and up on her toes to hold on. 9.

ROLAND – UB: Preparing AGGRESSIVELY for vault which I love. FTY, bit of leg split on the table but flared beautifully with a little scoot back.

SKINNER – UU: Ray, okay, archy on a handstand, good bail. Toe on to FTDB, back on her heels on the landing but holds it. 9.9

BURTON – ARK: Front aerial, almost looked like she meant to connect out of it but danced out , BHS LOSO greaaaat. Split to sheep, gainer full with a little scoot.

LOPER – MINN: Front lay to Rudi good, one and a half twist gorgeous.

GARNER – ARK: Side aerial to LOSO. Side aerial back full and lands absolutely dead. You don’t see landings stuck that emphatically very often.

RAMLER – MINN: Double pike, stumble back but stays in bounds. Good leaps, Rudi with her chest a touch down. One and a half thru double full… usually that’s the funky pass but she nailed it today. 9.7

MITCHELL – MSU: This leotard is really absolutely perfect. Triple series, little lean but works through, full turn. Front aerial, off to one side and lands on one leg, pretty leaps. One and a half twist stuck.

WILLIAMS – MINN: Front double twist, hop to lunge and almost misses her front foot but it’s fine. Switch side Popa is TEXTBOOK, one and a half front lay also just a touch off on the landing but she makes it work. FHS Rudi great.

MENZIONE – BALL STATE: Full in, looks a touch under, up on her toes to more or less hold it stuck. Front lay Barani, ooh the performance quality. Double back I think, underrotated and crunchy landing.

This is starting to get stressful. Minnesota is off its game and vault won’t help. Bars will, but I wouldn’t feel comfortable leaving it down to the last rotation if I were Jenny Hansen.

YAMZON – ARK: Double back. Good double pike, chest a bit down but makes it work. Twisting combo to close is good. 9.7

ZHONG – BYU: Nice Jaeger, pretty leg form. Some of these handstands are borderline. DLO dismount with leg sep and a hop. 9.75

RAMLER – MINN: One and a half, best leg form I think I’ve seen from her, scoots one foot back an inch or two into salute but GREAT. 9.875

ELSWICK – ARK: Double arabian, cowboyed but good landing, and back with a gorgeous double back. She’s a great dancer. Tour jete half wolf full, I think that was a front full front pike. 9.85

LOPER – MINN: One and a half and stuck. I think she lifted one heel, it wasn’t an absolutely deductionless landing, but it was freaking good. 9.95!!

Dream of a vault rotation for the Gophers. This event can be a bit of a liability.

EVANS – BYU: Toe to Gienger to overshoot fabulous. Pretty double lay, hop to salute. 9.725… maybe she missed a handstand, it’s impossible to tell from this angle.

MERRELL-GILES – UU: switch split, triple series a bit off line but saves it with an arm swing. One and a half twist stuck-ish. 9.8

SKINNER – UU: BHS LOSO, usual form. Side aerial. Full turn, switch to straddle. Double back with chest down and a midsize step forward. 9.8

SHAFFER – ARK: Double arabian, double back. Really solid landings. Tour jete half to Popa, one and a half front lay I think. 9.85

CARTER – ARK: Double back, glorious, this routine is one of my absolute favorites. One and a half front full, bigger step forwards, tour jete half split full. Double back, little scoot back on both feet. 9.9

It’s going to be TIGHT but I feel like Minnesota’s got this. So impressed by Arkansas’ competitiveness today.

ROBERTS – UU: Front lay to Rudi, good. Double back. One and a half front lay is good.

QUAGLIA – MINN: Blind to pike Jaeger to overshoot, bit of leg split in the middle. Blind full to double back, hop to salute.

PENNESE – ARK: Solid FTY again, off to one side but better form than Yamzon. Not much distance. 9.75

WILLMARTH – MINN: Ray with flexed feet, bail is good. Blind full double back with a big hop back.

HAMBRICK – ARK: Solid one and a half, looked like two quick steps out?

MCGLONE – ARK: Huge full, unfortunately several coaches were standing in front of the mat and we couldn’t see the landing. Something switch double stag…

RAMLER – MINN: Maloney to Pak, Van Leeuwen, toe on FTDB stuck. One of her very best.

ELSWICK – ARK: One and a half, close to the table and underrotated, takes two steps back and gets even closer.

LU – MINN: Maloney to Pak, stunning. Half turn on the LB version today, DLO and hop to salute. Needs a 9.8 for Minnesota to qualify. Should have it.

ALDERMAN – TWU: She’s been an absolute hero for the Pioneers this year. So glad she gets this reward. Split?? to LOSO, side aerial, check, holds it. Beat straddle 3/4. BHS LOSO, another lean check, full in okay.

SKINNER – UU: Double double, leaps a little crazy, one and a half to double full.

KAZISKA – SEMO: Front double full, a little under but solid landing.  Really nice leaps, one and a half front lay. Rudi to LOSO, foot shift, but great. Completely undaunted by the big stage. Good for her.

So exciting!! Bummer for Arkansas to come up just short like that but how exciting that it came down to the last rotation. Utah didn’t look unbeatable, either. Tomorrow should be interesting.