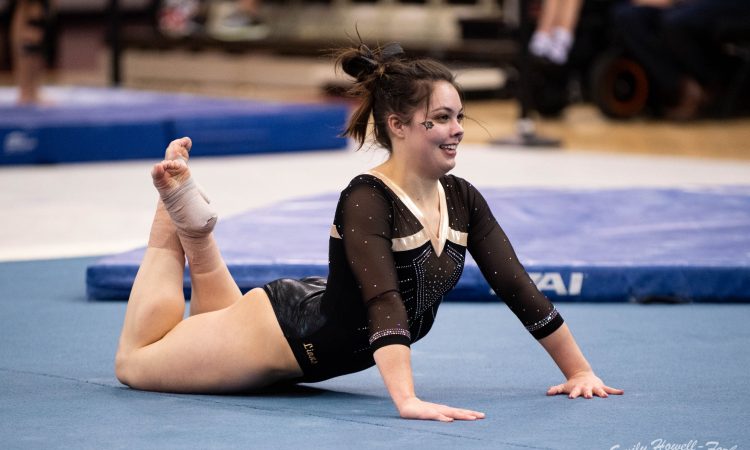 These two teams were the last two to squeak into regionals on the strength of their conference championship results. Things could get very interesting, especially considering that Lindenwood’s best all arounder may have sustained an injury at MICs. The Colonials do have an edge in stats through the year, but don’t underestimate Lindenwood’s potential. The Lions do gorgeous gymnastics and are seriously excited to have made regionals for the first time in school history.

George Washington will begin the meet on vault, and Lindenwood will start on bars.

ALEXANDER – LU: Blind to pike Jaeger, little leg sep on the catch, to overshoot. DLO with a little leg split and a hop in place. 9.750

BOOGERD – LU: Half turn to Deltchev to overshoot. Little chaotic but okay. Slightly off on one handstand, DLO with a little scoot back. 9.750

MCLAUGHLIN – GWU: Yurchenko full, low on the table, gets it around okay. with a small hop. 9.750

Scores are definitely going low all around. That seems consistent with the other play in meets.

COLWELL – LU: Tkachev with feet, blind to straddle back, huge floaty DLO with a hop. 9.700

ZOIS – GWU: Nice full, strongest on the block so far I think, hop back. There’s not much to differentiate between these GW vaults. Nice steady lineup. 9.775

HENRY – LU: Blind to Jaeger, huge and gorgeous, bail with a bit of hip angle. FTDB dismount a bit deep with a hop. 9.650

WARHOL – GWU: Yurchenko Arabian I think, comes in low, two big steps and off the mat to one side. 9.350

BAILEY – LU: She’s gorgeous. Lindenwood with a chance to pull ahead here. Blind to Jaeger to overshoot, rock solid and beautiful form, blind full double back comes in a little deep but a quick step forward fixes it. 9.700

Acceptable-not-great start for both. Bars has caused trouble for the Lions a few times this season, so being through clean is great news as is COURTNEY MITCHELL APPARENTLY NOT BEING INJURED.

Hey look at this lineup!

RAYMOND – GWU: Off on Pike Jaeger. Okay through transitions, blind full double back close to the bar with a hop. 8.875

HENRY – LU: Yurchenko arabian, I thought she was going to underrotate it but landed really solidly. Small hop forward. 9.725

TURON – LU: Really nice Yurchenko arabian, skitters forward out, tries to pretend she’s celebrating and just keeps hopping, around in a full circle as she salutes. They could hammer her on that if they wanted to. 9.65.

ZOIS – GWU: Didn’t catch all of that. Why aren’t we alternating?? Looked short on a straddle back, odd dynamics on her double lay with a decent hop.

LEMAN – LU: Yurchenko full, super powerful, keeping that landing down to just one hop was an act of pure willpower. Staring at her feet.  9.65

COHEN – GWU: Holy heck. Messed up a blind full, fully tucked on top of the bar and almost falls, but keeps going and GETS THE TKACHEV OUT OF IT TOO. DLO stuck. What just happened uhh 9.55 I guess

BOOGERD – LU: Best FTY of the lot. Small hop back, never gets her chest quite over her feet but works it out fine. 9.775

BAARS – LU: She’s been hanging around in the exhibitions waiting for a chance. Now Mitchell isn’t competing and she has one. Solid full, hop back. 9.700! What a good effort from the freshman.

MCLAUGHLIN – GWU: Short on first handstand, archy blind change to Jaeger. Short on another one, short on a third one, FTDB with a hop back. 9.725 wait really?

I don’t know about you guys, but I would not have GW in the lead here. Neither team has been sparkling so far, but GW got 9.7s for some pretty messy bars routines there.

FRANKLIN – LU: Front thru double back, great. Switch half wolf full, scooted out of another leap, lots of drama in the choreo. Double pike great. Solid start. 9.750

ZONA – GWU: Interesting mount, turning while lying down, cat leap side aerial tentative with knees. BHS LOSO with MORE KNEES. Oof. Cat leap switch side, emphatic, think that was a punch front full with a hop. 9.700

Also the live score has stopped working! Love that.

ALEXANDER – LU: If this one doesn’t break 9.8 I quit. Double back, huge, not even really on the diagonal but in bounds easily. I LOVE this routine so much. One and a half front lay great, double pike. GIVE IT TO HER. 9.800.

RAYMOND – GWU: Switch half to split, a little chaotic but okay. BHS LOSO a little messy, side aerial, side aerial back full with a hop. 9.750

LEMAN – LU: Front lay front double full, little stumble. Switch half Popa. One and a half front pike, she’s literally only halfway across the floor when she finishes. Front lay to Rudi I think. 9.750

Well, Cohen should have gotten the highest score in that beam lineup and it’s a total mystery to me how the judges found three routines better than hers.

Less than a tenth in this. Honestly not sure I agree with the ordering but I have to save my discourse energy for later in the weekend.

BAILEY – LU: BHS LOSO, off line, swims to hang on and just about does but the Lions will need to drop this anyway. Split jump full, some other leaps, one and a half dismount. 9.650

CRASA – GWU: Front thru double pike. One and a half front pike, bit of leg sep in the middle, tour jete half Popa. Double back with an awkward landing. 9.825

BANEN – GWU: Double pike, bigger lunge, one and a half front lay to split super airy. Switch side Popa a little underrotated. 9.825

HENRY – LU: Full turn, BHS LOSO with a lean check. Wolf hop switch side. Side aerial with another check. Something to straddle half. One and a half dismount stuck.

ZOIS – GWU: Double pike, high with a hop, two and a half twist gorgeous. Switch ring tour jete half great, missed her twisting combo but it was good.

RAYMOND – GWU: Caught a one and a half front lay to close, bit of leg split but good. This has been over for a few routines. 9.800

George Washington advances! Lindenwood won’t be too mad about this. The Lions did let the meet slip away on beam, and given that they’ve got to compete next Friday and likely Saturday as well it’s probably for the best.

So the first vault and first bars of the day both won titles. Great.