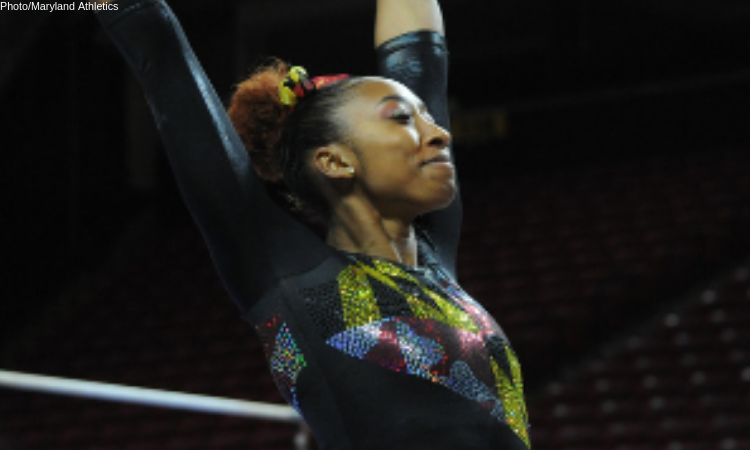 Anyone who’s seen a glimpse of Maryland’s stacked bars lineup will have recognized a new face this year in Tiara Wright, a transfer from West Virginia. Wright has made an immediate impact in College Park, earning spots in both the bars and beam lineups throughout the entire season.

For Wright, the opportunity to transfer was one that involved much more than gymnastics. “For me, the most important part of college and being on a team was feeling like I was at home and with a family, more than just teammates,” Wright said. “Maryland took me in like a family with open arms.” Wright also expressed that she is happy to be closer to her family back home in Wilmington, Delaware, which is only about an hour and a half away.

Maryland head coach Brett Nelligan said Wright’s style as a gymnast was instantly impressive when the opportunity came.  “You see that a lot of gymnasts in college perform similar skills or have similar routines, but what really sets people apart is when they have a little extra style,” Nelligan said. “Even the way she does bars has kind of an extra flair to it.”

Wright has not missed a meet in either the bars or beam lineup. She has never fallen on bars and has only fallen on beam twice, scoring a 9.900 on the former as a season high. Most recently at the Big Ten championship, she earned a 9.800, the second best score of Maryland’s rotation.

“Obviously, her scores are really helping us,” Nelligan said. “She’s a solid lineup spot for both bars and beam, and as we’re progressing we look to see her on floor next year as well.”

Immediately feeling at home helped Wright with the transition. “I’m loving every aspect of Maryland,” she said. “The girls welcomed me with open arms, and the academics are very good here too; it was the right fit for me.”

Nelligan also commented on the way Wright has emerged as a leader for the team in and outside of the gym. “She’s almost like a team mom, which is surprising since she joined the team later,” Nelligan said. “But I know the girls trust her and can go to her if they’re having a tough day outside the gym.”

The team atmosphere at Maryland has been what both Wright and Nelligan attributed to its success this season, in addition to the hard work put in the gym. “Teamwork is one of the most surprising things about college gymnastics,” Nelligan said. “When we’re at our best is when the team is behind one another, when they believe and feel confident in one another as well. The team camaraderie is so important to us.”

Maryland has had another solid season, having just qualified to regionals as a team for only the third time since the program joined the Big Ten conference. “We put in hard work day in and day out, and to go up there and see that hard work pay off feels great,” Wright said.

A fun way Maryland has celebrated all that hard work is its own contribution to the arsenal of “stick items” seen on teams across the country all season. Maryland boasts a stick tortoise shell a gymnast can put on her back.

“[Sophomore] Collea [Burgess] actually came up with it,” Wright said. “Once you finish a great routine and you stick it, you don’t just have the hype from your team and coaches; it’s like the icing on the top.”

Wright has worn the shell multiple times this season, and she doesn’t plan to stop. “I’m proudest of being able to step up for the team when I’m needed.”