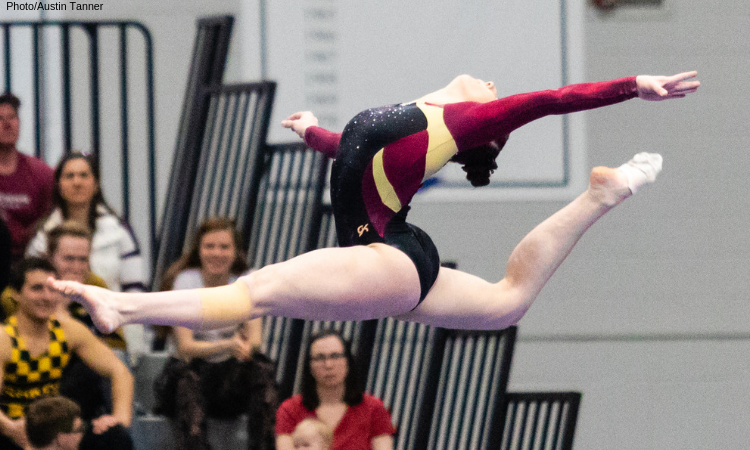 It’s no secret Rhode Island College had its best season in program history this year. The team broke eight school records—vault twice, bars twice, beam once, floor once and the team total twice—and bested its previous high SAS score of 180.6938 by over three points to finish the season with a 183.7250.

The road wasn’t easy though. The Anchorwomen opened the season with two double meet weekends that took a toll on the team both mentally and physically. The exhaustion led to inconsistency and doubt, especially on beam where nerves got the best of the gymnasts in early performances. “At some point, we stopped believing in ourselves a little bit and let the nervousness get to us,” senior Miranda Murphy said. “But then it was like there was a flip of a switch.”

Teammate and fellow senior Alli DiBiase added that this flip could be attributed to some wise words from first-year head coach Monica Nassi. “She just told us, ‘You look around and we fit in—no matter what the scores say, we have the same skills, same everything.’”

This ended up being the boost of confidence everyone needed to get back on track. “This is by far the most confident I’ve seen this team, out of my four years, on every event,” DiBiase said.

Both she and Murphy mentioned that Nassi’s plan and vision for the future of the program also played a major role in getting the team to where it was in 2019. “Monica was the change this team needed,” Murphy said. “She definitely brought a lot of challenges to the table for us. She gave us a timeline for when things needed to be done.” Although this was much different than previous years, DiBiase said it was a good change that allowed them much more time to tweak little things before crunch time at the end of the season, which resulted in the duo ultimately qualifying to the NCGA championships for the first time since 2017.

“We got here, and that was our goal. This meet was for us,” DiBiase, who ended her season as an All-American in the all around, said. “Everyone kept telling us to soak everything in, so that’s what we did.”