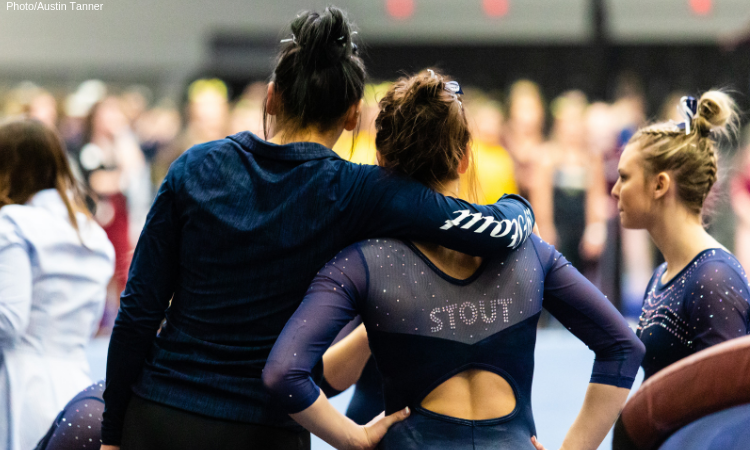 Just one short year ago, UW-Stout finished dead last at the WIAC championship. It was an outcome that shocked not only the team but also its fans, considering the team went into the meet ranked fourth in the conference.

This year was a different story.

The Blue Devils were a favorite to win the conference title and ended up coming out on top for the first time ever and claimed every single individual title as well. They then went on to finish second at the NCGA National Championships for the first time in school history. So what changed? How did the team go from eighth in the conference to sweeping the meet in less than a year?

Both head coach Becky Beaulieu and assistant coach Seth Helland agree that it’s synergy that the team and coaching staff has this year that drove its success. “There’s such a trust among this group—and we spell trust with a capital U and capital S, “Beaulieu said. “They are so hungry, and they train with purpose and trust each other and lean in. Life is about the adventure and not the destination, and so our only goals have been process goals and not outcome goals. Because of that, all the outcomes happened for them this year.”

Helland agrees, saying it was never about the numbers or the outcome and that when they were in the gym, the focus was on the girls, their gymnastics and anything the coaches could do to help them with the sport. Other distractions were left outside the gym, and all the success was due to genuine hard work.

Team culture is something that goes hand-in-hand with trust and was another aspect that Beaulieu emphasized as a critical component to the team’s success. Culture is a hard thing to change—especially when most of the team is returning, and there aren’t many new faces. However, she focused on making that a top priority this year as she recruited athletes and staff who all wanted the same thing.

“It’s 19 girls and two coaches that are all on the same bus going in the same direction,” she said. “It’s just really special.”

READ THIS NEXT: Golden Eagles Golden at NCGA National Championships