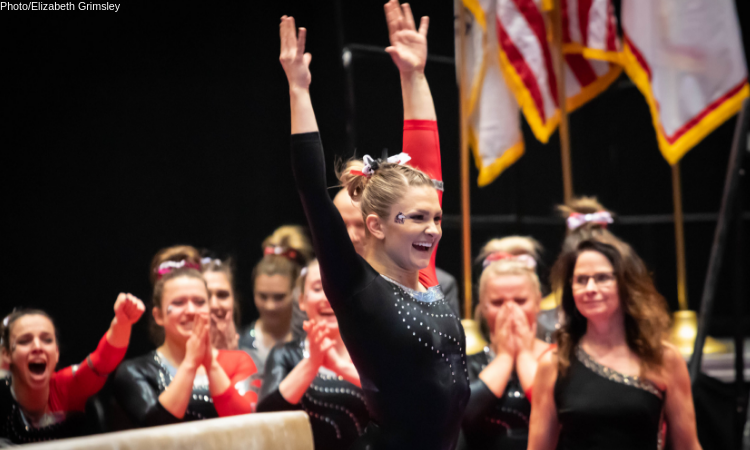 Northern Illinois head coach Sam Morreale is building a winning program. He has been in his role for eight seasons now and has been striving toward winning the MAC title since he started.

“This has been a long time brewing,” he said after his team scored a 195.975 at home in DeKalb, Illinois, on Saturday to overtake reigning champions Central Michigan and win the program’s first-ever conference title.

The team started the afternoon on floor, its best event; it put up a 49.300, which would be the highest rotation total for any team in the meet. Starting on floor, of course, means ending on beam.

“I’ve known the rotation for a long time, I knew it would end on beam, and it’s something that doesn’t scare us because we’re good on beam—to start on floor is what scares me,” Morreale said of the rotation draw. He was worried that having the team’s best event early in the meet would mean tight scoring, but applauded the judges for not shying away from giving big scores early.

Senior and floor anchor Anna Martucci led the squad with a 9.900; she won a share of the event title.

“I really feel like I owe it to them every single time,” she said of anchoring the program record-breaking lineup all year. “The energy that they bring to the event and the passion is unmatchable, so it’s been really fun for me.”

Martucci touted the team’s work in the gym all year, saying that every landing in every practice counts. Morreale agreed. “They’re not afraid of the work,” he said. “That’s the type of thing that helps you win championships.”

Morreale credited his seniors with solidifying the Huskies’ work ethic this year. “Our challenge to them is always to leave it better than they found it, and that in and of itself sets it up for the next class and the next class.”

In fact, some of 2020’s recruits were in the stands to watch the historic win, and they want to do it again next year. “We want to be back-to-back. I don’t want to be a one-timer, a flash in the pan,” Morreale said.

He looks to Central Michigan as his motivation. The Chippewas, who finished second with a 195.575, were the MAC regular season champions and have taken the conference crown six of the previous nine seasons.

Central Michigan ended the meet on a bye, having tallied its final score in the sixth rotation. It watched as Northern Illinois took to the beam. Martucci said the beam team didn’t know the score it needed going into the final rotation.

Then, Cinny Lamberti had a few errors in the fifth spot. She managed to stay on the beam, and her 9.600 was enough to just put the Huskies over the edge for the win. However, the team didn’t realize it had clinched as Mia Lord began her routine in the anchor spot since the video board scores took awhile to update.

“Then Mia just knocked it out of the park,” Morreale said. Lord scored a 9.900 and won a share of the event title. Both Lord and Catherine Biddle, the leadoff, are beam specialists. They waited all day to put up those crucial routines. Morreale said it takes an “incredible athlete” to do that.

Martucci, whose 9.850 in the final rotation was the team’s second-highest score, said, “We wanted it so bad and we fought for it, and that beam squad was relentless.” The Huskies’ 49.275 on the event is a new program record.

That is the third program record the Huskies have recorded in 2019, after breaking it twice on floor. “It’s chemistry. They’re hungry for it,” Morreale said of why this team has had so many breakthroughs.

Martucci and her fellow seniors—Emily Basara, Ally Ferber and Paige Nicholas—will leave a big legacy in DeKalb. “They’re leaving behind a MAC championship!” Morreale said. And while he is already thinking about doing it again next year, he isn’t forgetting to enjoy the moment.

When Lord’s 9.900 flashed, the team slowly started to realize what had happened. Gymnasts began to cry, and the alumnae in the stands stood up and cheered. Suddenly, when the team total on the scoreboard updated, the team erupted with emotion.

“We’ve been knocking on the door, and we knew we were getting close, but to watch these kids finally step over that line? It’s just the coolest feeling,” Morreale said.

Like what you see? Consider donating to our efforts throughout the year.