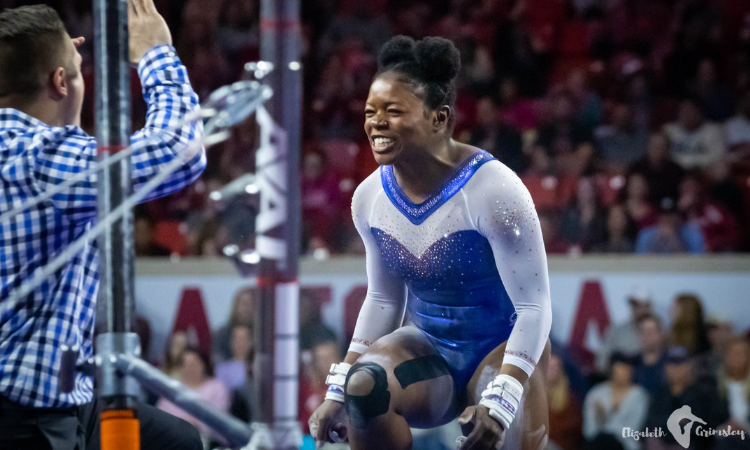 Welcome to session two of this year’s SEC championship! The night session features the top four teams in the conference as determined by NQS, which are (in order): LSU, Florida, Georgia and Kentucky. The Gators won the regular season title, but have an NQS 0.05 lower than the Tigers, so they have to settle for the second seed.

LSU enters as the two-time defending champion, with Florida finishing as the runner-up both years after winning the title in 2016. With both teams having an NQS about half a point higher than the rest of the session, I would peg these two as the main contenders for the title.

The Gators defeated LSU when the two faced off in the regular season, which snapped LSU’s home win streak that had been going since the 2014 season. The Tigers are entering this meet on a two week 198 streak and are certainly looking for revenge against Florida. Also, the all around battle between Sarah Finnegan, Trinity Thomas, Alicia Boren and Kennedi Edney is going to be amazing, so buckle in.

While slight underdogs, Georgia and Kentucky will definitely factor into individual event battles as well as the team race if Florida and LSU aren’t hitting. Sydney Snead of Georgia will certainly contend for the vault title, as well as the all around podium, and Kentucky’s Mollie Korth could honestly finish top three on any event, including the all around. The key for Georgia will be avoiding literally any mistakes on bars with Emily Schild now sidelined with an injury, and the Wildcats will have to hit their first three events and then rack up the big scores finishing on beam, their best event.

LSU will be rotating in Olympic order as the top seed, Florida will start on bars, Georgia on beam and Kentucky on floor.

Lineups for session two! #secchamps Skaggs in AA again for @GatorsGym, Thomas now anchoring bars, and Gowey back on BB! Kelley in vault for @LSUgym and Ferrer instead of Dean on bars, Priessman in on FX. Warren in BB for @UKGymnastics for Poland. Georgia looks normal #ncaagym pic.twitter.com/NrgZTcMoFF

This morning’s session saw Alabama post a 197.350 to take first in the session and set the bar for this evening’s teams to beat. Arkansas finished second with an 196.475, Auburn finished third with a 196.375, and rounding out the early session was Missouri posting a 195.900.

Event leaders after the first session are Amanda Elswick (Arkansas), Derrian Gobourne (Auburn), and Lexi Graber (Alabama) on vault with 9.9’s, Sarah Shaffer (Arkansas) on bars with a 9.9, Graber on beam with a 9.95, and Graber and Ariana Guerra (Alabama) on floor with 9.925’s. Also, Graber leads the all around standings with a 39.650.

You can follow along with live scores and the meet will be on TV on ESPN2! WatchESPN will also have all the different event feeds if you’re trying to watch one specific team.

Finnegan (LSU): Yfull gorgeous in the air. Just a tiny movement on the landing. 9.900

Hyland (UK): her music is Finesse and she’s definitely finessing this choreography. Great leap series. Good height on the wolf full. RO 1.5 to punch layout beautiful form in the layout.

Florida jumps out to the early lead because LSU couldn’t get more from those vault landings. Bobbles from Oakley, Magee, and Baumann kept the Georgia scores low and Kentucky unfortunately had some misses early from Stuart and Warren that will be hard to bounce back from.

Edney (LSU): played side by side with Boren. syncronized stuck dismounts

Thomas (UF): forward roll mount. switch half to beat jump. one-arm-bhs loso some wobbles on the landing. front aerial to wolf so high in the jump. dismounts with a double full and slide back.

Florida was bringing it on beam! LSU did its job on bars, however, beating out Florida’s score on that event by .05. Vega missed an opportunity on floor to bring in a huge score for Georgia (personally, I think it was underscored – a 9.825 for one slightly short landing?) but the GymDogs are hanging in there. Kentucky missed some landings again and if these small mistakes continue the Wildcats might get beat by Alabama from the first session.

Nixon (UK): a bit late on a full pirouette and a hop back on the double tuck dismount.

Dean (LSU): side aerial to bhs. some knee form issues. split jump to split side. front aerial with a confident finish. side aerial to layout full stuck.

Dickson (UGA): half-on front pike off with wayyy too much power and takes several bounds forward. missed opportunity for a big score there.

Lukas (UGA): solid double full just a hop to the side.

Campbell (LSU): bhs loso. small check on the full turn. front aerial to sissone nice split. switch leap to switch half. best switch half of the night so far. RO double full with a small hop.

Thomas (UF): RO bhs double layout. I don’t think she could take it and higher. front layout to front full. looks so easy for her. tour jete full with a controlled lunge. RO bhs double pike with a small slide back. great routine.

Finnegan (LSU): wolf turn. bhs loso with all the toe point. switch leap to switch half. side somi very nice. side aerial to layout full with perfect form. ends the rotation strong with a 9.950!

A much improved rotation for Kentucky! The miss for Dickson on vault was costly for Georgia but Snead’s 9.9 at the end helps. A few wobbles on beam kept the scores lower for LSU than what they could’ve been but the Tigers were able to make up some ground on Florida with that one. Skagg’s near fall and Reed’s OOB opened the door just a bit, so Florida is going to NEED to find those landings on vault with LSU ending on floor.

Skaggs (UF): Yfull nice in the air and just a tiny hop.

Harrold (LSU): opens with a double full just a Shawn Johnson amanar step to the side. RO bhs double pike and redeems herself with that landing. good leap to switch half. ends with a RO 1.5 to punch layout and controlled landing. good start for LSU if its going to mount this comeback.

Alexander (UF): Yfull. nice in the air again and a good landing but not stuck. more controlled for her than usual though!

Schoenherr (UF): Y1.5. just some knees in the air and short so a slide back.

Florida finishes with a 197.750. LSU will probably have to mess up to not win… but this is gymnastics. Nothing is guaranteed.

Kentucky and Georgia have been killing it this rotation! Too bad we’re not getting to see much of it…

Finnegan gets a 10! LSU claims the title before Kelley even competes to close out the meet.

It was an exciting one! Florida needed to be just a little bit better on those vault landings, especially the 10.0 start value ones, and/or avoid those mistakes on floor and this could’ve easily gone either way. LSU kept it close through the first three events, like it needed to, and then destroyed that floor to take its third consecutive title.

With their struggles, Georgia and Kentucky got beat by some teams from the early session. Georgia finishes third overall and Kentucky seventh. But both team’s had fantastic final rotations to finish their championships on a good-note!

LSU may have gotten the best of Florida today, but in the postseason I expect both of them to be battling it out, not only for SEC supremacy, but possibly for an NCAA title as well.

Check out the Twitter Moment for the social media take on these championships!