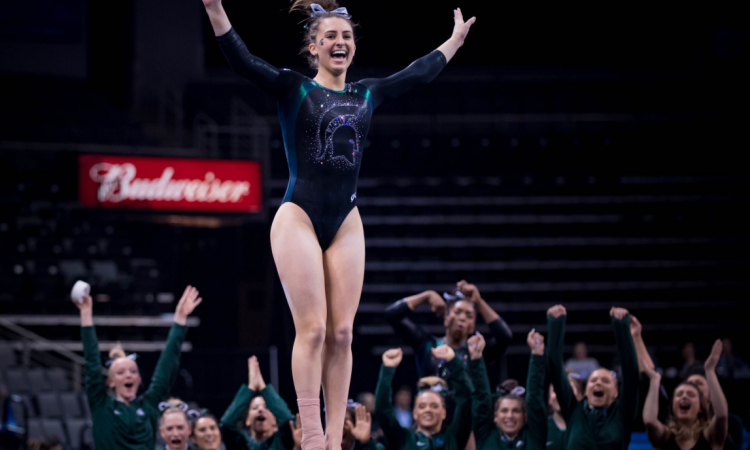 For this afternoon, we have an exciting quad meet with four teams that have come a long way this season. Two (Michigan State and Rutgers) are mathematically locked out of regionals, so they’ll see today as a way to go out with a bang and generate a little early excitement for 2020 (we already can’t wait!). Maryland and Ohio State, being in the somewhat lower rankings of qualifiers, will want to improve their NQS just a little more here to get the best seeding they can going into postseason. Bars for Maryland and floor for Iowa are where they’ll seek to rack up the big scores to make it happen.

Hall BB (Rutgers): Front toss to back swingdown with some legs. Switch half. Full turn with a small check. Tuck 1.5 dismount with a step. 9.700

This broadcast y’all…trying my best but they don’t seem to enjoy showing love to all routines. 🙁

Beatty VT (MSU): Another chest down on the landing with a step back on her full. 9.675.

Betancourt BB (Rutgers): BHS layout, pretty piked down. Perfect full turn. Off on her split 3/4…and just as Alina was saying that Rutgers is “sure of themselves…” Oh no, side somi and she’s off again. Needs to be dropped, of course. 8.300

Douglas VT (MSU): Another 1.5 with a step to the side, smaller than Ewing’s. Another solid landing compared to the first two. 9.775.

Peterman UB (Maryland): Big Jaeger. Great handstands. So much distance on the DLO and another stick. 9.775.

Barber UB (Maryland): Hindorff not as high as her usual but still good. Nice DLO, big distance and a stick. 9.900.

Perez FX (tOSU): First time anchoring the lineup in place of Stone. Double pike chest slightly down but controlled landing. Love this music! Front lay to front full tiny step. Huge double tuck but off on the landing with her leg up in the back. Still solid! 9.750.

Maryland wasn’t as on-point as it usually was on bars today; let’s see if they can build more momentum going into floor. I’m really impressed with Ohio State, who recovered well without the critical presence of Stone.

Brown UB (MSU): Missing some of the handstands. Tkatchev between the bars, not terribly high. Double tuck dismount with a small hop. 9.725.

Peterman BB (Maryland): Wolf turn full to start. Slightly off on the series, leg goes up but she stays on the beam. Shakier than usual today. Back 1.5 legs a little weird. 9.500.

Wright BB (Maryland): Front aerial with slightly bent legs, back LOSO much better. Off on her front toss. 8.950.

Ali FX (Rutgers): Full-in with a slide back. Straddle leaps nice position. Front tuck through to double back. So much personality in this routine. 9.850.