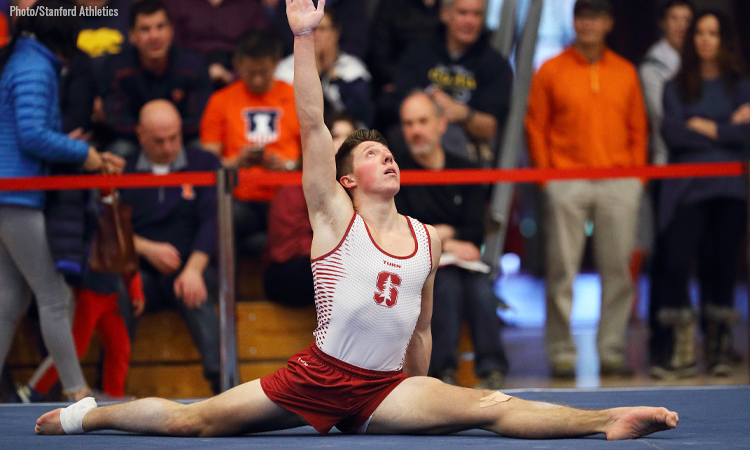 There may only be five meets this weekend, but each one of them carries big standings and postseason implications. Two Big Ten meets where the rankings couldn’t be any closer will bookend an Oklahoma road meet where the Sooners need to put up a big score to retake the top ranking before championship season begins.

Why You Should Cancel Plans For It: The top three ranked teams in the Big Ten will all square off with the regular season title still at stake. To say this should be a close battle would be an understatement. Illinois comes in ranked the highest of the three on pommel horse and vault, Penn State on rings and high bar, and Michigan on floor and parallel bars. Michigan’s Cameron Bock, Penn State’s Sam Zakutney, and Illinois’ Alex Diab will all need to be on fire to keep their teams in the race, but each of their supporting casts of gymnasts will be difference-makers.

What Else You Should Know Before Tuning In: In the race for the Big Ten regular season title, Penn State has a record of 1-1 while Michigan and Illinois sit at 2-1.

Why You Should Cancel Plans For It: Separated by only one tenth in the rankings, this Big Ten dual meet should be just as exciting as this weekend’s Big Ten tri-meet. Ohio State has more star power with former world team member Alec Yoder on its roster, but the Buckeyes have fallen prone to inconsistency at times this season while Iowa has been more consistent all season long. The Hawkeyes have a lower higher score than the Buckeyes and only outrank them on one event—high bar—but Ohio State shouldn’t underestimate Iowa as it has done enough to pull off upsets against higher ranked opponents in Michigan and Nebraska two weeks in a row.

What Else You Should Know Before Tuning In: Ohio State sits at 2-2 in the Big Ten regular season standings while Iowa has a share of the lead with a 2-1 record.

Why You Should See the Error of Your Ways: While Army shouldn’t have much of a problem winning the team title, this meet will feature several individual routines and event title battles worth watching. Army, though, does need a good team score to keep itself in position to make the NCAA championships later this year, so look for freshman Matt Davis and senior Cole Casanova to impress in the all around and boost the Black Knights. William & Mary gymnasts David Watkins, Cutter Fugett and Andrew Lyubovsky have each won several event titles in the past few weeks, so look for that trio to test the Army gymnasts for the top spots. Springfield’s Stephen Lewis, if competing six events, can challenge Casanova and Davis in the all around, while Temple will look to put up a big score to continue its resurgent season.

Why You Should Clear Space on Your DVR: After Oklahoma dropped to second in the rankings this week due to having lower road scores than Stanford, the Sooners will likely be firing on all cylinders as they aim to retake the top spot. Navy won’t factor into the team picture, especially after Oklahoma’s NCAA-leading 425 last weekend, but the Midshipmen have several gymnasts who can steal some top three finishes from Sooners if they hit their routines to their potential. Navy will also be trying to put up a big score to help solidify its place as an NCAA championships qualifying team.

Why You Should Clear Space on Your DVR: As the highest ranked team yet to break the 410 barrier, Minnesota will be looking to do so to try and reassert itself amongst the top three Big Ten teams once again. Air Force will also be hoping for a high score, as it sits a few points behind Army in the rankings for the 12th and final spot to qualify for the NCAA championships. If the Falcons want to compete in Champaign, Illinois next month, they will need to start making moves now, and this weekend will be key for them.

READ THIS NEXT: The Mount: Week 11 WAG