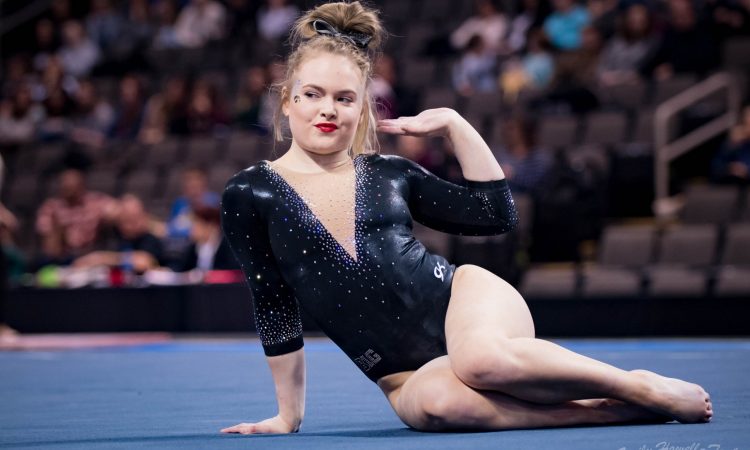 This is the first meet of Washington’s two-part senior weekend, and they’ll be hoping that sympathetic senior night scoring extends to tonight. This squad has been held back by a slew of presumed injuries and a bizarrely shaky beam rotation and hasn’t looked like a serious 197 threat yet this year. That said, this weekend is a great opportunity for a ranking improvement—the Huskies’ top four scores in 2018 are all road scores, so the sky is the limit in terms of NQS.

It’s been a few weeks since I’ve gotten to watch Sacramento State compete, so I’m excited to see the Hornets’ improvement after a dismal January. Iowa is also soaring, scoring its highest three scores of 2019 in the last three weeks, and with a 194.700 to drop it could easily buy itself a few ranking spots with another strong day here.

Evanni Roberson is out for the day with a broken toe and also there is no audio so everything is about to be REALLY fun.

Apologies in advance for any skill ID mistakes. I’m a little fried already and this broadcast is challenging.

KOETH – CSUS: We got two separate stretches of her hanging around under the bars and no gymnastics.

GILCHRIST – IOWA: Cat leap side somi, gainer pike stuck. That’s all we get. We watched it twice, though.

HOFFA – UW: Another really nice full with a step back.

COPIAK – UW: Solid full, bit of pike which is typical for her but she’s got so much more landing control this year.

KONE?? – CSUS: Full in dismount with a step back.

SAMPSON – CSUS: Blind to Jaeger, blind to double front with a step forward. Landing onto an eight incher seems scary, but if that’s what you’ve got to do for ankle reasons I get it.

CHOW – IOWA: Side aerial to split, switch half to split, questionable positions.

BRENT – CSUS: Stuck full in dismount! Chest way down, but she’ll take it. She was the saving grace of Sac State bars before Sampson was back,

VANCE – IOWA: Off on an aerial round off. Really nice switch half, side aerial back full dismount great.

Another fall from Iowa. I kind of think we’re in exhibitions now, couldn’t say for sure.

We panned across some gymnasts from different teams. I didn’t have time to identify them. I feel bad about that. Sorry, friends, you’re great.

WASHINGTON – UW: Gienger is great, FTDB dismount half laid out and weirdly landed as usual.

GREENWALD – IOWA: Two and a half punch front, landed it all the way off the floor. Switch side Popa Popa,

SCHMEISS – CSUS: Popa!! Love it. I probably say this every time. Gainer full off the side stuck.

THOMPSON  UW: BLind to Jaeger, she’s not the most natural bars gymnast but has worked really hard on handstands. Might have missed one there, full in with a step back.

KAJI – IOWA: We didn’t see skills but it’s nice to see her existing.

The stream died a bajillion times but I’ve got it working for a second.

BROOKS – WASHINGTON: Was too busy trying to sort the stream out to catch all of this but it looked like a hit.

BRAIDA – CSUS: Great Rudi, looks like that was her last pass.

RILEY – UW: BHS LOSO… off line, tries to correct, falls. Full turn, split jump straddle quarter, split to LOSO to beat. One and a half dismount.

ROSE – UW: Fascinating that she’s in the 4 spot now. She’s also been playing around with different composition to see what works on her mostly busted knee. Cat leap front aerial BHS, GORGEOUS. Full turn, switch to split leap, cat leap side aerial tuck full with a hop. One of her best this year.

Now we’re watching Chad rifle through Elise’s binder while other events happen, which I love. Honestly it is pretty interesting.

COPIAK – UW: Full turn, BHS LOSO solid. Cat leap switch side, side aerial, one and a half dismount, forward onto her toes but more or less hangs onto it.

NELSON – UW: In the anchor in place of Roberson, who’s yelling from her scooter. BHS LOSO, floaaaats. Full turn, split split 3/4. Split, leans way forward to pull back into the LOSO. 3/2 twist a little underrotated but solid.

Ruttan in the anchor. First time we’ve seen her this year. Front aerial, slight adjustment, goes for it again, into the back tuck this time. Orphan beat jump, full turn, switch half to beat. Side aerial back full. Looked a little nervous but potential is there!

Hornets are having a MEET. Their season high is only a high 192, so this could be a landmark.

BROOKS – UW: Double back, front full front lay I think… her wolf 3/2 is still super chaotic but she needs it for start value at this point. Had an OOB.

RILEY – UW: Double pike I think to start, I blinked. One and a half front lay, solid, so far this is the best she’s done this year. Double back to close, really solid. Nice!

CUNNINGHAM – UW: Front thru double back, overpowered, extra step. One and a half front lay and works the steps out into her dance.

THOMPSON – UW: Double back, a bit too much gas but keeps it in place, tour jete full. Rudi to close.

I’m not trying to ignore the other teams. They’re just not making it to the broadcast this rotation. I promise I love and adore them.

CHOW – IOWA: Blind to double front, a touch deep with a hop back. Think it was her anyway. Camera never caught her face.

WASHINGTON – UW: Double back, scoot back out of it. Front layout front full, double pike solid.

Huskies not on top of these landings today, but it’s going all right. Everything just feels weird today.

Mind-bogglingly amazing day for Sac State after the season it’s been having. The Hornets are digging so deep and still improving despite a trash year of injuries. Super cool. Pity we never saw much more than two skills strung together, but what can you do.

Washington got its best score of the home season, and it’s about time. This’ll also be a nice little RQS boost, and with another home meet coming up on Sunday the Huskies could go even higher.